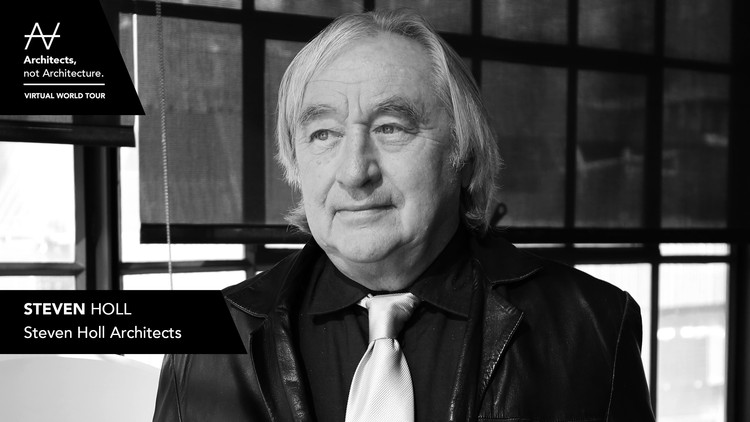 The international event format Architects, not Architecture is known for inviting some of the most influential architects of our time and asks them to talk about their path, influences, and intellectual biographies. With its new event series, „AnA“ brings the architecture community a bit closer together by taking attendees on tour around the globe to “visit” selected cities and virtually meet two of their renowned practices.

The list of countries includes Singapore, Australia, the United Kingdom, France, Denmark, the Netherlands, South Korea, China, Ukraine/Lithuania, Mexico, and the United States. You can find the complete list of events at www.architectsnotarchitecture.com.

Archdaily is bringing you a selection of the World Tour’s most celebrated talks. Today, Steven Holl:

Steven Holl is the founder of Steven Holl Architects and is considered one of America’s most influential architects. He specializes in seamlessly integrating new projects into contexts with particular cultural and historical importance and has been recognized with a long list of architecture’s most prestigious awards and prizes. He is a tenured Professor at Columbia University’s Graduate School of Architecture, Planning, and Preservation.

Steven Holl takes us on a journey from the return of his father after the invasion of Japan to his deep friendship with Zaha Hadid.

Growing up in Manchester, Washington, Holl would spend his free time as a kid building little houses and painting in the designated basement.

As he grew older, his creativity and passion for building brought him to Washington University, where he studied architecture and encountered professors who profoundly impacted his worldview and approach to architecture.

Holl is an artist of light, an element which he knows how to stage and play with skillfully. He honed this instinct when he lived in Rome and got up early every morning to study the light in the Pantheon before the tourists flocked in. Every year, he finds himself traveling to that magical place.

After he collected valuable memories in Europe he returned back to the United States, a country at war with Vietnam at the time. He finally moved to New York City where he would later establish his own practice to enrich the cityscape with his innovative designs.

Founded in Hamburg in 2015, the international event format Architects, not Architecture brings to stage what usually goes unseen. At each of its events, two well-known architects are asked to speak about themselves instead of their award-winning international projects. They talk about their path, influences, and experiences as they dive deep into their intellectual biography. This enables a better understanding of their work without them even mentioning it.

Last year, “AnA” opened its archive to create a source of inspiration and entertainment by sharing some of its unique talks from the first 35 events. Archdaily brought to you some of the talks in full-length by speakers including Daniel Libeskind, Tatiana Bilbao, Dan Stubbergaard, Mario Botta, Sadie Morgan and Kjetil Thorsen.