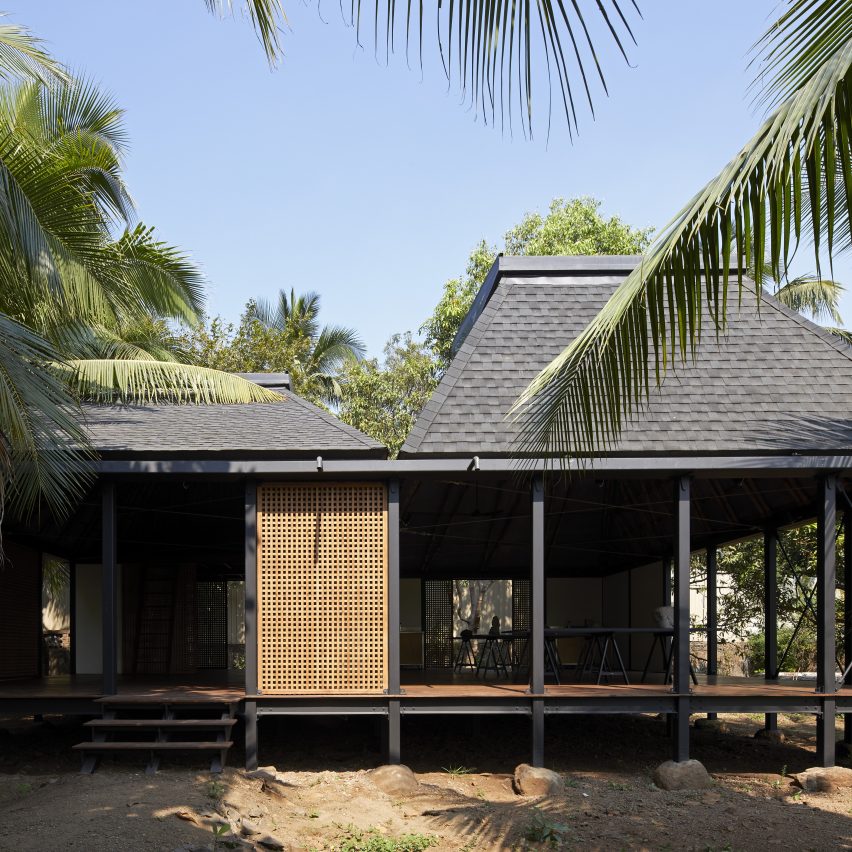 Mumbai Artist Retreat is a steel and bamboo cabin built by Indian studio Architecture Brio in the coastal town of Alibag that’s raised on stilts to withstand rising sea levels.

Built next to the sea in Mumbai Bay, the project is an attempt by Architecture Brio to reconcile the attraction of living by the sea with the risk of climate change.

“Many coastal areas around the world are facing an immense dilemma,” said the studio. “Coastal areas are however some of the most desirable places to live and work.”

The retreat is divided into workshop space, a place for short-term residents to stay, and a long-term accommodation area.

Facing the metropolitan centre of Mumbai from across the water, Mumbai Artist Retreat is designed to be a rural retreat for artists looking to create in nature but keep the city skyline in sight.

Of all the cities in the world, Mumbai is the second most at-risk from rising sea levels caused by climate change, according to a report published in August 2020. The site of the artist’s retreat is a coconut plantation by the sea and is very low lying and prone to flooding.

Architecture Brio raised the whole structure on stilts so that it can survive encroaching tides. The building is also designed to ultimately be temporary – it can be taken apart and rebuilt on higher ground.

Stone boulders of basalt, excavated during another construction project nearby, form the supports for each steel column. Notches chiselled into the top of the rock anchor each stilt.

The lightweight steel frame of stilts, beams and columns was prefabricated off-site to minimise disturbance to the local wildlife, then slotted together with a nut and bolt system.

“Indian bamboo often suffers from irregular shapes and diameters. In order to avoid the natural irregularity of the bamboo from becoming distractive, the layout of the rafters follows a zig-zag pattern,” explained the studio.

“While the framework is exposed from the inside, on the exterior, a lightweight roofing of cement sheets cover the bamboo framework.”

The skylights have integrated solar panels that generate power for the retreat. These panels can be opened like a window, to draw warm air up and out of the building to cool the space below.

Side panels made of slatted timber can be moved between the steel frames to shade certain parts of the workshop while leaving other sides open to generate a breeze and give unobstructed views of the scenery.

Because the groundwater table is dropping, water on the site is salty. Architecture Brio dug a water harvesting pond on the site to replenish the water table, provide fresh water during the summer, and make a habitat for birds and fish.

“The Mumbai Artist Retreat is conceptualised as a community space,” said Architecture Brio.

“It is an art lab of sorts, that aims to bring together art, ecology and society. It will bring people from diverse backgrounds together to engage in various forms of artistic expression in a creative and critical way.”

Architecture Brio was founded by Shefali Balwani and Robert Verrijt in 2006 and is based in Mumbai. Previous projects include a concrete weekend retreat that straddles a stream in Alibag, and a holiday home half embedded in a riverbank in the foothills of the Western Ghats.