“Architecture is Like Writing a Song”: In conversation with Rick Joy 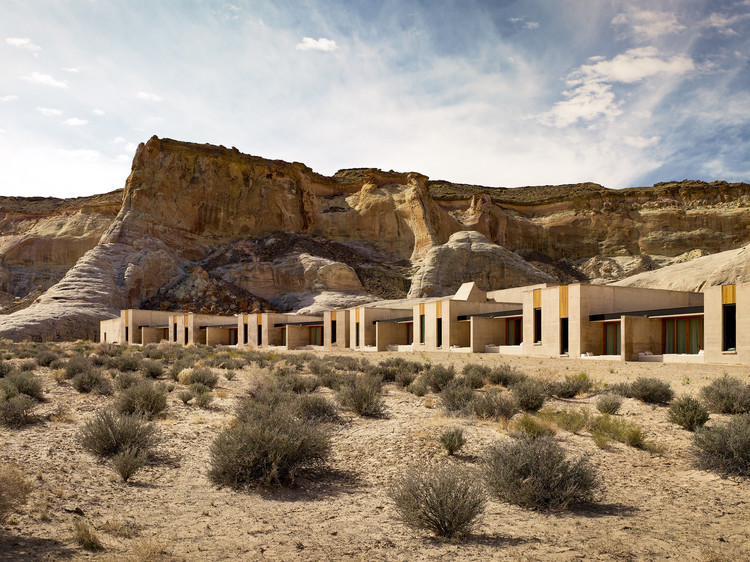 13 Apr “Architecture is Like Writing a Song”: In conversation with Rick Joy

Vladimir Belogolovsky speaks with American architect Rick Joy about his early inclinations towards architecture, what kind of architecture he likes to visit, and about designing his buildings as instruments.

Known for his poetic buildings, particularly houses in the Sonoran Desert, United States, that celebrate beautiful rammed-earth building technique, Arizona-based architect Rick Joy is somewhat a cult-like figure in the profession, consistently captivating students and young aspiring architects who keep coming to his mid-size practice in Tucson from all over the world. Joy, who was born and grew up in Maine, moved to Arizona in 1985 at the age of 28 to study architecture with acute attention to the local lifestyle, climate, fauna and flora, and indigenous building techniques. He formed his practice in 1993 and immediately started attracting national and international media attention to his local works, particularly for their masterful use of rammed-earth walls.

Over the next almost three decades, Rick Joy has built dozens of works in a variety of scales and places, including an apartment building, Tennyson 205 in Mexico City (2019); Princeton Transit Hall and Market in Princeton, New Jersey (2018); Amangiri Resort and Spa in Utah (2008), and dozens of single-family houses in Arizona, New Mexico, California, Idaho, Vermont, and in the Caribbean. The following interview is a condensed version of my recent conversation with Rick Joy over Zoom video call between New York and Tucson, Arizona, in which Joy discussed his early inclinations towards architecture, who was the first architect he felt a special connection with, what brought him to Arizona, what kind of architecture he likes to visit, and about designing his buildings as instruments.

“We Produce Nothing; We Package a Dream”: In Conversation with Totan Kuzembaev

Vladimir Belogolovsky: Let me start with one of your quotes, ”A house is a strange bird because it can go in so many different directions.” It is very true, but as an architect you know in which direction it wants to go, right?

Rick Joy: In a way, yes. But a lot is driven by the client. And over the course of my career, I am reluctant to develop a signature style. So, I see all my projects as very different buildings. I see my responsibility in achieving something unique by responding specifically to each of my clients’ desires. It is not about me or even about my team. It is about the offering to each client.

VB: You are originally from Maine where you were trained as a classical percussionist and spent over a dozen years performing as a professional drummer. Then in 1985, at the age of 28, disillusioned with the lifestyle of a musician, you decided to study architecture. Quite late, right?

RJ: Sure, I had some of my professors who were younger. [Laughs.] Yet, it took my older son the same amount of time to figure out what he eventually wanted to study –architecture. So, he applied to architecture school at the same age, 28. He is now in his third year and determined to graduate. But I did tell both of my sons that if they didn’t know what they wanted to pursue in life by the time they were 28, I was not going to pay for it! [Laughs.]

By the way, I haven’t given up on being a drummer. [Joy points to a drum, sitting within his arm’s reach]. You know, when I was in high school my guidance counselor said, “Rick, you have the highest IQ among our students here. But you also have the lowest grades.” He then suggested that I would be either a good architect or an air traffic controller.” And now that I constantly need to be able to juggle clients, contractors, builders, my staff, schedules, lectures, and trips, I can see the connection between these two, seemingly very different professions. [Laughs.] But, in a way, I always liked architecture, intuitively. Since age five, I was already drawing Paolo Soleri-like underground utopian cities on long rolls of paper that my father, who was working as a printer, would bring home.

VB: Have you come across any particular building that may have inspired you to go into architecture?

RJ: When I told my art teacher at Maine College of Art in Portland, Maine where I studied color theory, sculpture, and photography that I wanted to pursue architecture he recommended me to go visit the Haystack Mountain School of Crafts in Deer Isle, Maine [1961] designed by Edward Larrabee Barnes [1915-2004]. I fell in love with the ocean-front campus with its vernacular style pavilions raised on stilts and interconnected by a series of walkways. Larrabee Barnes became my first favorite architect. And the first publication I ever purchased on any architect was his Museum Designs paperback brochure. And a few years ago, when I was working on my Princeton Transit Hall and Market project on Princeton University campus, it was especially rewarding because it directly faces his New South Building there.

VB: You went to study architecture at the University of Arizona, on the other end of the country. Why specifically Arizona?

RJ: Because my musician friends kept asking me to play as a drummer, which would make my study at home impossible. So, I decided to find an architecture school as far away from my home state as possible. And when I discovered the University of Arizona, I fell in love with the place before I ever got there. Originally, I planned to return to Maine. But right after graduation, in 1990, I found my first job with Will Bruder Architects where I stayed for three years, working on Phoenix Central Library. By then I decided to stay here in Arizona and in 1993, I started my own practice. The amazing thing for me was the contrast between my home, Dover-Foxcroft in the heart of Maine in the Northeast corner of the country, and Tuscon, Arizona in the Southwest. When you move to such a completely different place from what you know, you notice things much more acutely – cacti, mesquite trees, lizards, rattlesnakes, spiders – you really need to learn a lot about the place, climate, its fauna, and flora. To me, it was incredibly fascinating. Gradually, I developed a lot of knowledge about this place, the Sonoran Desert.

VB: When I talk to architects, I typically list a few quotes from previous texts and interviews, and I ask them to elaborate on them? Could we go over a few of yours? And if you don’t want to elaborate you could just confirm if you did say it.

RJ: Well, if you think about it, a plan is about cutting a section and looking down. And a section is looking sideways; they are both sections. I learned that by looking at Louis Kahn’s beautiful drawings, in which plans and sections are shaded the same way. Also, I am convinced that a plan informs a section and vice versa; they become integral to one another.

VB: “A house as an instrument”

RJ: I said that about Desert Nomad House where each of the three volumes is a kind of single-aperture instrument attuned to a specific performance. That’s also an example of a proposition for a lifestyle. And here in the office, we say, “What if?” a lot. That’s how we often title our projects in the very beginning, “What if?”

VB: And some of your houses become instruments quite literally because of how they amplify a passage of water, air, or how their parts move, right?

RJ: That’s true. For example, when some of our metal roof houses go through great temperature swings, they cause expansions and contractions resulting in distinctive sounds. Or, take our Catalina House that was designed for the client who is now 93 years old and still lives there; his bedroom has a sloped ceiling that acts as an instrument – it captures the early morning sun, brightening the ceiling’s refined cherry wood texture that ignites the whole room. He wakes up to it; that illuminated ceiling is his alarm clock. The whole house is full of circumstances that were designed to react to all kinds of very specific events or needs. Or, in our more recent Bayhouse that we did for an elderly couple, there is no garage door; the car comes to the front porch and there is a specially designed copper handrail-like groove line to help to navigate them from the car to the entry.

VB: And finally, “The act of looking through the window is more important than the window itself.”

RJ: Well, that comes from Juhani Pallasmaa. He said that, underlining what I mentioned earlier about referring to architecture as a verb not a noun. And I follow that direction starting with my very first project, the Convent Studios, the tightly clustered adobe courtyard residences. I said – let’s have a gate that opens on a courtyard with a tree. I want to make that gate really special, and I want to make sure it squeaks when you open it. Then once you close the gate you walk towards the studios and you hear the gravel stones hitting each other under your feet. And then there is a fountain and you hear the water flowing, and you hear the rustle of the weeds. And the shadows on the walls. And the tree in the courtyard is leaning, which hints how to find your door. In a way, architecture is like writing a song. Architecture is so stimulating in its own right, but you can push it, even more, to make it thought-provoking and exhilarating.

VB: What do you think about the state of the current creative climate in architecture and who do you feel most affinity with here in the U.S. or around the world.

RJ: I think the times now are very dynamic. As far as my own work I am closer to such architects as Marlon Blackwell in Fayetteville, Arkansas, and Eddie Jones in Phoenix. And outside of the United States, I would name Peter Stutchbury in Australia. Of course, we are not in competition. But there is an interesting conversation that keeps unfolding among architects from Arkansas, Phoenix, Tucson, Albuquerque, Portland, Seattle. We all have very strong connections.

VB: When asked to talk about some of the most inspiring examples you talked about the Phoenix Public Library by Will Bruder, the project that you worked on right after college. What buildings built in America in the last 20 years would you single out as the most inspiring to you personally?

RJ: What would I want to go visit most? You know, when I travel all over the world, which I do often, I rarely go look at buildings. If I am in Paris, for example, what I would enjoy most would be simply sitting in a café, watching people go by. Of course, if I am in Scandinavia or some other places where you find so many great buildings, I would definitely try not to miss the opportunity to visit them. And whenever I go to Boston, the only architecture I really want to visit is the MIT Chapel [1955] by Eero Saarinen. I know the building very well. And I typically go to the basement, behind the altar, to turn on all the lights.

RJ: Yes. But I appreciate great humanizing virtues equally, whether architecture is ancient, modernist, or contemporary. I enjoyed visiting the Lincoln Center redevelopment in New York by Diller Scofidio + Renfro [2009]. I always enjoy visiting great buildings in Chicago; among more recent buildings I would name Jay Pritzker Pavilion by Frank Gehry [2004] and Modern Wing at the Art Institute of Chicago by Renzo Piano [2009]. And if you ask me –What one building do I want to visit in America? I will name Grace Farms in New Canaan, Connecticut by SANAA [2015].