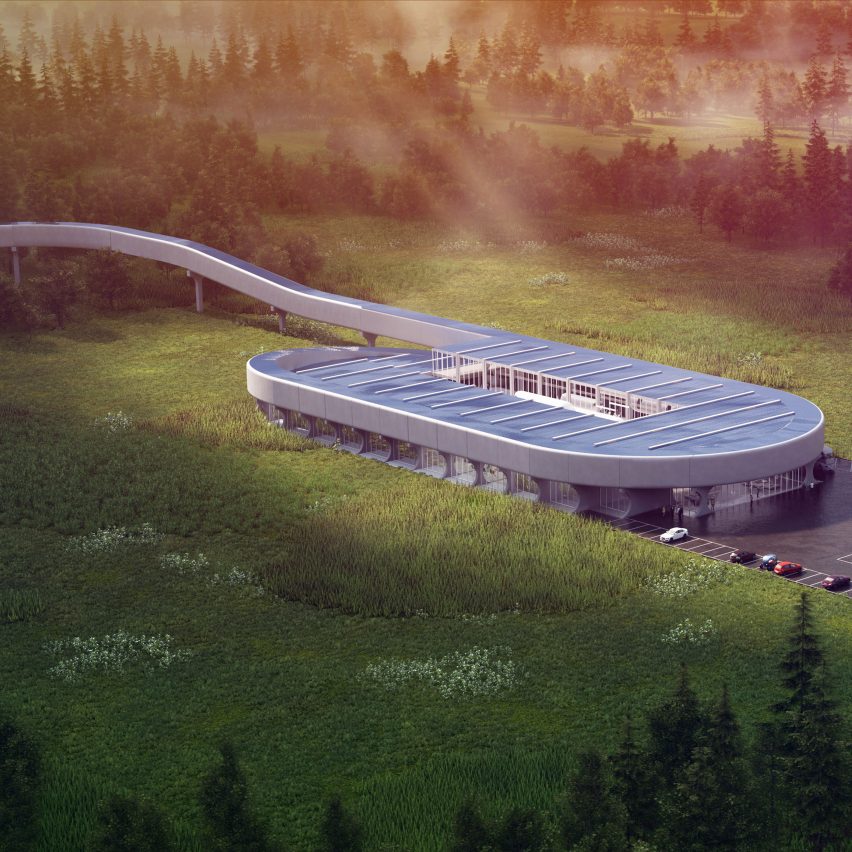 Virgin Hyperloop is building a centre for testing and certifying its high-speed transportation system in West Virginia, designed by architecture firm BIG.

The Hyperloop Certification Center (HCC) facility will include a six-mile-long tube for testing Virgin Hyperloop for mass transportation use. The aim is to achieve safety certification for the new mode of transport – intended to be ultra-fast, with zero direct emissions – by 2025 and for it to be in operation by 2030.

“The Hyperloop Certification Center is the start of the hyperloop journey for West Virginia, for the United States, and for the world,” he added. “We’re one step closer to making hyperloop travel a reality for people everywhere.”

Virgin Hyperloop released visuals of the BIG-designed HCC this month with the announcement that it will be built in Charleston, West Virginia. The state was among 17 states vying for the project following a request for proposals from Virgin Hyperloop.

Renderings show a large, pill-shaped building that extends to the tube, through which the hyperloop pod travels, on one side.

An open-air space is carved into the middle of the building. Here, a hoist is attached to a steel structure that runs along the top, so the pod can be lifted into place in the tube.

Indoor workspaces wrap around the outdoor space in a ring shape, with glazed walls offering views in between them. Large expanses of glass also feature inside, with the motif of curved openings featured throughout.

HCC will be where the company tests and certifies the global safety and industry standards of the system. According to Virgin Hyperloop, it will provide a boost for the industry of West Virginia, with 150-200 engineering and technician jobs, and 13,000 local jobs in construction, manufacturing, operation and maintenance.

Hyperloop was first conceived by Tesla and Space X founder Elon Musk in 2013 as a system of partially depressurised tubes that pods travel through at near-supersonic speeds.

Virgin Hyperloop is among a number of companies vying to develop the technology after Musk open-sourced it. First established as Hyperloop One in 2014, the company was renamed Virgin Hyperloop One when Virgin made a major investment in 2017. The name has since been shortened.

HCC marks the latest advancement in creating a commercial Virgin Hyperloop in the US, which is expected to be 10 times faster than traditional rail.

Earlier this year, the US Department of Transportation (USDOT) Secretary Elaine Chao and the Non-Traditional and Emerging Transportation Technology (NETT) Council created guidance for a regulatory framework for hyperloop in the United States.

BIG, which was founded by Danish architect Bjarke Ingels, and Virgin Hyperloop also revealed videos in 2018 to show how hyperloop passengers will have the illusion they are travelling in a transparent tube.

Virgin Hyperloop has also made advancements outside of the US. Last year, the government of the Indian state of Maharashtra approved plans to develop a high-speed line between Mumbai and Pune, which could become the world’s first hyperloop.

Working with BIG, Virgin also developed the infrastructure design for a Hyperloop in the United Arab Emirates. In 2018, Virgin Hyperloop revealed a prototype design of the pods that will be used on network, which is expected to transport passengers between Dubai and Abu Dhabi in just 12 minutes.