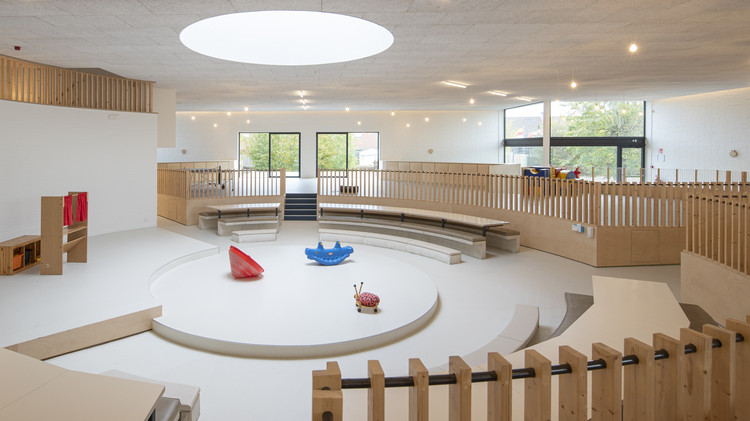 Customization. Because well-defined redevelopment recipes don’t work and therefore, customization is fundamental in heritage conservation, the City of Eeklo organized a competition to ensure that its planned reconversion from the church building to out-of-school childcare runs smoothly. To say the least: ‘a challenge!

Where it used to be quiet in and around the Sint Joseph church, children would now enjoy themselves. The use would shift from the weekend to the week, as well as entail quite a different mobility. Where churchgoers used to wear a thick coat during mass, toddlers in shorts will soon be crawling across the floor.

The architectural spatiality, the child-friendliness, the circular approach, the energetic upgrading, the accessibility, and the double use elevate the project to an exemplary project. We are only “guests”. Because the new function is the result of an acute need that may evolve over time, the previous city architect Filip De Pau considered it irresponsible to permanently change the building through hard, expensive interventions. The competition specifications, therefore, stimulated a reversible intervention. We are only “guests”.

The existing church was characterized by one large rectangular space, without naves. The circular floor plan organized around the altar, with ascending rows of benches and dome crowns, evoked a sacred dimension. The liturgy was celebrated on a central plateau, to which all seats were directed. Many of these elements could be “recovered” and used as an asset. The conversion respects the existing planning organization, around a center, accentuated by a zenithal daylight injection. The first two bank rows are left in function. They unite the children around a storytelling moment or puppet theater.

The visual readability and spatial effect were monitored. High walls, cabinets, or volumes that would crumble or divide the space were avoided. The sloping floor and the concrete benches have also been retained. To create the new living and exercise floors, they were covered with a wooden structure, which can be removed at any time. Circularity at its best!

The apparently no longer usable space between the benches was made laterally accessible by means of shutters and serves as storage space. Among other things, the former bench handrails with bookshelf are preserved there. The design finds a new balance between historical and architectural values ​​on the one hand and new needs on the other.

Functional. More than ever before, children need a warm nest, a place of rest, but also a place that invites action, exploration, and the development of personal competencies. Because classic, high, free-standing wall cabinets were difficult to reconcile with the architecture and the required handrail was worked out along the circular hallway as a back-to-back cabinet; accessible on the one hand from the hallway and corners, on the other hand from the living and exercise floors. The dual function of the cabinet and handrail made it possible to save on material. The result looks fresh and contemporary. It illustrates the power of conversion. The secondary rooms (meeting rooms, sacristy,…) have been transformed into study, sleeping, or craft space. Wide sloping surfaces have been constructed based on accessibility for everyone (wheelchair use, but also parents with a buggy).

Technical. Due to the fact that in historical buildings the reduction of the needs related to the building from a technical point of view (insulation, type of glazing/joinery, etc.) cannot be continued as far as in new construction, the other options had to be dealt with all the more efficiently (compartmentalisation, installation-related demand reduction, efficient generation of heat, …). Moreover, it was necessary to deal with the fact that the conversion of the church to out-of-school childcare also entailed other (standard) requirements. This includes, among other things, increased comfort temperatures, ventilation rates, and lux levels. Realizing that even the new installations would sustain a shorter life than the building itself, special attention was paid to the possibilities for maintenance, repair, replacement, or disposal. In respect of the heritage, this must be possible without consequential damage.

The large space of the central church has no load-bearing dividing walls neither columns. Metal roofbeams make the span. Due to an underlying ceiling, these were not visible from the church. During the reconversion, the existing plenum was used for the ventilation ducts. Given the technical impracticability of underfloor heating and the heritage incompatibility of radiators, these channels are also responsible for the heat supply. Thanks to the BaOpt adjustment, there are no annoying directional, but diffuse soft airflows.

Given the high thermal inertia of the construction, the large air volume, and the measured amount of windows facing south, overheating is not a risk. As a new fire-resistant ceiling had to be installed for safety reasons, as result the acoustics were suddenly improved and the lighting was also addressed.

Sustainable. The city of Eeklo confirmed to the Covenant of Mayors and promised to emit 40% fewer greenhouse gases by 2030. The competition specifications tightened that goal for another 10 years. The thermal insulation of the heritage was approached as an interdisciplinary statement in which cultural values, building physics, historical materials, and constructions had to operate in conjunction. The exterior walls were insulated, the roof was given a warm cap and the exterior joinery was replaced by a high-quality thermal version.

The building was given a “relighting”, balanced ventilation with heat recovery and BaOpt control, a heat pump heating and a PV installation for renewable energy production. In function of higher sanitary consumption, additional rainwater collection and recovery were provided. Partly due to a circular philosophy, the use of materials was limited. The building looks carefully at its new future. The use is locally orientated, which encourages gentle mobility. A participation process was coordinated with the stakeholders. Double use of the spaces is already on the agenda.