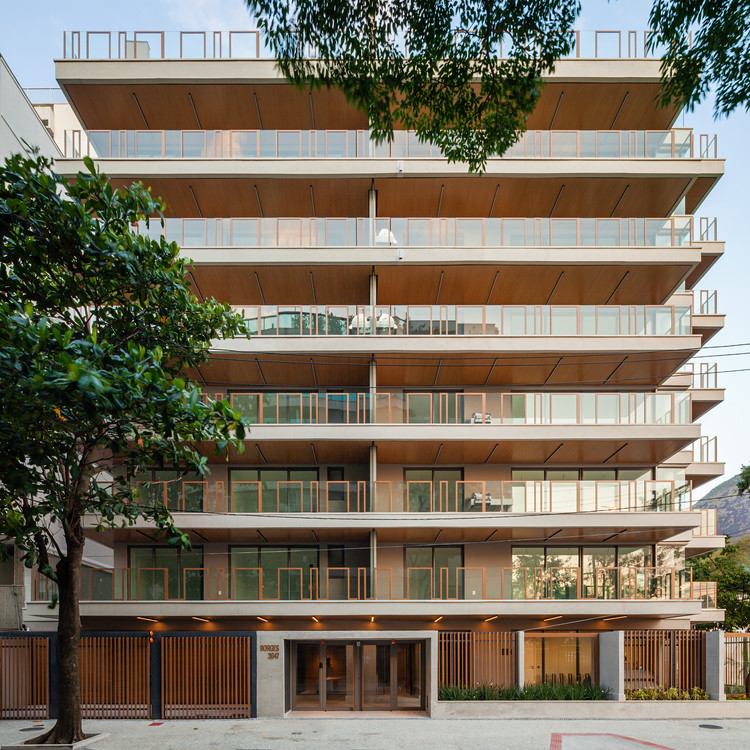 Text description provided by the architects. With its memorable lines that run along the entire façade, the Borges Building project, located at Rodrigo de Freitas Lagoon, was designed to enhance and connect with this remarkable landscape of the city of Rio de Janeiro.

Cité Arquitetura created a powerful pattern of lines that permeate the entire façade. According to Waltércio Caldas, “Drawings are mostly paper objects and some believe that drawing is the fastest process of art. But art depends a lot on this ‘nearly nothing’ and drawings remain as smiles, unsuspectingly going towards oblivion”.

The lines that form a design are embedded in the meaning of a project. We used this idea to build the concept: a series of lines along the entire façade, creating volumetric matrices and finishing details.

To ensure a perfect view of the lake and the large tree canopies on the street, the project features wide spans, resulting in a strong visual connection with the surrounding landscape. The first layer that forms this façade is composed of concrete and perforated metal panels. The second layer, the balconies, is composed of wood slats in an asymmetrical and varying pattern.

The building has six floors and two units per floor, one with three bedrooms and the other with two bedrooms. The position of the bathrooms and kitchens allows for a floor plan with a maximum number of layout variations. There are three different floor plan variations in this proposal, including the possibility of adapting to a floor-through unit quickly and efficiently. This flexibility allows dwellers to adapt the house according to their preferences and needs.

This project, along with the Carmela Dutra and Lygia Reisen building, is part of the Cité Design 360, a program in which Cité Arquitetura actively participates in all stages of the design, from viability studies to the creation of a name for the development, as well as advertising material and construction drawings.