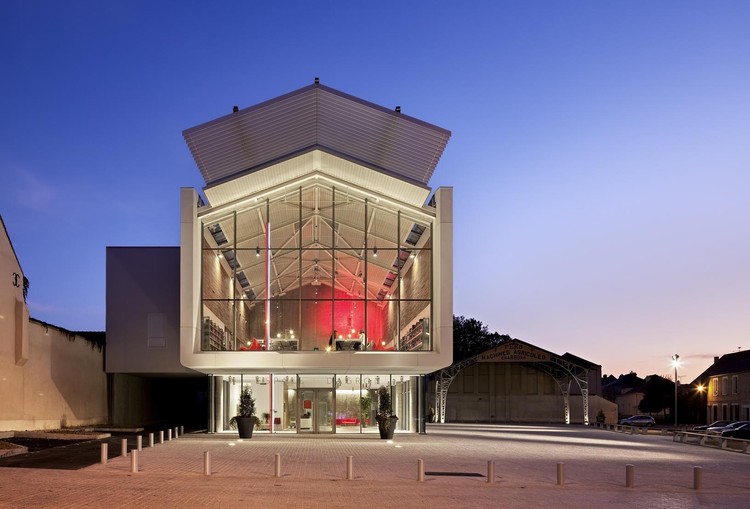 Designers have created civic institutions, governmental centers, public plazas, and many other spaces as testaments to individual and shared values. As spaces for gathering and exchange are necessary elements to urban life, architecture can also act as a vehicle to encourage understanding. Advocating knowledge while empowering the public, libraries celebrate ideas, curiosity and empathy.

France has built many new libraries across the country, buildings that embrace new technology, media, and collection formats. Combining mixed programs and civic amenities, contemporary libraries are rapidly evolving to meet modern demands and anticipate future trends. Libraries are one means by which architects and designers can make space for learning and foster cultural exchange, creating room for education and new ideas. The following work takes a closer look at libraries across France, building upon iconic examples like the National Library of France to ground new ideas on how shared values are discovered, reimagined and expressed.

The town of Pélissanne is an ancient fortified city located in the heart of Provence in France. The new media library takes place in the historic Maureau Mansion, built in 1642 and set in the heart of an urban garden. The building is thus part of a rich landscape and heritage context. The project contrasts the verticality of the rehabilitated volume of the existing building and the horizontality of the extension.

The media library in Colombes, near Paris, is part of a new Social Center whose purpose on a broader scale is the urban renewal and upgrading of the town’s Fossés Jean/Bouviers district. To strengthen the unique characteristics of this site, the volume is open to the city, detached from the ground, and creates transparency and a deep view into the edifice from the place Michelet all the way to the gardens of the Social Center.

The construction of the new multimedia library of Montauban spearheaded an urban renewal project in the eastern quarters of the city. It needed to mark the entrance to the city, providing an identity to these neglected neighborhoods while still representing the city of Montauban. In parallel, it is a project of reinvention: in the digitalization of knowledge, the challenges of such a design are of space and of materialization of the information and its division.

The project is located in the rural landscapes of southern France, in a city called Monein. The building takes place on the main square near the town hall. The idea was to create an architectural intervention that established a flagship role in the city. The team’s strategy when designing this building was to use and preserve the urban and architectural context to create a contemporary architecture in dialogue with its historical environment.

The site is marked by the presence of the campus facing the town through the intermediary of the new library. Located at the edge of the campus, the new building curls around the old library to create a dynamic that heralds the development and renewal of the library and a harbinger of the future evolution of the campus.

This project had the ambition of becoming a new model for media libraries. The programme calls the functions of a media library into question, lending it the content of a ‘third place’ – a place where members of the public become actors in their own condition, a place for creation as well as reception. In association with the basic programme, the building includes areas for displays, creation, music studios, and a café-restaurant.

Bibliothèque Alexis de Tocqueville is a public library for the metropolitan region Caen la Mer in Normandy, France. The 12,000 m2 multimedia library is located at the tip of the peninsula that extends out from the city of Caen to the English Channel. Its key position – between the city’s historic core and an area of Caen that is being developed – supports the city’s ambition for the library to become a new civic center.

Located in the inner city of Grenay (Pas-de-Calais, France), this media library offers the municipality with a cultural equipment designed to answer the need of population. The project is located at a triangular crossroad between three old mining conglomerations which used to constitute the town. The immediate urban fabric is mainly composed of pavilions and it was essential to the contractor that this location become the center of Grenay.

The Media Library is a strong cultural symbol for the Marsan urban area. The Media Library stands in the middle of the Bosquet barracks, and care has been taken to augment the dialogue with the place’s strong architectural whole. With its clean envelope of pure geometric lines, the building complies with the classical layout yet contrasts with its austerity by offsetting the system with a corner opening onto the city.

Inspired by the nearby covered market, the project designed by the Patrick Mauger agency in Auneau takes the form of a contemporary hall. The building is set back from the street, creating an esplanade that extends the main market square. A friendly, diversified space combining cultural activities and community life has been created. Like a figurehead, a multimedia library stretches out on the 1st floor.