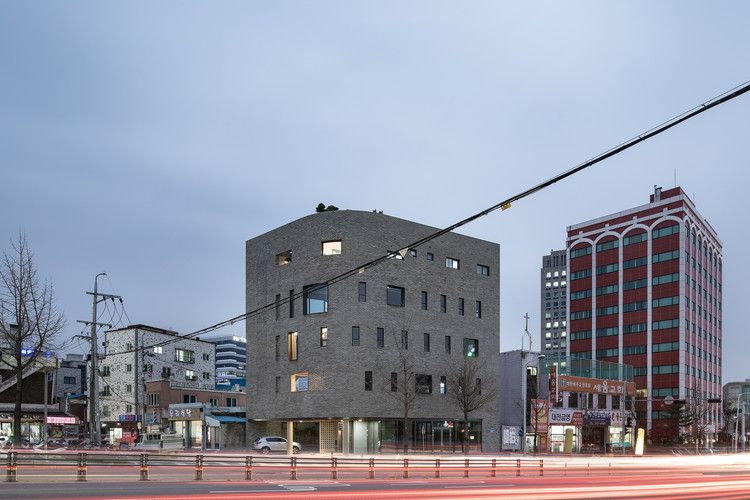 Text description provided by the architects. The first strategy was to construct a building that is small, since it is located on the roadside, yet has a presence. For this, we set the side facing the road not to be the mass but the urban wall reacting to the city. The second was to break from the general simple core structure of a commercial building and create an open type of circulation path, where the characteristics of the building users are shown, and the exchange between each other is possible.

The third was the reflection of the design of doors and windows that mirrored the characteristics of the surrounding scenery viewed from the site, excluding the open windows of the curtain wall type which is unconsciously applied to boost the effect of the commercials. This brought with The building was designed with these three strategies. The building forms an URBAN WALL of a primary boundary in a rounded form following the shape of the site. This URBAN WALL is what differentiates the frontal road of the site from the city block at the back of the site, and this brick wall of heavy texture seen from the street responds to the city in a closed manner.

On the other hand, the exterior stairs, corridors, entrance hall and each required space treated with Stucco were adhered to the URBAN WALL in an opened form at the back side of the building and processed to be visually connected to the established existing city block without being heterogeneous.

An exposed form of exterior staircase was installed, which wraps around and ascends the rear inner court from the first to fifth floors, shedding the usual closed form of core of a commercial building. The exterior staircase of this building is the most important design requisite, people can easily approach the stairs from the frontal road on the ground layer, and with it, they are naturally connected to the front entrance of each of the upper floors without a lobby space, and all views are open towards the exterior.

This place will be filled with people who pass by, stay, see and talk, and it will become a spacethat includes the most mundane lives. The windows, each of different sizes and shapes, were reflected by analyzing the attributes of the surrounding sceneries, and they were uniquely arranged considering the landscapes of the distant and near views of the city overlooked from the inside. This was in hopes of having the users ruminate on the values of everyday life that they fee by making the values of the city, which change with seasons and time, be seen through a frame of borrowed scenery.

Over time, depending on the lifestyle of the user, the frames of these doors and windows will be filled with curtains, blinds, lightings or advertising phrases, etc., with each different personality, and the meaning of the building seen from the outside will continue to change.