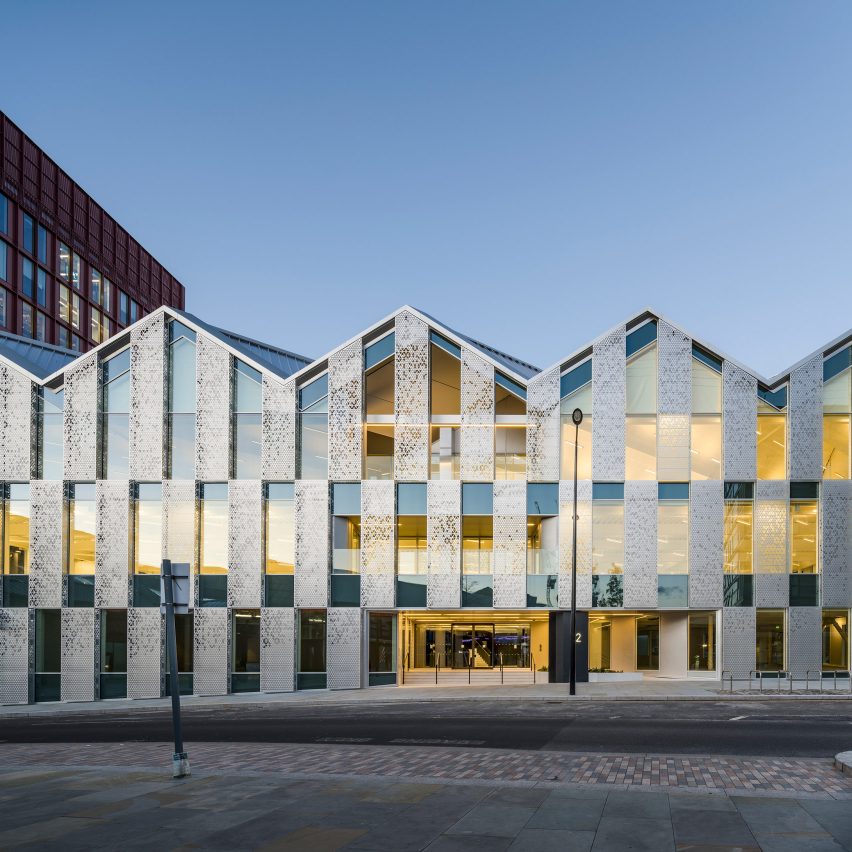 UK studio Coffey Architects has created an office block at 22 Handyside Street that aims to recreate the feel of the former industrial spaces in King’s Cross, London.

Built as part of the development of the King’s Cross area of London, the office block completes a row of buildings that contains the pink R7 building designed by Morris + Company and Fumihiko Maki’s Aga Khan Centre.

Coffey Architects derived the form of the three-storey office block from the grade II-listed mainline and underground railway tunnels that lead to the nearby station, which the building stands directly above.

The structural grid, combined with a desire to allow daylight into the building, lead the studio to align the building diagonally with a series of pitched roofs running between the two streets on the corner site.

These pitched roofs create distinctive rooflines on the block’s two street-facing facades and help mark the office as a landmark building at the edge of the King’s Cross development.

“At three stories you recognise that the roof can play a part,” explained Coffey Architects founder Phil Coffey.

“It’s not purely decoration, it is literally driven by the direction of the tunnels, which combined with the grid form the roofline,” he told Dezeen.

“That drives the elevation, which then offers two fronts one to York Way and one to Handyside Street. It also creates a corner, which acts as a gateway to King’s Cross.

The form also recalls the industrial sheds that would have previously been on the site and aims to be a playful addition to King’s Cross.

By recalling this found, industrial architecture Coffey hopes that the building will appeal to technology, media and telecommunications (TMT) tenants.

“Those found spaces, industrial spaces are what the TMT tenants are after,” he continued. “So how can you make a new building that has that kind of sensibility?”

On the upper floor, this found aesthetic is most visible as the ceilings follow the form of the diagonal, pitched roofs above to create a space which rises to 6.7 metres high.

Described by the studio as a “gallery-like space” this open-plan office space is broken up by the structural steel columns.

“We thought it’d be nice to have something that’s informal on the top floor, that feels comfortable for those kinds of tenants,” explained Coffey.

Below this upper storey is a second office floor, while the ground floor contains the building’s reception, cafe and further offices.

The entire structure is wrapped in embossed and perforated anodised aluminium panels, which aim to enliven the building’s facades and create a dappled interesting light effect inside that changes throughout the day.

“We wanted something that lightened the whole building, in terms of actual brightness and reflection, and also something that accepts the light and creates shadows inside the building,” explained Coffey.

“I really believe that if you make a building where there’s wit about light, if there are shadows and dappled movements during the day, then you’re conscious of your environment and you will care more for it and for yourself.”

Overall Coffey hopes that the building will be an enjoyable marker of one of the entrances to the development.

“It’s super important because it’s a gateway building and the client wanted something that’s kind of different and a little bit fun,” said Coffey. “I think that’s what we gave them. In essence, it’s designed with a smile.”

22 Handyside Street is the latest building to complete as part of the development of King’s Cross in central London.

Photography is by Tim Soar unless stated.