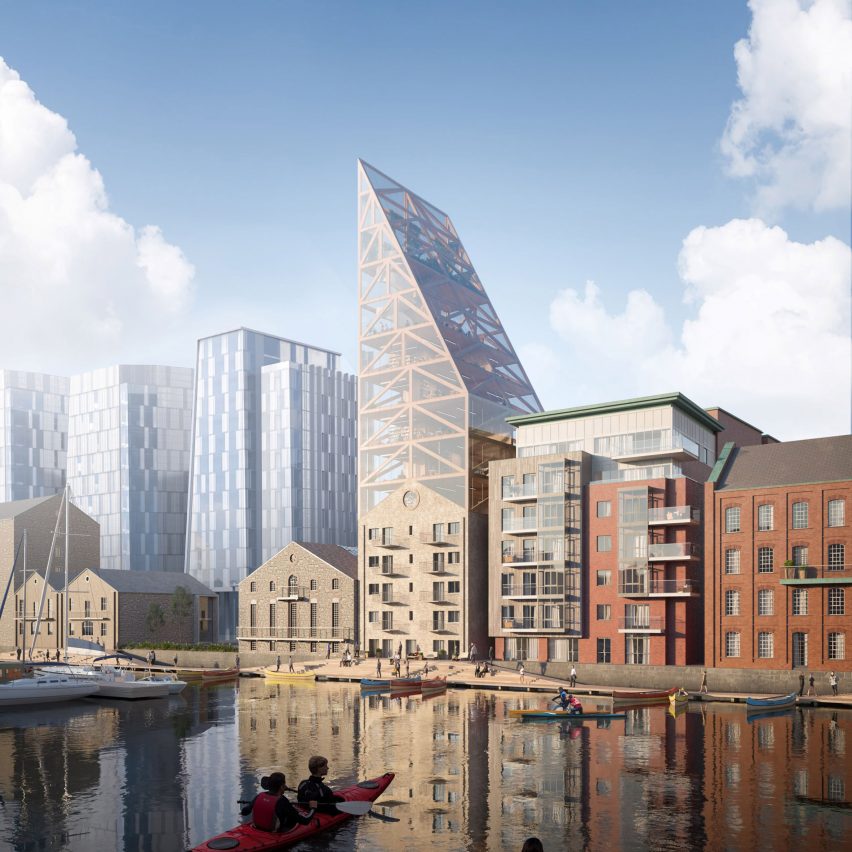 Architecture studio Urban Agency is extending an existing mill building in Dublin, Ireland, to create the 50-metres-high Dock Mill, which will be one of the tallest timber buildings in Europe.

The thirteen-storey building was commissioned by property development company Lioncor.

“The brief was to design a state of the art sustainable and flexible building in the Dublin ‘Silicon Quarter’,” Urban Agency co-founder Maxime Laroussi told Dezeen.

To fulfil the sustainability criteria, Urban Agency chose to work with cross-laminated timber (CLT), which will suit the restrictions of the site and help with time efficiency.

Dock Mill’s existing facade and the floor plates of the industrial mill will be maintained and restored. A sustainably-sourced timber extension will then be added.

“The roof is to be removed and the localised CLT columns are to be inserted in the four corners of the existing floor plate all the way to the ground floor,” Laroussi said.

“From ground floor to basement level those columns are to seat on underpinned concrete perimeter walls.”

The building will house office spaces in the new timber tower, while the existing mill will be home to apartments. Its double-height top storey will have a winter garden with tall trees and plants.

A double-skin glass facade is designed to wrap the timber structure of the new extension, which the studio envisions as a “modern take on the glasshouse”.

“One key design element is the creation of a new floating pedestrian public streetscape in the form of a series of undulating boardwalks and wide amphitheatre-like stepping plazas,” Laroussi said.

“This, to connect all the buildings fronting Grand Canal Docks and give waterfront access to the public while creating a shortcut to the train station on the opposite side.”

“The biggest challenge is always local regulation which varies from one country to another and even from a state or province to another, like in the US and Canada.”

Urban Agency has offices in Dublin, Copenhagen, Lyon and Düsseldorf and recently designed the Lille Langebro bicycle bridge in Copenhagen together with WilkinsoEyre.

The post Dock Mill by Urban Agency set to be one of Europe's tallest timber buildings appeared first on Dezeen.