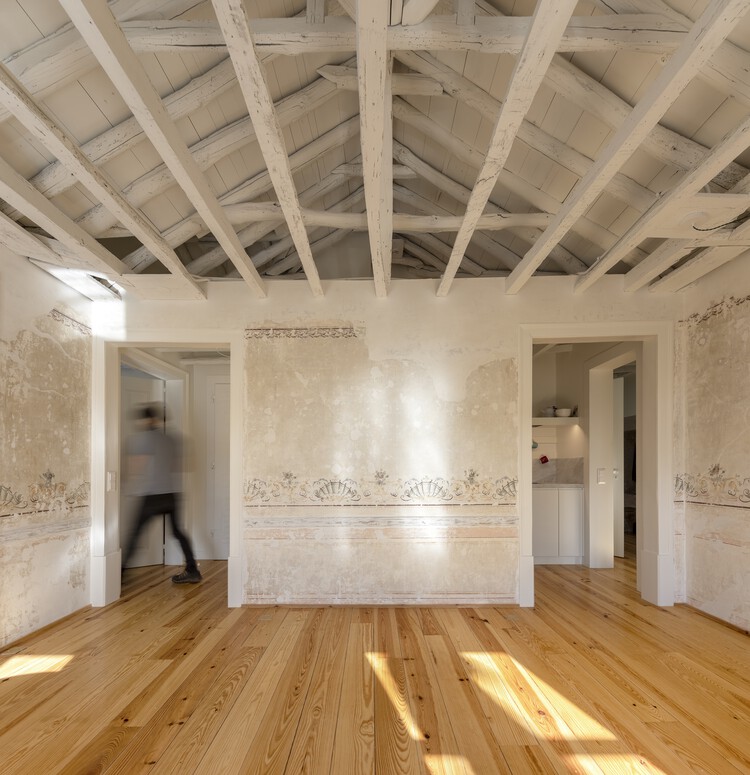 Text description provided by the architects. The building was constructed in the first quarter of the 19th century, at the heart of Lisbon’s Baixa Pombalina district.

By 2016, the building was almost completely vacant and severely dilapidated. The structure of the building had been greatly weakened by the demolition of resistant walls at ground level, which had led to the floors settling.

To make the most of the corner location of the building, it was proposed to change the configuration from two apartments to three per floor, maintaining the original Pombaline layout, with an intricately arrange series of spaces. To address modern demands for comfort and accessibility, a lift was installed at the centre of the building, leaving the original stairwell intact.

The first phase of construction began in 2017, with the aim of correcting the building’s structural shortcomings, repairing the roof, and renovating the ground floor. Structural surveys were carried out between the two phases, along with surveys on the walls and ceilings.

Examination of the wall paintings revealed the existence of successive layers of frescoes and tempera paintings in all the apartments. At that point, it was thought vital to uncover the frescoes, which languished unseen beneath newer layers of painting for decades. Preserving them was deemed one of the most important concerns of the whole project. The strategy was adjusted to prevent any scraping against the walls, new solutions for installing the building infrastructure were executed.

Subsequently, however, the decision was made not to proceed with the restoration of the frescoes, nor to prioritise specific features. Instead, the consensus was that these traces of the past should be left as they are, overlapping, incomplete, with all their flaws. We endeavoured to reveal the sheer complexity of the building by revealing the multitude of transformations that it has undergone over time.