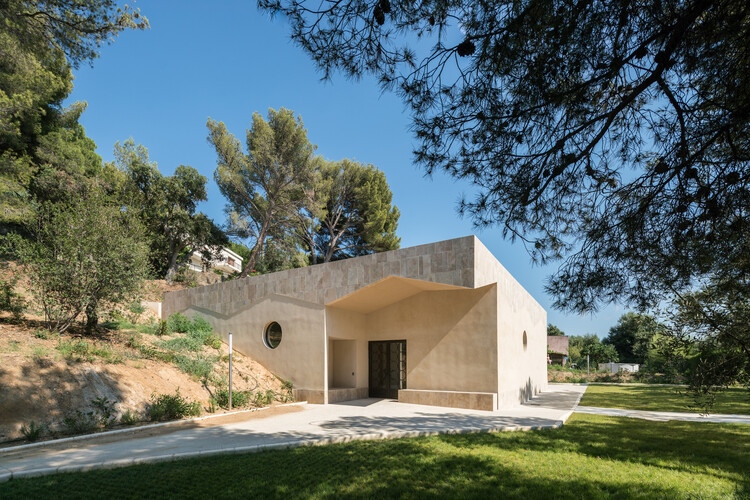 The plot is situated in a residential neighbourhood near the old centre of “Bormes Les Mimosas”. Our aim is to create a building in a familiar environment, without being ostentatious. We wish to create a volume as dense as possible to optimize the square footage and minimize its impact on the site. Built in the hill, it provides generous space around it, allowing for a forecourt and all parking spaces necessary to the project. This building, with a simple volumetry, welcomes abstraction. It is inspired by architecture from the area and will provide its users the comfort of being in familiar surroundings which they will easily make theirs. We shall proceed from the inside to the outside, keeping the façades bare to contrast with the complexity and the spatial richness of the interior.

The façades are blind walls, opened purely for lighting purposes. They express discretion and are a testament to the simplicity which integrates them to the area with fluidity. From the hall, the family lounges have independent accesses which allow privacy. Opened on the patio, they are sheltered from outside nuisances but at the same time prevent from feeling confined which could be trying at a time of bereavement.

The light has been studied to be indirect, punctual, and softened to allow grieving without being observed. The dim light enriches the relationship between the deceased and his family, the solicitation of the senses is therefore discreet to the point of reducing the angles of the room, providing an ambiance favourable to meditation.

A large door links the Chapel of Rest to the technical zone where the bodies are prepared. It is paramount to treat this zone with the utmost care in order to optimize the preservation and preparation of the bodies. For obvious reasons of discretion, the arrival of the vehicles is planned at the rear, allowing handling to be done out of sight.

The project uses the codes of funerary architecture: minimalism, monumentality, light, shade… with the aim to create a calm and lasting architecture.