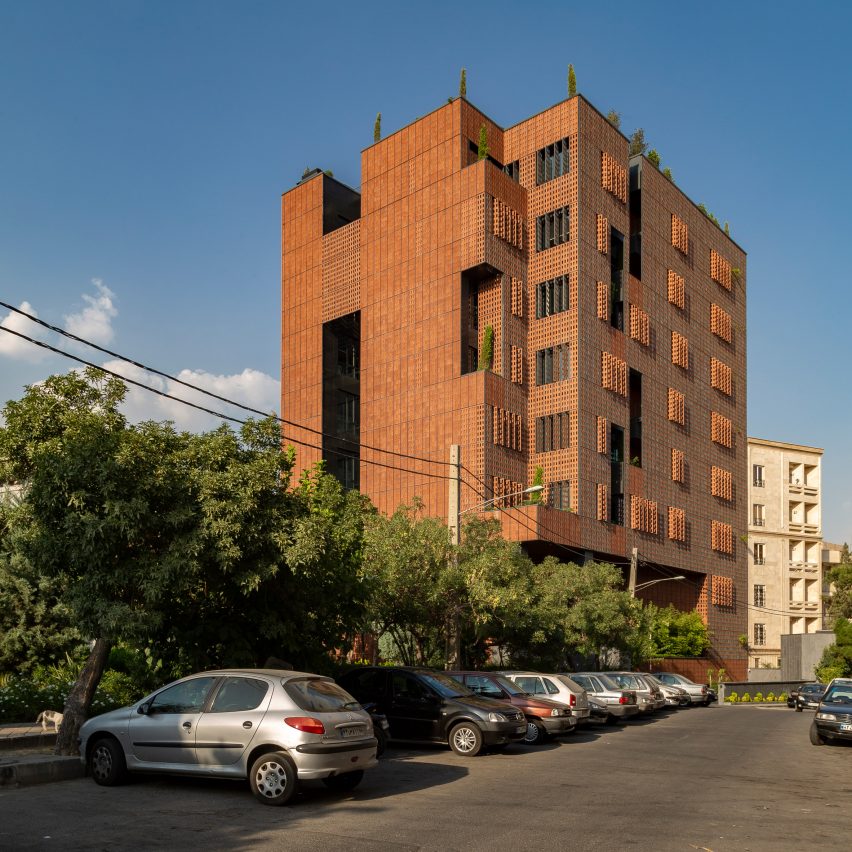 Local architecture studio Hooba Design Group has completed an office building for the Sharif University of Technology in Tehran, Iran, which features a smart brick facade that adapts to different times of the day.

The Sharif Office Building was designed as a communal workspace for the Sharif Innovation Zone next to the university. It was built on top of an existing concrete structure that forms the ground floor of the building.

This was expanded and completed with modifications based on Hooba Design Group’s new design, which features specially-made smart-brick panels that adjust according to the sunlight.

To create the facade Hooba Design Group designed a brick that took its cue from the 1940s-style bricks that clad the nearby university buildings. The studio’s version is larger, with a cut-out in the middle that is the same dimension as the traditional bricks.

“The hole in this brick gives a semi-transparent character to the solid block.”

These bricks, which were manufactured by Azarakhsh Bricks exclusively for the project, are set on panels equipped with light sensors that adjust according to the sunlight throughout the day.

“They adjust based on lighting patterns and the required light exposure in the interior spaces,” Balazadeh explained.

“Sensors are programmable based on two different scenarios and are set up based on user preferences in each floor.”

Designing the facade from brick but using new technology was a nod to the nearby 1960s brick-clad university buildings, as well as the fact that the Sharif Office Building will house students working on technological innovations.

The 7,200 square-metres building (77,500 square feet) will house the Bon Tech Institute, which was initiated by the Sharif University of Technology as a research-based communal working space for students.

“The aim of this group was to provide the students with adequate facilities for research and investigation and to reduce the huge amount of brain drain from the country,” Balazadeh explained.

Sharif Office Building will have offices as well as common spaces, including a meeting space and a cafeteria which will be connected to the outdoors and the university commons. Inside, the offices are open and semi-open, separated by interior green spaces.

Its design also took the surrounding environment into consideration,

“The double skin used in this project helps to control the sun heat exposure in the climate of Tehran and eventually reduces energy consumption during the hot season,” Balazadeh said.

Hooba Design Group also designed a new type of brick for an earlier project, the headquarters of brick manufacturer Kohan Ceram, while its design for the Aptus concrete factory had an all-concrete envelope.

Photography is by Parham Taghioff unless otherwise stated.