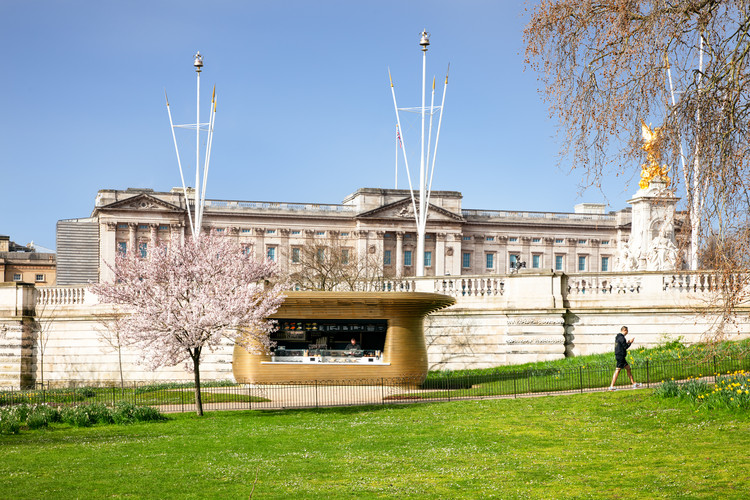 Text description provided by the architects. Characterising the largest mobilisation The Royal Parks has seen in 14 years. The high-profile commission included the delivery of a coffee house near the Serpentine lake, as well as nine “handcrafted” kiosks to replace aging food kiosks on existing sites across Hyde Park, Green Park and St James’s Park. The most recently erected structure, the flagship Horseshoe Bend kiosk in St James’s Park, is clad in tubular brass and mirrors the ornate precious metals of the nearby Sir Thomas Brock’s Queen Victoria Memorial.

Responding to the Grade I listed landscape, Mizzi Studio has designed each kiosk to sit sympathetically in its environment. The freestanding kiosks are conceived as a family of individual curvaceous structures with a graceful tree-like canopy that unites their design language. The initial eight kiosks are clad in hand “steam-bent” English oak timber, developed in collaboration with British designer and maker Tom Raffield.

In context: Horseshoe Bend Kiosk and The Royal Parks Family Fleet.  The kiosks’ 360-degree sculptural canopy swells outwards like a tree’s crown, creating recognisable silhouettes. The organic- inspired volumes follow a continuous shape with varying degrees of curvature and differing cladding profiles, each providing contrasting textures. Each design variation is informed by the architectural or organic elements that the kiosk shares its space with. Together with Colicci’s Director Rob Colicci, Jonathan Mizzi, Director of Mizzi Studio,  spent months exploring the parks’ heritage. Each kiosk is unique, tailored to the history, nuances, and demographics of its respective site.

The materiality of the Horseshoe Bend kiosk marries with Mizzi Studio’s Serpentine Coffee House, sited metres away from Zaha Hadid’s Serpentine Sackler Gallery, with views towards the picturesque Serpentine Lake in one direction and the Princess Diana Memorial Fountain in the other. The coffee house is swooping and sinuous, inspired by both the lake itself and the motion of a stingray’s flight. Its sculptural brass roof gives the appearance of a giant golden cape being pulled through the air over the entire structure, bringing movement and texture to the verdant landscape in which it sits.

Mizzi Studio has collaborated with Colicci on a number of projects over the years, including the multi award-winning copper café at London’s Westfield Stratford shopping centre and The Pheasantry Café within Grade I Listed Bushy Park. Their joint body of work has had a strong focus on craftsmanship, a connection with nature, and creating memorable sculptural moments.