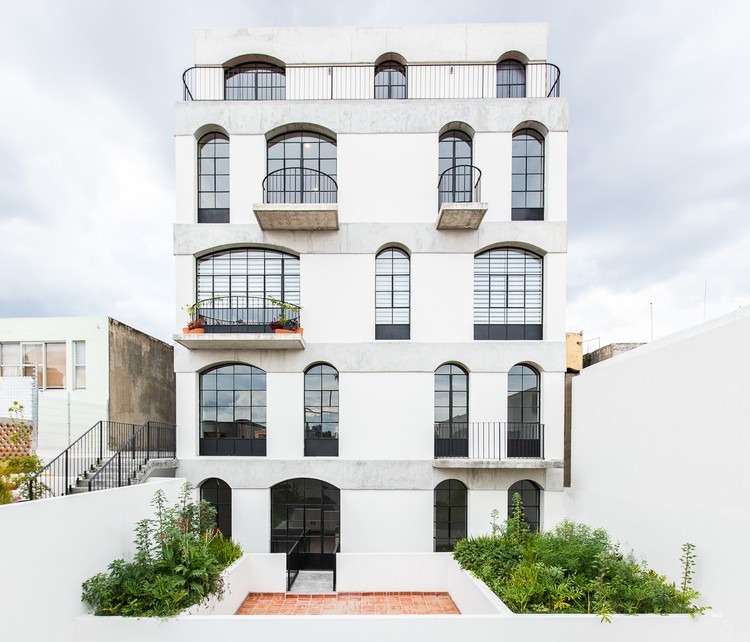 Text description provided by the architects. Located within one of the best-kept blocks of Guadalajara’s Centro and Americana neighborhoods, CB is a project that merges a heritage building and a new, mixed-use development, promoting the reactivation and densification of the city’s central areas. The heritage house was in a bad state before the intervention, so the project centered its’ aim on saving the original layout and removing the walls and spaces added throughout the years.

The totality of the original home’s configuration was respected in the redesign; the facade’s ornaments were restored, the central patio was rescued, and the main patio-facing hallway was used to add commercial lots to the street level, placed within the heritage building without damaging any preexisting elements. In the back area — which wasn’t part of the original building and had come to be used as storage space — the annex tops off at five stories, imperceptible from street level. The project includes parking space on the ground floor and 10 residential units, eight of which feature two bedrooms, and two which function as open-plan studios.

Among the intervention’s characteristic elements are its thick walls, which allow for shelving that maximizes the apartments’ storage space and reference the density of the heritage building’s adobe partitions. The rooftop functions as a shared-use space with plants, a grill, tables, and bathrooms. The new building’s facades feature windows and arches that emulate the ones of the heritage building, establishing a respectful and subtle dialogue between the old and the contemporary.