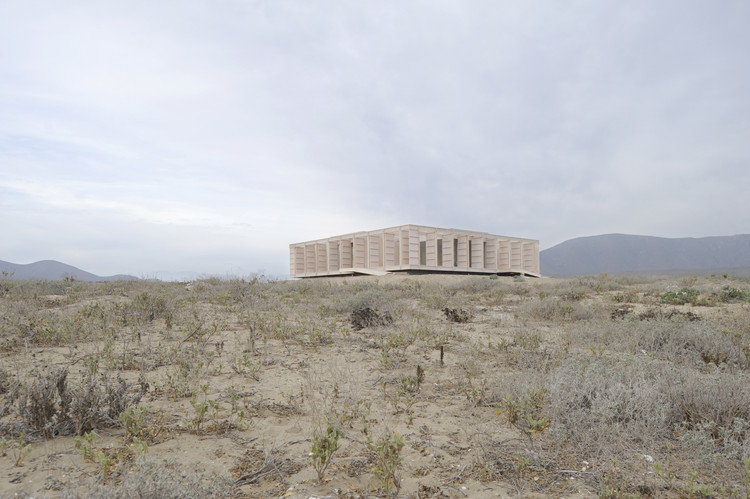 Text description provided by the architects. This project is by a long, open beach, on a desert dune rising in front of a wetland. It is a seasonal house to accommodate up to three couples and can be leased or bartered for the rest of the year. Its intermittent occupation and isolated location led us to think of it as a superposition of two models: the motel and the cabin. The motel suggests self-sufficient rooms served from the outside by second access, while the cabin presumes a centralized space that brings the community together. A set of 4 rooms come together in a shared central kitchen, forming a larger compact structure enclosed by mobile panels, which open different possibilities of use according to their position.

Each room consists of an interior space connected to an equivalent-sized courtyard, both covered by a common beamed ceiling, with two sides open to the outside and a wall separating them from the adjoining unit. These four structures are placed together in a perpendicular axis from one another, conforming to a cross plan over a squared base. The tip of this form, which faces the horizon, hosts a living room connected to a kitchen and dining room in one common area. The opposite end contains a guest room with views of the wetland. On either side, two units host equal master bedrooms-courtyard facing the peninsulas located at both ends of the beach.

The construction is entirely conceived in pinewood with glued joints managed without metal pieces exposed to the sea oxide. The beamed ceiling is developed in four separate rectangular structures, settled over the walls and a perimeter porch avoiding diagonal main beams. The rotated disposition of these four structural units leaves a skylight above the central kitchen. By shifting the openings of the exterior structure by half a module from the axis of this skylight, a diagonal view is generated from the kitchen’s center, fostering the perception of the exterior as a moving panorama.

Outside these rows of pillars, 72 wooden doors enclose the house. When opened outward, each room courtyard is a private space connected to the outside by a row of portals framing the horizon. When closed, instead, they become an intimate space, protected from the wind and the views, but opened to its neighbors through a perimeter porch. Opening the views foster independence. Closing some doors can open common uses.