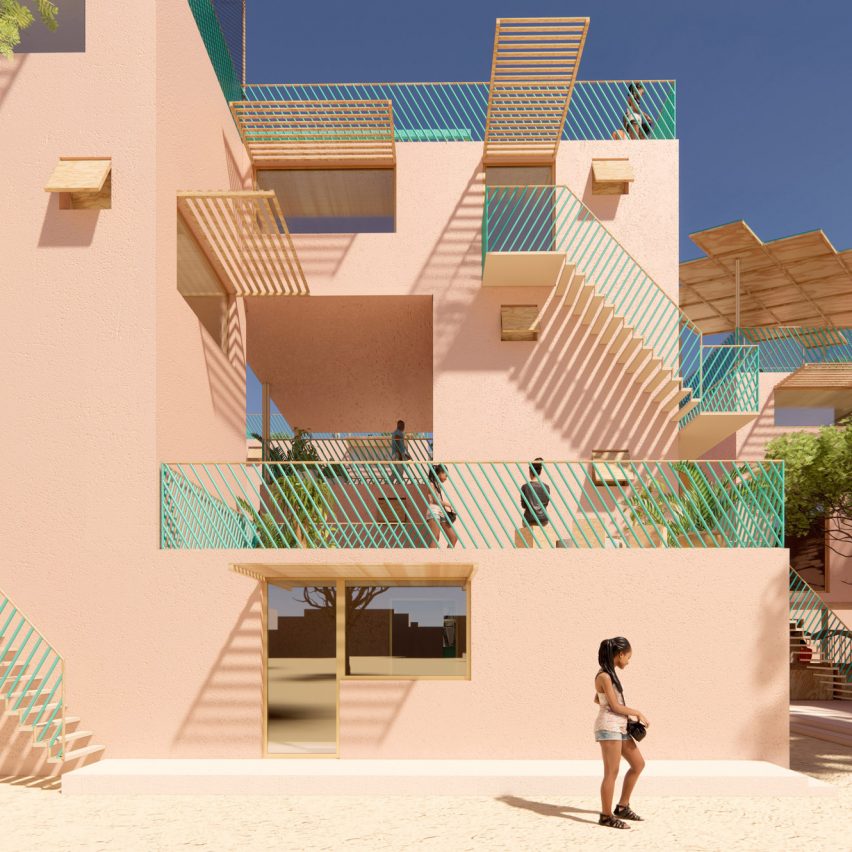 Architect Julien de Smedt is working with Norwegian startup Othalo to create a range of modular houses that will be constructed largely from recycled plastic.

Created by Othalo, in partnership with UN Habitat – the United Nations’ programme for sustainable urban development – the homes are designed to be a low-cost option for sub-Saharan Africa.

Using a patented system each house’s main structure and walls will be made from recycled plastic, with a sixty-square-metres Othalo house incorporating around eight tonnes of plastic waste.

“Both of these two structures can be made of 100 per cent recycled plastics.”

Othalo and De Smedt, who designed the modular elements, envision the homes being constructed from plastic that is collected from near the building sites.

“We believe this is one of the ways to deal with a shortage of building materials in these areas of the world where there is an urgent need for housing,” said De Smedt.

“Just as cities are formed by buildings of wood, of concrete, clay, steel, they could very well contain a building constructed from plastic waste, as long as it’s done in a safe and sustainable way,” he added.

De Smedt said the team plans to host a number of creative collaborations in different locations, in order to create additional elements to supplement the base design and allow for regional adaptation.

For the initial designs, De Smedt looked to fast-growing cities such as Nairobi in Kenya.

“We started analysing the types of buildings people live in, what kind of jobs people have, and how houses are organised,” he said. “We looked at how neighbourhoods get formed, but also how people do business and interact between each other inside the community.”

The early designs for the houses feature a variety of interconnected covered spaces, loggias and terraces that provide sheltered outdoor space and add variety to the houses.

“Parts of this idea comes from the climate that allows outside life but also requires sun shading and ventilation,” De Smedt said.

“A lot of these conditions can be found in lively neighbourhoods around the world. They will serve as more specific references as the project develops in different contexts.”

Othalo expects to start mass-producing the houses in early 2022 and believes that the system will allow the millions of tonnes of plastic waste to become useful building material.

“If you consider the amount of plastic waste worldwide, this could very well become an entirely new material resource to tap onto.”

“With today’s plastic waste, more than one billion houses can be built,” Othalo said.

It also aims to eventually expand its product line into temperature-controlled mobile storage units for food and medicine, as well as refugee shelters and larger modular buildings such as schools and hospitals.

“It became clear that the scope should expand beyond establishing living typologies,” De Smedt told Dezeen.

“It would need to integrate and enable local crafts and cultures and ultimately aim at the creation of diverse neighbourhoods rather than merely piling up individual units,” he continued.

“In a way the system is as much an enabler of urban conditions – the public spaces – as it is allowing volumes to interact – the buildings.”