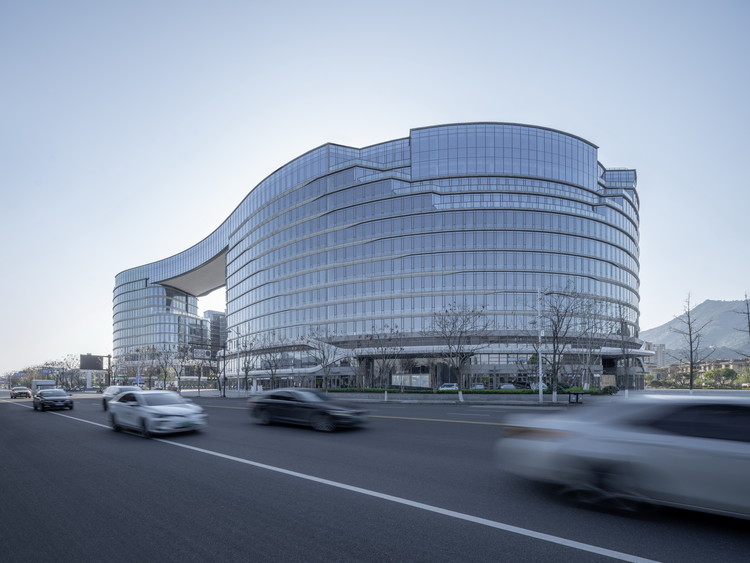 Text description provided by the architects. The site of Lushan Times was launched in 2012 and was decided to be a complex with city-level capacity. It is the climax of GOA’s practices in this district, and also an important link in the construction of the new city. The site has a superior location, with Lushan Mountain at the back and a commanding view of the Fuchun River. On one side of the site is Changqiao Bridge, and on the other side is the cultural highland of the new city represented by the “Three Museums in One” of Fuyang (Wang Shu’s work). From a certain point of view, the building will be the only visible artifact in this landscape. It will represent the urban civilization in a certain attitude, and be integrated into this landscape scroll.

The relationship between seeing and being seen is considered first. On the one hand, the architectural image seen from the opposite bank and the bridge needs to be conceived; on the other hand, the value of the river view seen from the inside of the building should be fully satisfied. After thinking about this relationship, the architects drew an initial sketch: the building is arranged along the periphery, forming a square inside to accommodate citizen activities, while creating a relatively complete image outside. Extended from this idea, the final complex is a double-ring structure, with an inward circular square nested in the outer curved triangular contour, a number of side-opened spaces with different atmospheres outlined between the two rings, and several strips of high-rise volumes extending and connected on the outer base.

The sea is broad, while the river is narrow and long. As far as the river view is concerned, its winding trend makes the view from a variety of angles a unique experience. Under this law, the strategy of integration at the periphery not only ensures the purity of the image but also realizes the maximization and diversification of the river view. In the process of deepening the building shape, the team has kept deliberating with the spatial line of sight in each direction as the standard, and finally achieved both the formal beauty and the line of sight value.

“Being used” Public vitality beyond commercial goals. Creating a truly vibrant urban public space is a core issue in the construction of the new city. High-quality public space can provide a carrier for people’s non-spontaneous activities, so as to truly stimulate the vitality of urban life. This is especially true for Lushan New Area in Fuyang, where public space is still lacking. As the first urban complex of the new city, Lushan Times and its adjacent “Three Museums in One”, as the cultural center of the new city, naturally constitute the “heartland” of the new city’s citizen activities and play an important role in shaping the public space of the new city. Therefore, the architects proposed the idea of “New City Reception Hall”, focusing on strengthening the “convergence effect” of space, so that the limited building volume and the content of public activities can play a more significant contribution at the city level.

The commercial section in the lower part is designed in a layered stereoscopic outdoor terrace, gradually bringing the ground value to the top. It also creates views of the river from multiple elevations, so that the view changes as you walk. The boundary line on the side facing the river recedes to form a concave city square, while the northeast corner facing the cultural cluster of “Three Museums in One” is treated with a receding platform to create a friendlier boundary.

The 60-meter-long voids open a window for the apartments at the back to view the river and guide the flow of people in the commercial section. The hotel lobby in the void corridor becomes a viewing destination with its ultimate river view experience. The value exploration of functional spaces in the upper and lower parts helps the complex form “real vitality” under the function synergy.

Response to regional characteristics, the approachable scale of large buildings. For large comprehensive buildings, there is often a huge gap between the macro conception and the proper building construction that needs to be addressed by specific strategies. To create a pure, full, and complete form, reasonable strategies are needed to resolve the sense of pressure from large buildings. The architects looked back at the relationship between “seeing” and “being seen” and further described the image of the building from the perspectives of the bridge and the opposite bank. The final façade uses transverse lines of different widths to build the rhythm of the curved surface. When viewed from different distances, the horizontal aluminum alloy components with radians on the curved surface reflect the bright and dark divisions under the light, just like the projection of mountain contours.

A large number of curved surfaces in architecture presents some challenges, and even small deviations may add up to big errors. The architects adopted the approach of “gathering parts into a whole”, with a single center leading all the curves, enabling all façades to be achieved by standard unit splicing. Finally, the accuracy of the design scheme in project implementation is guaranteed.

“Diversity in one place,” Achieving a rich urban life. At the beginning of the design of the Lushan Times, the “Three Museums in One” project adjacent to it had not yet been decided. During the design process, the architects simulated the views of the two buildings from different distances, so as to deliberate on the curved form of the buildings along the street, and to think about what is the perfect and ideal urban interface from the perspective of the cluster of buildings in the new city. After completion of the two buildings, they are “juxtaposed and opposed” on the waterfront, annotating the new city in different ways.

Since it was put into operation, the conception of Lushan Times in function, activity, and sight has been implemented, bringing a brand-new life carrier to the residents of Fuyang New City. As the architects put it, “After working on projects for a long time in an area, we have moved from individual buildings to the city as a whole”. In the practice of the whole project, the holistic consideration of the urban interface has left valuable experience for the team, and guaranteed the implementation of the project conception. Toward the goal of long-term operation, the future of this urban complex has only just begun.