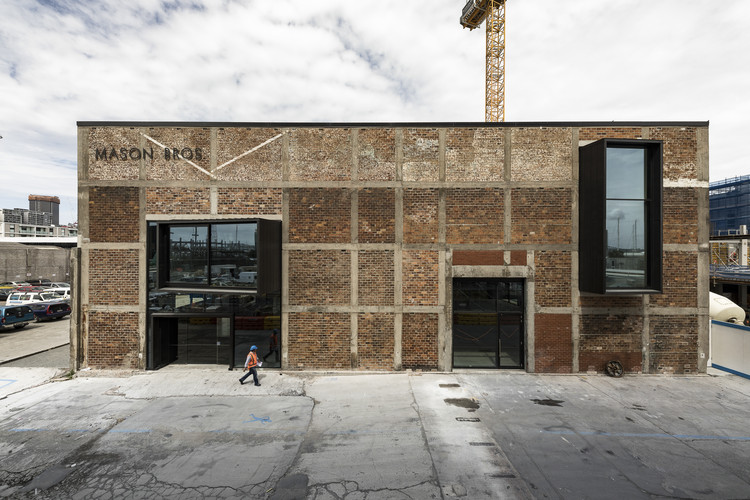 Text description provided by the architects. The Mason Bros project involves the adaptive reuse of a character warehouse space into a three storey commercial development as part of the Wynyard Quarter Innovation Precinct.  Warren and Mahoney crafted the initial reference design and masterplan for the Innovation Precinct and designed the adaptive re-use of the 1920s warehouse, developed by Precinct Properties NZ.

The maritime heritage of the two-storey character building, once an engineering and ship-building workshop, is still evident in the envelope of existing red brick as well as the distinctive sawtooth roof structure.

The conceptual approach is to suspend a highly reflective glazed object within the existing volume (separated spatially from the brick and concrete enclosure on three sides), creating a strong formal and material contrast while amplifying the presence of the existing fabric. The former character of the warehouse is retained with the dramatic sawtooth roof form dropping southern light into a major 60m long internal lane which acts as the circulatory system of the building and provides an internal pedestrian link at a masterplan level. An intentional spatial ambiguity is created within the lane through the use of highly reflective gold glazing which blurs the relationship between new and old.

The project delivers approximately 5700m2 of commercial floorspace over three levels, with lower and upper levels connected via triple height spaces and an upper level balustrade condition. The project is spatially courageous, reinventing the expected commercial paradigm in favour of a bespoke and spatially fluid approach befitting the unique opportunity of the building.

The building addresses public lanes on all frontages, with high levels of operability enabling strong activation of these urban edges. The character building fabric is retained, punctuated by contemporary glazing elements which reveal the mysterious internal object inhabiting the carapace of the former warehouse.  The retention of the character building is critical at a masterplan level, creating an authentic link to the industrial legacy of the site, while heavily influencing the architectural composition of adjacent buildings. The atrium serves as a space to host events; up to 80 people can be seated on the bleacher seats, while around 40 more can stand around the upper level to view a projector screen on the upper wall for large-scale presentations.

Materials are kept simple, with blackened steel – a reference to the roots of the building – used on the reception desk and the cladding of the ground floor meeting room, both visible from the laneway. The concrete floor was poured and ground, and a concrete tone carpet was chosen for the work areas beyond. Warmth is brought in through pops of colour in the furniture and through the extensive use of timber.

The building is designed in line with the Wynyard Quarter Sustainability Framework and has been awarded a Green Star ‘6-Star’ built rating; one of just four of its kind in New Zealand.