Materials at the Intersection of Nature, Technology, Art and Architecture 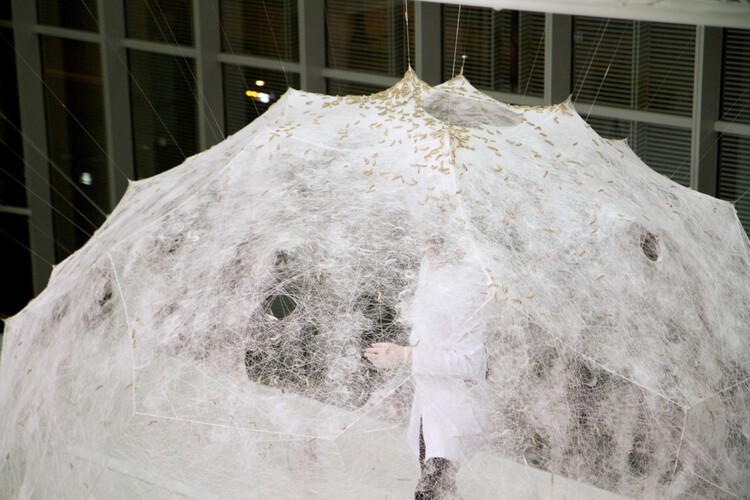 25 May Materials at the Intersection of Nature, Technology, Art and Architecture

Materials at the Intersection of Nature, Technology, Art and Architecture

Popularly known as the lotus, the aquatic species Nelumbo nucifera has a useful particularity. Its leaves are self-cleaning, or ultra-hydrophobic. This means that no particles of dirt or water adhere to its leaf, which is especially useful in the humid and muddy environments where the plant typically grows. However, this effect does not derive from a perfectly smooth surface or a resinous layer on the leaves. The lotus is, in fact, full of tiny folds that reduce the area of the contact surface and repel all the particles that try to adhere there. The lotus effect has been studied by nanotechnologists in order to apply this same effect to products, such as surfaces, paints, fabrics, and tiles that can easily clean themselves. As trivial as this may seem, when we think of the resources applied to cleaning skyscraper glass or even of the reduction in photovoltaic energy generation due to dust on solar panels, we can get a sense of the infinite possibilities that hydrophobic surfaces could represent.

Nature, over billions of years, has developed adaptive solutions that are beginning to be understood by us with new technologies applied to the needs of areas such as the construction industry. When professionals such as scientists, biologists, engineers, architects, and others join forces and focus on understanding aspects of nature, with an empathetic and respectful view, the results can be impressive.

Another similar example comes from the oceans. The US Naval Research Office has asked a scientist to look for strategies to reduce the use of toxic and expensive antifouling paints commonly used on docks, designed to prevent algae proliferation. The inspiration for the solution came from shark skin. When examining sharks’ dermal denticles, researchers found that they were arranged in a diamond pattern, in a way that discouraged microorganisms from settling down. The microorganisms do not die; they simply have no interest in remaining on the surface, due to the uncomfortable geometry. Engineers developed the technology Sharklet from this reasoning. The developed artificial pattern is extremely small—about 3 microns high and 2 microns wide—and cannot be seen with the naked eye or felt by touch, but it is there, protecting the surface from against bacteria and other microorganisms. Studies have even suggested that such surfaces may prevent the growth and spread of disease-causing bacteria, including the feared superbug Staphylococcus aureus, which are resistant to antibiotics commonly used to treat staph infections and are known to cause serious hospital infections.

These two cases exemplify the field of biomimetics, which is nothing more than innovation inspired by nature. More than seeking to reproduce a natural form, biomimicry seeks to understand and imitate biological practices and strategies to create and design products and processes that can help solve our design needs. Biomimetic materials are synthetic materials (made by man) that imitate natural ones or that follow a design motif derived from nature. Above all, it is a multidisciplinary approach. It embraces a perspective toward nature that learns from nature as a way to solve human problems, as Janine Benyus points out. The term biomimicry was popularized after the release of Benyus’ book Biomimicry: Innovation Inspired by Nature.

It is common and natural to restrict ourselves to specific areas of knowledge to seek inspiration for our work. But it can also end up creating barriers between disciplines and professions. Whether this is a legacy of our pedagogies, of capitalism, or whether it is a behavior inherent to human beings, this article does not pretend to have an answer. But when it comes to breaking down the barriers of architecture, a name that comes to mind is that of Buckminster Fuller (1895-1983). He was an advocate of what he called “Comprehensive Anticipatory Design Science” and coined the term “design science revolution.” His main premise was that the omnipotent and existing order of nature should guide all human projects, if we are to survive and thrive as a species. Many of Fuller‘s concerns about the world have materialized, while several of his ideas have been made possible and tested by advanced technology almost 40 years after his death.

In fact, responsive, resilient, or self-correcting materials are no longer science fiction inventions. An example is the Bacteria-based self-healing concrete, which self-regenerates when cracks appear. We know how much water infiltration damages reinforced concrete structures, especially through the oxidation of concrete reinforcement. But what if water, when entering the piece, could be part of the solution? The reasoning is interesting: along with the traditional mixture of the concrete, bacterial spores (Bacilus pseudofirmus) are included in tiny water-permeable capsules. They will remain inert and will not affect the integrity of the structure. This changes when a crack forms and water seeps into the concrete. As soon as the water touches the capsules, the spores are activated and these bacteria will produce calcite, which acts as a kind of biocement, filling the cracks in the concrete as the bacteria move. The new material uses biology and engineering concepts and aims at a solution that can regenerate itself. The widespread use of this solution is still limited by its high cost, but prototypes have already been built in underground structures that are difficult to access. To safely work with bacteria during construction, collaboration with biologists and scientists is essential. Of course, working with this material is not like buying a package of yeast at the supermarket. Bacteria must be processed properly and this requires an enormous amount of human resources, technologies, and knowledge—that is, many disciplines sitting at the same table to develop the same project.

However, it is difficult for our imagination to move past the repertoire we already have to arrive at something really creative. So much so that, so far in this article, only solutions using known materials have been cited, which do not go so far as to redefine the way constructions have always been made. Neri Oxman, professor at MIT and coordinator of the Mediated Matter Group, points out that “since the industrial revolution, the world of design has been dominated by the rigor of manufacturing and mass production. Assembly lines dictated a world made of parts, framing the imagination of designers and architects, who were trained to think about their objects as a result of parts with different functions.” This means of production contrasts the natural processes, where similar cells transform and adapt to perform different functions, and structures are optimized for a multiplicity of functions at various scales: structural load, environmental pressures, spatial restrictions, and so on. Instead of assembling parts, natural structures grow. Could our materials be like that too?

The concept of Material Ecology is a scientific approach that explores, informs, and expresses the interrelationships between the built environment, technology, and nature. The Mediated Matter Group works on how digital manufacturing technology can interact with the biological at the intersection between the material, physical, digital. The group has developed projects including glass printers, pavilions built by silkworms, pieces of art, and materials that could replace plastic, demonstrating the infinite possibilities that may come from the combination of nature, technology, and art.

Rethinking the way we are building our world is essential for a healthy future. Leaning on nature seems to be a logical path. Earth Overshoot Day marks the date when humanity’s demand for ecological resources and services in a given year will exceed what the Earth can regenerate in that year. In 2020, it fell on August 22. In other words, humanity used all the natural resources that the Earth could replenish for a full year by that date—including the ability of natural ecosystems to absorb carbon emissions from burning fossil fuel. The date is calculated by comparing the total annual consumption of humanity (Ecological Footprint) with the Earth’s capacity to regenerate renewable natural resources that year (biocapacity). Each year, that date gets earlier, which is very worrying. Few will object to the reality that we are going the wrong way in how we are treating the planet. As the famous phrase says: “Insanity is wanting different results by doing everything exactly the same.” If the problems are global, adopting a multidisciplinary stance is essential to facing these issues and seeking effective results.