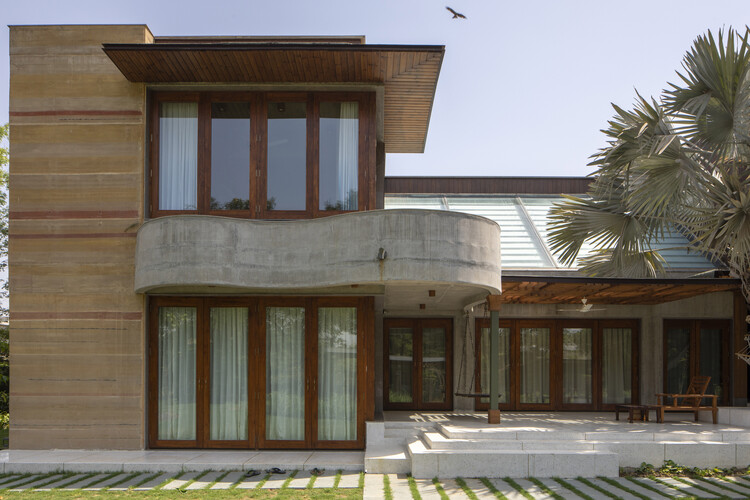 Text description provided by the architects. Our clients for this project were two girls; 3 & 9 years respectively. The house was to be made for them, as per their fancies and to appeal to their sensitivities. It was to be ecofriendly with focus on local materials and techniques, upcycling, recycling, ensuring a minimal carbon footprint.

Now this earth has been on site since forever. It has endured the test of time. So it just made sense that this very earth becomes the house! One that uses only 6-8% of cement usually needed for normal construction. In villages, people often build their houses using mud. Bringing the same idea into mainstream architecture, we built structural walls for the house by ramming earth excavated from the site itself. The earth provides thermal insulation, reducing energy consumption as well. And to add a fun element, like patterns seen in layered sand art, different natural oxides are used to create layered fluid patterns in the large monolith. The girls’ stone and shell collections, were also added to the walls to preserve their fond memories.

The wood from an old building was up-cycled skilfully into frames, doors and windows. Research around traditional lime plaster mixtures shows that there are recipes that filter out toxins from the air. We invited craftsmen who are specialists in these techniques, passed down through generations.

The kids asked if we can create a ceiling which changes. So we decided to have a sloping glass for the living room ceiling. A dynamic ceiling, one that changes with the weather. Gaze and fantasize about patterns in the clouds, experience the rain which feels like a waterfall on your heads, stare at the moon and the stars all night! This cool north light brightens the house throughout day, reducing electrical consumption.

The idea was to make it a play house. Since Ahmedabad gets hot in summer, we decided to bring the playground inside the house. There is a slide going down from the first floor. There is a secret room! One that has three different entries, but each is a mystery to find. Their excitement had no bounds when we made a guillotine door, a sliding door which looks just like the partition, and a staircase which is a part of the bookshelf on the ground floor.

The bridge on the first floor ramps down to the girl’s room for an impromptu catwalk for the fashionista. Next was an acrobatic bed, suspended from the ceiling, with a rope ladder going up and plenty of climbing and jumping opportunities. There are plenty more quirks in the house such as a hidden basin. It looks just like the dining counters but lift a flap, out folds a mirror and there you have a basin. And sketches from their drawing books became grills for windows, blackboards on partitions to bring out the Picasso in them.

These are just a few examples of the countless conversations that evolved into Meethi-Mishti nu Maati Ghar (Meethi-Mishti’s Earth House).