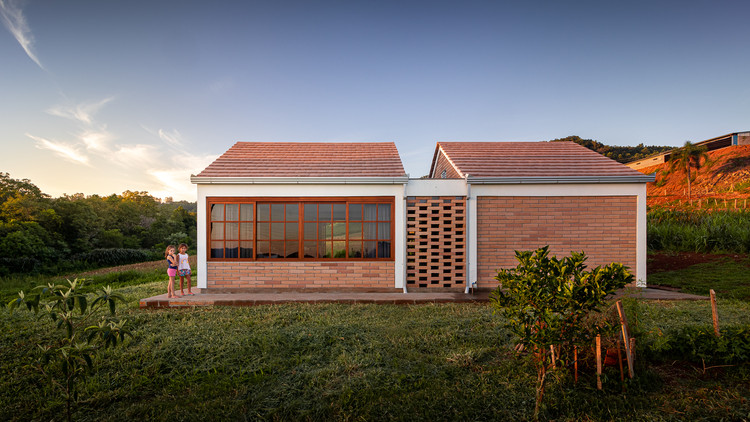 Text description provided by the architects. Customers came to us to fulfill an old dream: to build their own house in the countryside and live in the tranquility of the rural area, after returning from the capital Porto Alegre to the countryside. The pace and quality of life are different: being able to sit on the balcony and listen to the birds singing, being able to breathe the fresh air and sitting in the sun at any time of the day, moving the earth and even picking your own food. Resources were limited and so it was decided to make the construction by the Minha Casa Minha Vida program – track 01, program developed by the Brazilian government for low-income families, and this directed the project from the beginning: we could not do a project that would run the risk of the client not being able to complete it. And so we begin. The client had three wishes: he wanted the sunset view from his room, he wanted to use exposed brick and he wanted privacy.

After testing several layout options, in the house that should have a maximum of 810 SqFt, we came to the conclusion: take off the social area from the intimate area, and place internal patios on the sides, centralizing circulation. This way, we guarantee abundant natural lighting in the social area, cross ventilation in the house, the feeling of amplitude despite the small built area and still a private resting space inside the house. And it was love at first sight. Customers captured the idea and the advantages of the patios in the first presentation of the project! With the idea of exposed brick, we follow the language of the whole house: we use solid gray brick, increasing the thermal comfort of the house, we continue with the apparent electrical installations and also the concrete structure. Ensuring the unique language of the materials and pegging the cost, which would also be reduced. The traditional gabled roof, as well as the checkered wooden frames, contrasts with the ‘coldest’ materials used and brings that feeling of home. A four-meter large window was placed over the entire length of the room, guaranteeing the view of the sunset and the surrounding hills – that give name to the house!

To close the patios, guaranteeing privacy, but also ventilation, we created a cobogó – traditional element of Brazilian architecture – with the gres brick itself, taking off the two volumes: social area and intimate area. The house will be expanded in the future and its extensions have already been designed, preventing what was built from being broken and ensuring the thermal comfort of the extensions. For this, a shrimp door has already been used in the kitchen / dining area, which in the future will integrate with the garage and laundry, which will be, for now, in one of the patios. It is a very significant project for us, as it shows that a house built with limited resources, by Minha Casa Minha Vida, does not need to be a ‘standard’ house, without studying thermal comfort or materiality.