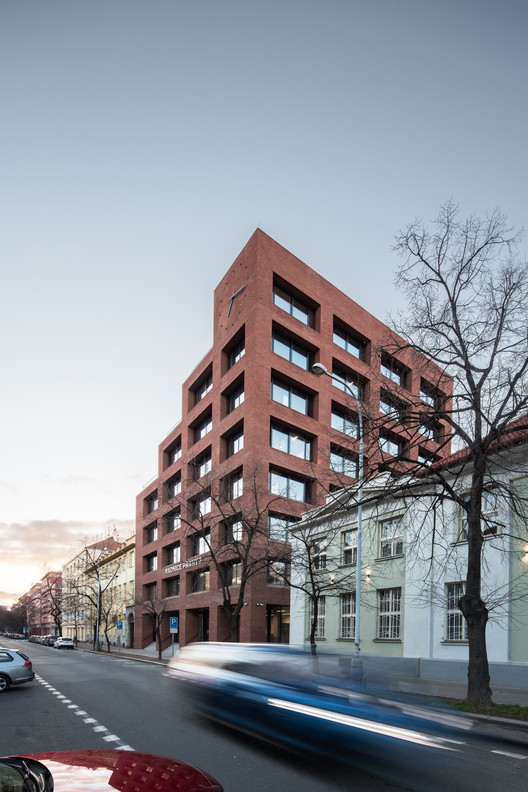 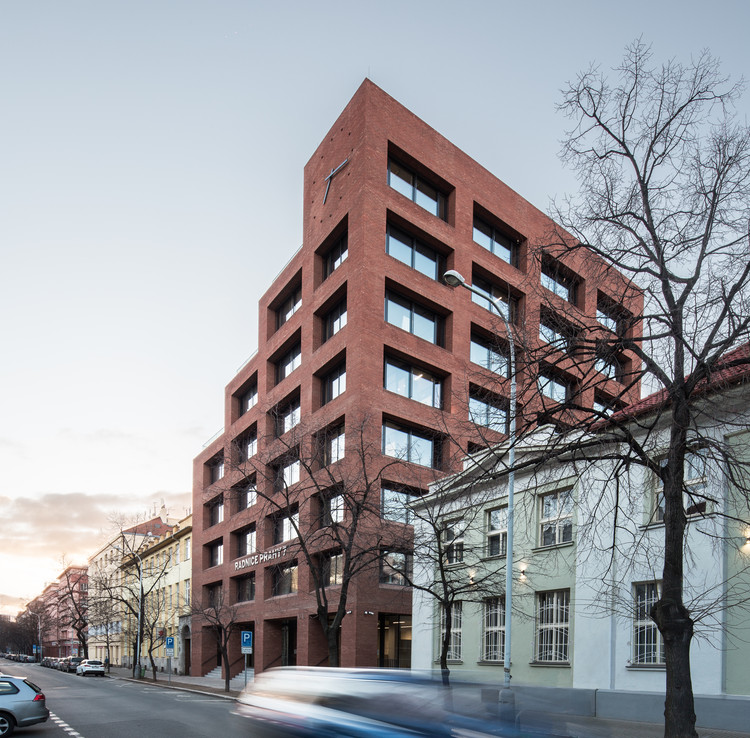 Text description provided by the architects. Expressions used during the reconstruction refer to the morphology and materials of Holešovice, the building respects a historical context of the district with its specifications, honor local industrial aesthetics. The original building was stripped to the core, only the necessary loadbearing constructions were left and the beautiful structural skeleton was exposed. The beauty of the civil engineering constructions lies in their sincerity and honesty. Therefore we honor the rhythm of the structure. We work with the motives which uplift a common building and make it noble as the town hall belongs. The town hall is a public building and it serves the people.

The building itself should arise respect and dignity, it should represent stability and solidity, it should be kind but not pandering, but mainly, it should be open, transparent, and emotionally accessible. Those qualities can be provided by using the right compositional principles with the right materials. The expression of the building with its accent on tectonics refers to the engineering attitude and thinking. The solid and grounded building of the town hall with its clear and strong tectonics indicates permanence and stability.

The raw brick used as a facade solution has a similar feature as the tectonics, it is ancient and used for more than two thousand years. Except for the aesthetic quality, the raw brick does not succumb to aging, it is not necessary to maintain the surface, the bricks last for hundreds of years and get even more beautiful over time. The accessibility of the town hall is provided to the maximum extent possible. The front facade is open to the street by arcades with stairs. The town hall was commonly perceived as a symbol of the town.

The rising volume of a tower with a clock at the highest point is typical and self-evident. The plasticity and solidity of the volume were achieved by using the grid together with a deep window lining. The facade with a strict grid corresponds to a rational room organization inside the building. One module is mostly used for one or two offices.

The concept of the building interior is based on rhythms of the spaces following each other. The emphasis is put on the loadbearing structure. The goal is to define a clear boundary between the old and new, between the loadbearing and non-bearing structure. This simple consideration leads to a strict articulation of the corridors. All of the new partition walls never leans on the old structure, the new walls create boxes, which mostly serve as storage spaces for the offices.

The joining elements which connect the new partition walls and the old structure – the girder and the columns, is represented by doors and transom windows. The natural light is let in the inner corridors thanks to this solution. Each floor has its own color for better orientation. A significant interior element, which connects all the inner spaces, corridors, and rooms, is a metal fake ceiling, which also affects the acoustics and absorbs the noise.