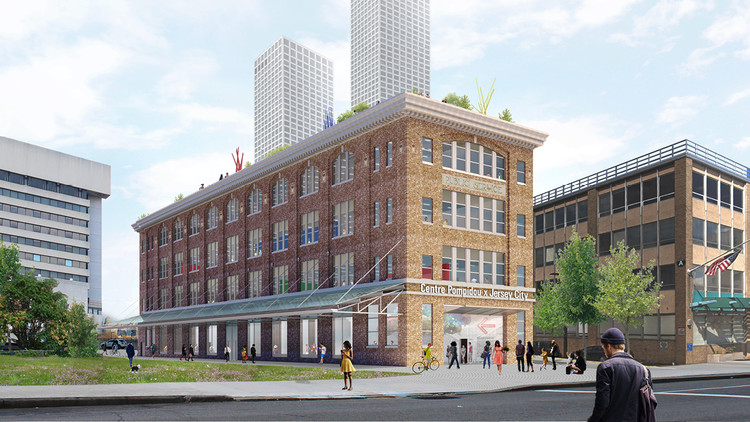 Three years after OMA was selected by the Jersey City Redevelopment Agency (JCRA) to design a new museum in Journal Square, the city’s downtown hub, it was revealed this morning that the building would be home to none other than the Pompidou Center’s first North American satellite: The Centre Pompidou × Jersey City.

In a press conference with Jersey City Mayor Steven Fulop, New Jersey Governor Phil Murphy and First Lady Tammy Murphy, Centre Pompidou President Serge Lasvignes (Pompidou Center is the Americanization), and OMA partner Jason Long, the team revealed plans for a new contemporary art museum that will not only show the Pompidou’s expansive collection but create a hands-on space for education and development. The museum will be housed inside of the redeveloped Pathside Building, a 58,000-square-foot landmark originally built in 1912 as part of the city’s trolley station compound that later fell into disuse and was acquired by the city in 2017. The building sits directly across from the Journal Square PATH station, a heavily trafficked rail stop that connects Jersey City with Manhattan for commuters and partiers alike.

“As the largest modern and contemporary art collection in Europe, the Centre Pompidou is the perfect partner to carry out our vision and solidify Journal Square as a regional anchor for the arts,” said Fulop in a press release. “When the Pathside building was slated for high-rise development, we saw a unique opportunity to change its trajectory to better serve the City as a museum and community center. Today, that commitment is not only coming to fruition, but we’ve raised the bar with a tremendous international partnership that will bring world-class opportunities to Jersey City. This is the latest major step towards our broader revitalization goals, utilizing all our City has to offer and establishing Journal Square as a cultural destination for generations to come.”

There were a few reasons given for the decision to site the first American Centre Pompidou outpost in New Jersey: First, Jersey City sits only 3 miles from Manhattan and is readily accessible via car or train. Second, the diversity of the surrounding city and flexibility in programming the new building greatly appealed to the Centre Pompidou, said President Lasvignes, and the museum can use this project to experiment and find new ways to broaden its audience. Third, according to Long, the expansive, column-free floorplates of the Pathside Building are comparable to the new Whitney Museum, making it an attractive proposition for art institutions.

The four-story building (in addition to a subbasement) will be renovated and the historic elements, such as the brick facade, terra-cotta wall toppers, cornice, and ground-level limestone will all be restored. Renderings presented also show the addition of an accessible rooftop garden with sculptures. Inside, the Centre Pompidou, which already has offshoots in Brussels, Shanghai, and the Spanish city of Málaga, will provide programmatic and curatorial support while allowing the Centre Pompidou × Jersey City to retain its own distinct identity. Apart from housing a permanent collection of contemporary art, space will be set aside for rotating exhibitions, community events, and education; a more in-depth breakdown of the institution’s programming will be revealed in the next few months.

The Centre Pompidou × Jersey City is scheduled to open in 2024.

This article was originally published in The Architect’s Newspaper.