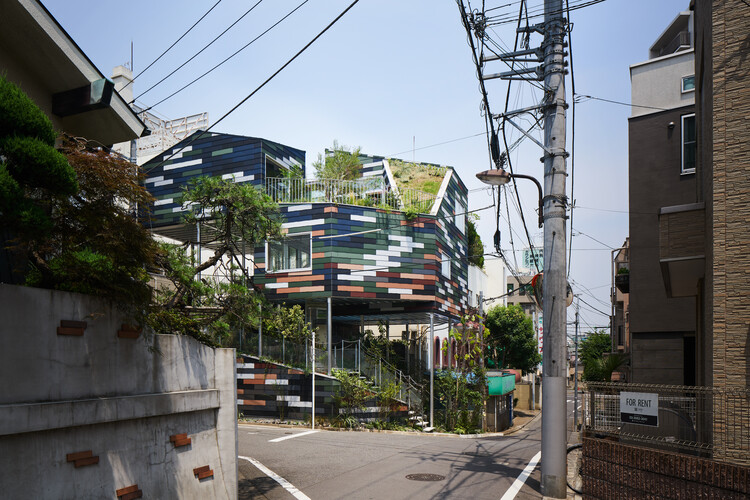 How much can you let the nature of the city flow in – The idea of designing architecture like a natural environment has not changed since I have founded my own office but recently its way of thinking has changed a bit. Even though the soft form and the space containing the difference have the certain possibility, it seems that “naturalness” is considered as the degree of influx of things that cannot be controlled completely by others.

The turning point was the experience of opening important design decisions to the discussion with the public when we were designing ART MUSEUM & LIBRARY, OTA. As a result, I felt that something like a mixture of heterogeneity or nature flowed into architecture. It was such a circumstance that the question of how miscellaneous in Minami Otsuka could flow the nature of a city with a fundamental comfort is the starting point of this Overlap House.

The site is a corner surrounded by a relatively steep slope. In the surrounding area, green such as parks and garden of detached houses are dotted along the undulating terrain.

As expansion of the ground surface of the city like this, we first take the building continue into the slope. Then, idea of drawing the slope and difference of levels into the building and realizing the collective housing has three house units overlapped we have reached the idea to stuck the three detached houses with gardens. The action of stacking affects the ceiling of the lower floor while creating a slope up to the upper floor. Both inside and outside of each house gain the terrain allowed difference of levels, at the same time it brought something like a form of house and appearance. On the other hand, a continuous external space as a void becomes a garden as an imaginary home.

In the process so far, we had been studied the volume stacking with white materials. However, neighboring detached houses have unique façade because of the fire protection area’s regulation, along the main street there are tiled buildings. In this town with miscellaneous comfort, the white of architects’ taste is indeed a bleaching feeling as though it were cutting the city.

The appearance reflecting the ordinary colors of the various elements in the surrounding city is like simulating. The roof and exterior wall of the slate’s mottled color gradually changes according to the gradation of the ground, city and sky as it goes up from the bottom. The pattern of color which does not lose the whole continuous feeling even if it is applied in a random order at the construction was decided using an algorithm.

This architecture is a transparent place like a garden blending into the city, and it is also a unique existence with a strong identity. But there is not a closed singularity, it is a base of individual or family opening to the surrounding area. From the inside through the garden of void, roads and people walking on the street, signs and even neighboring trees are felt as if they are extensions of their own garden. It brings an amazing expansion to this small apartment complex. It is because the house of consciousness that spreads infinitely beyond the physical boundary becomes a landscape.

The appearance reflecting the layered thinking, led by the city’s history, brings a sense of unity and incongruity into the city. The sense of unity is to let the past flow in, and the sense of incongruity is freshness. The city folds a new history in the own history in the flux of time to acquire a distinctive taste. It is the same as the way of life, expressing evolutionary history while incorporating it into the body. Erasing the history of the city nor cutting them off, layering them up creatively. It will increase the fraction of life in the city. And at that time the house will cease to be an area confined to the physical constraints and it will be a place for consciousness spreading out endlessly, a place with quality like the natural environment in the sense mentioned at the beginning .