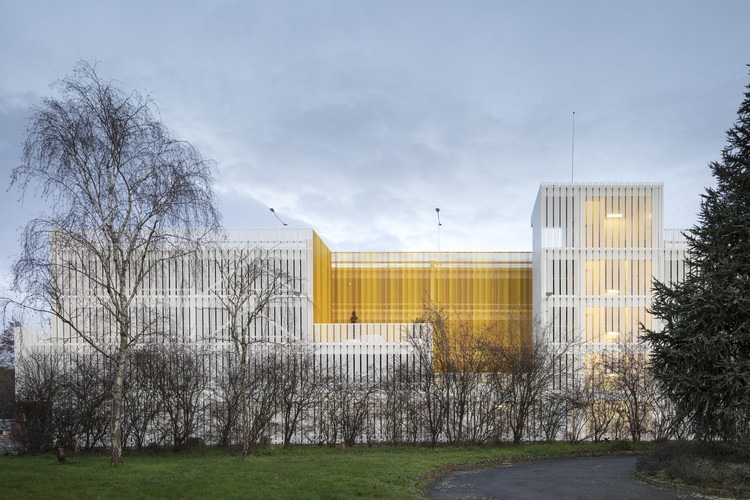 Text description provided by the architects. The project, a winner of a public competition, is located in a low-density residential environment, in the town of Bouguenais, southeast of Nantes. The proposal is part of Nantes Metropole’s desire to improve the city’s public transport network.

The complex is made up of a car park and an intermodal bus and tram station connected to each other by a continuous canopy.

The car park consists of three covered floors plus a fourth uncovered level, with a capacity for 782 cars, 20 motorcycles, and 50 bicycles. In addition to the management premises, the building includes offices for bus drivers who use the intermodal station.

Given the characteristics of the environment in which it is located, the proposed solution gives enormous importance to urban and landscape insertion. That is why all project decisions are aimed at guaranteeing both the optimal operation of the transport center and the attenuation of its impact and volume.

In order to favor the integration of the building, various strategies have been established. In the first place, landscaped courtyards have been incorporated on the facade, coinciding with the vertical communication core; a strategy with which the volume of the building is divided, at the same time that the experience is improved and the natural orientation of the users is favored. The building’s courtyards increase in dimension as they ascend on the different levels of the car park, favoring the entry of light and the appearance of terraces where the planted trees can grow. On the other hand, volumetrically, the main building appears light, thanks to a closing of perforated metal sheets and the rounded corners of the building’s end, both at the access and at the opposite end where there is a double-helical ramp that organizes the vertical flows of cars.

The project pays special attention to the management of all flows in order to avoid crossings between pedestrians and vehicles, buses, and private cars. The choice of a double helical ramp as the main hub for ascending and descending cars in the car park has been key to optimizing the operation of the proposal. Towards the outside, the shape of the ramp follows the natural turn of the buses, allowing them to border the building in order to respect the requirement imposed by the client to offer the exit and entrance of the station through the same street. On the interior, the ramp unfolds offering an exterior arrival ramp for the cars to climb to each of the floors, and an interior exit ramp, a double reverse helix, where each ramp starts at one end to allow a direct descent without crossovers.

The bus station runs parallel to the car park and the tram station. The travel distances between the different modes of transportation of the users of the intermodal station are therefore reduced, a key aspect considering the proximity to Nantes airport.