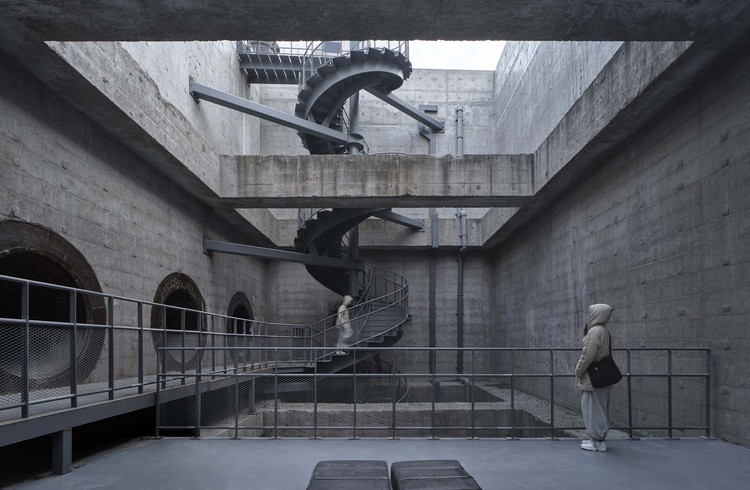 Text description provided by the architects. Pit Art Space is located in the Relic Garden of Yangshupu Power Plant, No. 2800 Yangshupu Road, Shanghai. The garden was originally the Yangshupu Power Plant built in 1913 by British investors. It is an important industrial heritage composed of chimneys, crane cranes, coal trestle, conveyor belt, clean pond, wet ash storage tank, dry ash storage tank and other operation facilities. Since the launch of the Huangpu River Public Space Project in 2015, this area has gradually transformed from a closed “no-entry” production shoreline to a living waterfront open space for cultural and ecological sharing.

The pump pit was originally a deep-water storage pit in the power plant. It was covered with a blue steel plate roof. It was like a black box filled with unfathomable river water, so the construction was difficult. In the process of site preparation, the roof was uncovered. Divers dived into the bottom of the pit and installed concrete formwork at the opening of the water pipe. Then the concrete was pumped in from the top to cut off the connection between the pit and the river. Finally, the river water accumulated in the pit was drained, the underground space was reopened to the light and could be reused.

In order to break the inaccessibility of the original space, we installed a new spiral steel staircase inside the southern pit. The stair is anchored in the deep pit with a central steel column and several steel beams extending to the surrounding walls. The gear-shaped outer contour belt of the tread and the lightweight steel structure contrasting with the rough concrete texture respond to the industrial memory of the site.

The staircase descends to the bottom of the pit and expands into a horizontal steel plate walkway, connected to the four water pipe openings leading to the northern pits. The surrounding rock walls, the intrusion of light from the top, and the introduction of the flow of people create a unique effect of internalizing the external space.

The protective transformation of the pump pit is the result of acknowledging and accepting the continuously superimposed historical process on the basis of fully respecting the original state. Through limited intervention and art implantation, not only the original closed underground industrial space was brought to light again, but the power of the original space is more fully released and displayed in this newly-transformed art space: pit walls, steel stairs, and stay-in art pieces are juxtaposed and contrasted with each other. The scene of the blending of the old and the new responds to the industrial memory of the city and inspires endless artistic imagination.