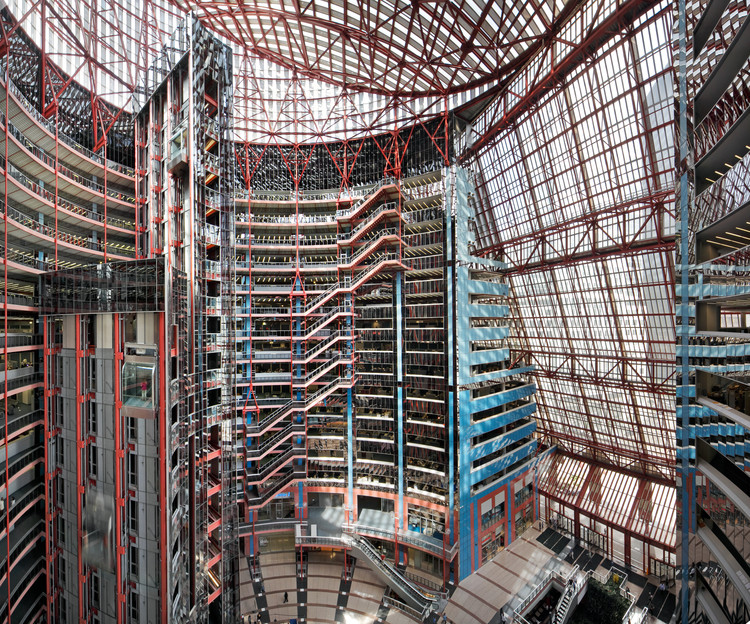 It would seem that the ongoing saga of the James R. Thompson Center, Chicago’s beloved but neglected governmental office building-slash-postmodernist mecca, might be reaching its final act.

Yesterday, Brendan Reilly, alderman of the city’s 42nd ward, announced a proposed rezoning ordinance that could kick the sale of the prized 3-acre site (12,140 m2) at 100 West Randolph Street into high-gear. The cash-strapped State of Illinois has been considering/trying to offload the property as early as 2003.

In 2019, the formal process of selling the “oversized, outdated, and expensive” Thompson Center got underway when Governor J.B. Pritzker signed a bill igniting the sale, which must be finalized by April 2022 (the original deadline was pushed back due to the COVID-19 pandemic). Chicago preservationists and the greater architectural community have been rallying to save the highly idiosyncratic (but also inefficient) Helmut Jahn-designed structure from potential destruction and replacement; many, including Jahn himself, have argued that the building is a prime candidate for an adaptive reuse-focused redevelopment scheme and could be converted to serve new purposes, including housing, while keeping the wrecking ball at bay.

The Thompson Center: A Building Facing Demolition Threat in Chicago

As reported by Ryan Ori for the Chicago Tribune, Reilly’s proposal, which could go up for a vote before the City Council’s zoning committee (and then, a full City Council vote) as early as April, would encourage developers to go big—quite literally–by permitting new construction of at least 2 million square feet. Per Ori, Reilly’s maneuver would “provide more clarity to potential buyers about how high they could build on the site, an unknown that has long made estimating the property’s value a challenge.”

In other words, while the potential for a cloud-brushing skyscraper of 100 stories or more at the site was hazy in the past, the path for another Chicago supertall will be all but cleared by the rezoning ordinance. (The glass-encased Thompson Center, completed in 1985 to serve as a secondary state capitol, totals 1.2 million-square-feet (111,483 m2) spread across 17 floors.)

“It’s one of the premier blocks in the entire city of Chicago and the potential for a 2 million-square-foot tower on this site would have a dramatic impact on Chicago’s skyline,” Reilly told the Tribune. “It could potentially add a lot more energy and activity to the Loop, at a site that has been underutilized for government functions.”

Per Reilly’s proposed ordinance, the rezoning of the site would mark a return to the same zoning standards applied to the downtown Chicago parcels adjacent to the Thompson Center, which was subject to decreased zoning during its construction by former alderman Burton Natarus, who preceded Reilly. The density-abating zoning switch-up instituted by Natarus has stuck throughout the entire existence of the building and gone unchallenged until now.

“Restoring the Thompson Center’s previous zoning designation will make the property more attractive to potential buyers, generating significant revenue for both the city and state—a win-win,” Pritzker spokeswoman Jordan Abudayyeh told the Tribune in an email.

Any and all development proposals down the line would be subject to the standard city public review and zoning approval processes.

A shiny new skyscraper at the site Thompson Center site would also generate $20-to-$25 million per year in property tax revenue, which according to Reilly, would be a newfound source of income as the current owner of 100 West Randolph, the State of Illinois, is not subject to property taxes.

While the rezoning of the site does make the purchase of the site more attractive to potential skyscraper-minded buyers, there are a handful of complications, including that the master lease for retail tenants in the building’s atrium and lower-level food court doesn’t expire until 2034. Additionally, a major public transit hub, the Clark/Lake CTA station (technically, two stations combined, serving both the L and the subway), is accessed via the building and must remain open during any potential demolition and construction activities, as Reilly told the Tribune. Both of these potential hurdles bolster the argument for redeveloping the Thompson Center in lieu of tearing it down and building anew.

This article was originally published on The Architect’s Newspaper.