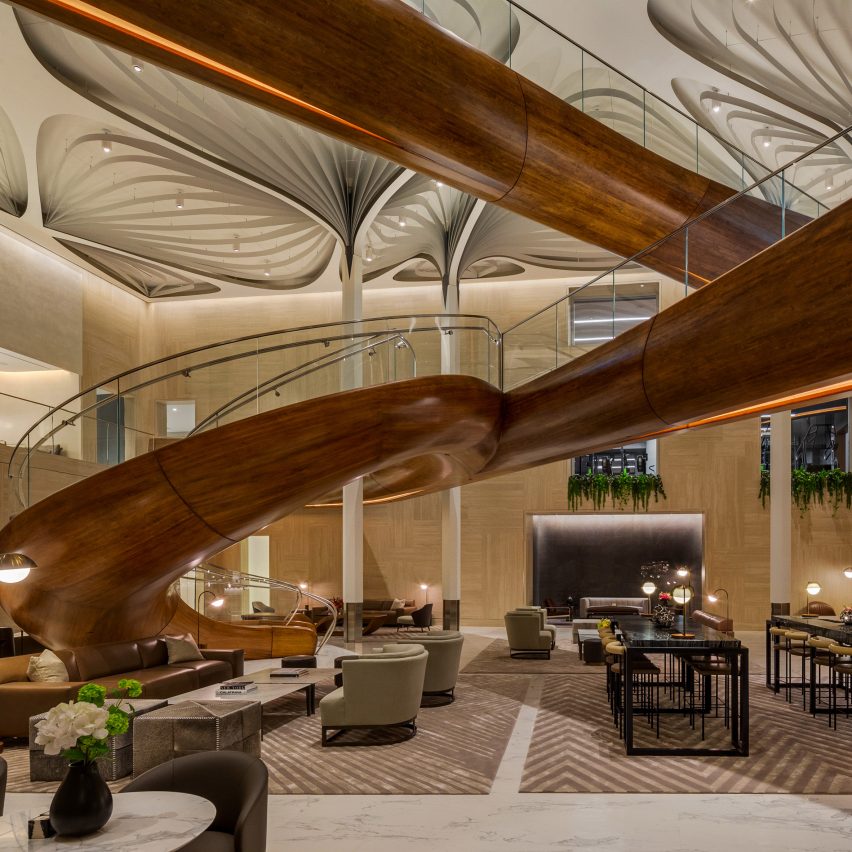 The Waterline Club by Rockwell Group links together the trio of skyscrapers that make up Waterline Square, a five-acre residential development located on Manhattan’s Upper West Side between West 59th and 61st streets.

Each of the three buildings was designed by a different architect – Rafael Viñoly, Richard Meier and KPF – and together accommodates 263 luxury apartments.

Residents now have exclusive access to 77,000 square feet (7,153 square metres) of leisure amenities available in The Waterline Club, which occupies three subterranean levels beneath the development.

When devising the interiors, Rockwell Group made sure to make room for activities that “appeal to both left and right-brain thinking”.

“Our research led to a major observation: New Yorkers have diverse, dynamic interests,” the firm explained.

“Rather than offer only the typical athletic facilities, we wanted to appeal to New Yorkers’ balanced approach to life, which includes art, music, community, and play,” it continued.

The central hub of the club is a vast travertine-lined room, dubbed Nexus, which is located down on the third, lowest level. Dotted with an array of plush leather sofas and sculptural armchairs, the room has sightlines through to activity rooms at this level like the gym and tennis court.

At this level there’s also a 30-foot-tall (nine-metre-tall) rock climbing wall, a half-pipe skate park, a golf simulation room, a music recording studio and an indoor greenhouse where residents can do gardening.

Winding up and across the Nexus is a sinuous wooden bridge that connects visitors to amenities on the club’s upper floors.

Rockwell Group, which describes the structure as a “circulation ribbon”, took cues from other notable pedestrian paths in New York such as the spiralling walkway inside the Guggenheim Museum and the looping running track that goes around Central Park’s reservoir.

“The bridge inspires guests to seek out new adventures,” added the firm. “It dips down in the centre, which gives the illusion of tension or stretching and also evokes speed and movement.”

Among the selection of amenities on the club’s second floor are children’s playrooms, a games arcade, a pets area and a variety of fitness spaces including a basketball court, kickboxing studio and mini athletics field which is fit-out with astroturf.

This is followed by a sauna, spa treatment rooms and two swimming pools – one of which is Olympic-sized – up on the club’s first floor.

The Waterline Club is a short distance from the high-end hotel that Rockwell Group and Joyce Wang Studio designed for fitness brand Equinox.

Opened to the public at the end of the last year, the hotel includes 212 guest rooms, a state-of-the-art gym and a rooftop pool that directly overlooks Thomas Heatherwick’s Vessel project.