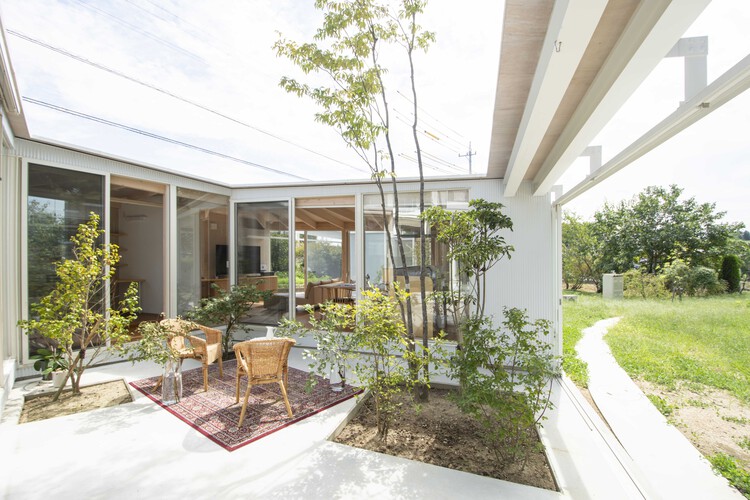 The planned site of this house is a calm place with a view of the Suzuka Mountains in the distance and fields surrounding it. The road in front is a gentle slope, and there are cluster of enoki mushrooms on the premises. The owner runs a dental clinic next to the north and wanted a plan for the entire site including this house.

This house built along the deformed site boundary almost as it was. There are no walls or fences. There is a height difference of 1 m or more at the planned site, but it was not created and was taken into the room as a ramp. The plan along the boundary of the site, a floor with a height difference, and a roof that descends parallel to the ground. We replaced the characteristic environment with the individuality of the architecture.

The plan took the form of a courthouse, with rooms arranged in various orientations. With a plan using a direct grid, it is difficult to secure an indoor area, and the amount of excavation on the ground increases, making it difficult to cope with deformed sites and slopes. Therefore, instead of using a grid, contour lines were used as auxiliary lines, and the building was bent along the site. The beams were laid out radially around each of the four courtyards, and they were continuous along a meandering road-shaped room.

A promenade was planned on the western site, which cannot be built. The site, which had been abandoned for a while, can now be used not only as a vast backyard for the owner’s family and parent households living in the main building, but also as a garden for patients visiting the dental clinic.

We are reminded of the possibility of architectural creation in the countryside in the current situation where houses will be dispersed toward the suburbs, avoiding excessive congestion in the city. It’s not just about being safe against viruses and changing the way we work with technology. This is because finding each particularity in the endless expanse outside the city seems to be a manifestation of modern values ​​that seek diversity.