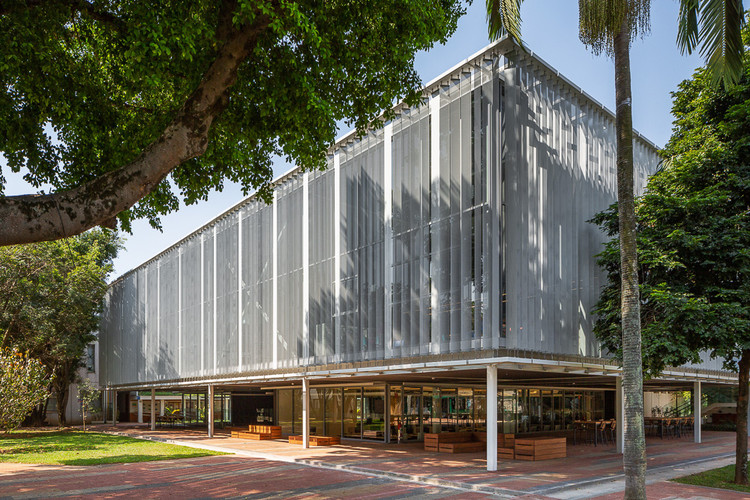 Text description provided by the architects. The contest of a new library of Colégio Santa Cruz, one of the important traditional schools of São Paulo, emerged throughout the process of campus modernization and restructuring, with the aim of free areas integration. Due to the privileged footprint, at the centre of the campus, the original project was not corresponding to the building importance, since it was not integrated with the whole environment.

The project proposal consists of the comprehensive view of the building complex and campus free areas. Leading to the concept of intervention which contributes to the environment, ahead of the building performance appreciation as an isolated object.

The site visit enabled the understanding of important occupational dynamics, just as free areas used to provide living spaces and social interaction. Dynamics comprehension became essential for the project development  and program rearrangement. The ground level as free space is one of the most important aspects for people flow and socialization, strengthening the aspect of a meeting space.

Library principal space is placed on the upper floor, preserved and suspended over the ground. Computer and “maker” rooms were relocated on the ground floor, composing the close nucleus. Consequently, buzzing activities are outside the library quiet space, which is on the upper floor. The mezzanine is composed by administratives rooms and control areas. Beside this area, the whole library has double ceiling height, providing a wide and flexible space, aspects that guided the project.

Vertical circulation and services core became more comprehensive. Besides that, cores were relocated on the facade, providing natural ventilation and lighting. In order to contribute to the complex appreciation, one remarkable aspect was identified on ground layout, a clear geometric pattern present on urbanization and landscaping. From this observation, the idea to concept a building through geometric simple shapes. Enabling the harmonious insertion of the new building at Santa Cruz campus.

The building was arranged as a series of squares, providing activities flexibility. Moreover, the structure concept was projected to stem from a simple grid, without large spans, allowing the light volumetry, besides the fast and economic construction.

The constructive system proposal is composed by a reduced number of industrial elements: a super- structure mixed of steel profile and slabs; prefabricated concrete panels, aluminium and glass joinery closures; dry-wall intern divisions; and also trim industrialized components the rationale construction were kept and improved by the light and modulated structure. The coverage solution was simplified with metallic structure and metal tiles.