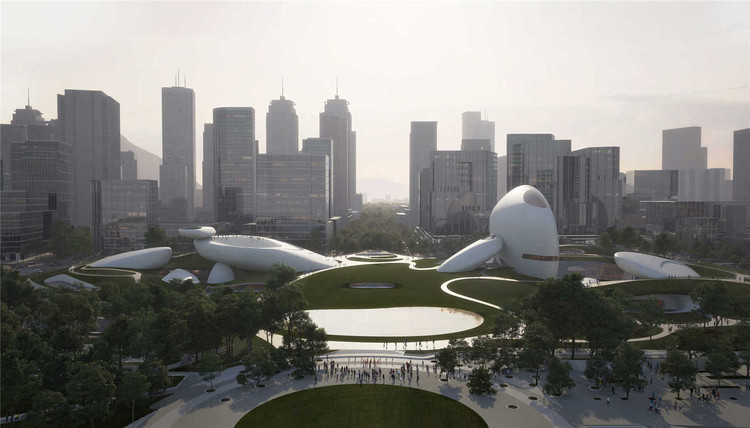 “Shenzhen Ten Cultural Facilities of New Era” serves as a significant international design competition that has attracted much attention and investment from many high-level active architects worldwide.

Below are the winning proposals of “Shenzhen Ten Cultural Facilities of New Era”.

Located in the Dongjiaotou Area in Shenzhen Bay Coastal Leisure Belt, on a 175,000 m2 site, the Shenzhen Opera House has a gross floor area of 222,000 m2. Envisioned as a “new platform for international cultural exchange, a new landmark of art and culture in Shenzhen, and an art parlor for Shenzhen citizens”.

According to the architect Jean Nouvel, “The design takes a complete and unique perspective to shape an oriental scenario. It gives shape to a roof that echoes with the mountain and the sea, highlighting the unique advantage of the site and creating a sense of publicity and place for the gray space under the roof.”

The 90,000 sqm project is located in the urban core of Shenzhen, sitting on the right side of an ecological axis and in the middle of the Xiangmihu area. The purpose behind the project is to display and publicize the “achievement of reform and opening-up” through an open welcoming site. The exhibition hall is set to be an institution that collects evidence and research materials, all while an innovative modernization of the city, highlighting Shenzhen’s public culture and urban civilization.

MAD Architects, led by Ma Yansong reveals its master plan and architectural design for the “Shenzhen Bay Culture Park.” The ambitious cultural complex covers an approximate area of 51,000 square meters, with a total building area of ​​182,000 square meters, and includes the Creative Design Hall, the Shenzhen Science and Technology Museum, with an expansive public green space along the waterfront in Shenzhen, China.

Set between the young vibrant city of Shenzhen, and the quiet oceanfront, “Shenzhen Bay Culture Park” juxtaposes two transcendental scales of time – the ‘ancient’ and the ‘future’ – through the setting of an ethereal artistic urban landscape.

Guoshen Museum, located on the coastal frontline of Qianhai Bay in Shenzhen, is designed by the Architecture Design and Research Institute of the South China University of Technology. With an investment of 3.5-billion-yuan (US$540 million), the museum covers an area of 32,300 square meters with a floor space of 120,000 square meters.

Upon completion in 2025, it will be a modern and comprehensive State-level museum and world-class public cultural facility that integrates cultural education, architectural art, and cutting-edge science and technology.

The design was selected for it signifies Chinese civilization, inheriting the cultural genes of the National Museum of China, and highlights the coastal and urban areas of the city.

ZAHA HADID Architects, together with the Beijing Institute of Architectural Design, has proposed a winning design for the future Shenzhen Science & Technology Museum, located within the Guangming Science City. The museum will become a pearl of the Guangzhou–Shenzhen Science Technology Innovation Corridor.

Linked with universities, schools, and innovation centers across China, the museum will form the region’s World Class Science City, becoming a landmark institution that will showcase and strengthen Shenzhen’s global position as a leading center of innovation and technology.

Japanese architecture studio SANAA has revealed its design for a museum in Shenzhen, which will be enclosed by a collection of hemispherical forms blanketed by a mesh louvered roof. Dubbed Clouds on the Sea by SANAA, the 100,000-square-metre Shenzhen Maritime Museum will have a long horizontal, cloud-like structure that was designed to appear as if it was rolling off the South China Sea.

Designed under a team collaboration effort comprising Danish architectural firm 3XN along with B+H, a consulting + design solutions office, and ZHUBO Design, the new Shenzhen Natural History Museum is dedicated to interpreting the laws of natural evolution. Located in the Pingshan District of Shenzhen, next to the Yanzi Lake, the 42,000m2 intervention will showcase the geographies of Shenzhen and its ecology from a global perspective, actively advocating science.

Once completed, it will be the first large-scale comprehensive natural museum in Southern China.

According to KSP, “The shape of the building, its uniform stone façade, and the museum’s projecting roof link the two building sections visually. The roof symbolizes a door to the world of knowledge, art, and culture. The public plaza provides a space for dialog, not just between the building sections but also between visitors, the urban space, and our architecture.”

Dominique Perrault Architecture, together with Chinese studio Zhubo Design Co, has won the international competition for the new campus of Shenzen’s Institute of Design and Innovation. Stretching along a mountain range, the large-scale horizontal structure preserves the views towards the landscape, while creating a strong relationship between the learning spaces and the environment.

The new campus will form part of a larger site serving the Southern University of Science and Technology (SUSTech) which will accommodate over 4000 students. Inspired by the Chinese character «-», the design consists of a single volume more than 700 meters long, which seems to hover above the ground like a horizontal line in the landscape. The program is organized around two main elements, which the architects define as the “Hyper-Ground” and the “Hyper-Roof”.

Miralles Tagliabue EMBT, together with Shanghai HYP-ARCH DESIGN, has won the international competition to design the Shenzhen Conservatory of Music. Characterized by the dialogue generated with its surroundings, the complex integrates music and art in nature with a proposal of organic and sustainable architecture.

The winning proposal for the music school by Miralles Tagliabue EMBT includes multiple buildings, integrated into the Chinese University of Hong Kong (CUHK) Campus, Shenzhen, creating a “unique educational model based on the relationship with nature and the belief in the ability of architecture to motivate creativity in the university community.”