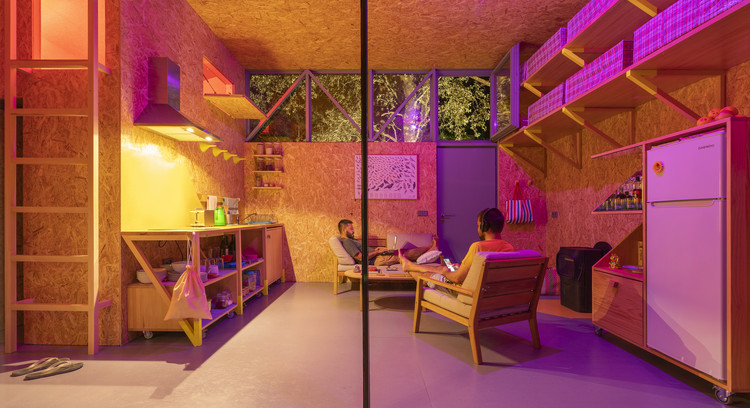 This project is located in a housing development in the Western Sierra of Madrid. Set within a pine forest, next to a SPA (Special Protection Area) for birds, it forms part of a biodiversity-rich area that is currently under threat. The project consists of a socio- bioclimatic, multifunctional cabin for a migrant couple and their extended family, as well as other, small animal architectures based around one insect that has become a defining agent in this ecosystem: the pine processionary moth. Together these make up a micro-landscaping and architecture project for humans and other animal species in which alternative ways of inhabiting this place are explored from a care perspective.

Human Architectures. The main volume of the cabin is a small, prefabricated structure, framed with eleven pieces of pinewood from Soria, about 250 km from the site. It was designed to reduce the energy used in the construction and during its useful life. The layout considerably expands its uses, allowing two people to telework and comfortably accommodate guests. This is achieved by rethinking the interior spaces: the master bedroom is replaced by a sleeping capsule, the roof is used as an outdoor raised living room, and a transformable, multi-use office can be used as a guest bedroom or dining room.

The heart of the dwelling is a kitchen-living room with 4m of headroom. A horizontal window high up on the south face allows winter sun in since the plot lies on the north face of a hill. On the opposite face, there are sliding glass doors, and an elevated porch surrounded by netting that prevents accidental falls and birds flying into the glass – a significant danger for birds.

The outdoor-living room-garden is equipped with a hammock, a movable piece of wooden decking, and a screen used as a summer cinema and for family video calls. Despite being outdoors, this living room offers intimacy due to a porous membrane around the perimeter composed of wood offcuts. Its shades of Jacaranda mimosifolia purple recreate imaginary fragments of landscapes in South America – where both the tree and the cabin’s residents are from – bringing those landscapes into dialogue with those of Madrid. As well as offering privacy, this membrane also provides representation for this non-heteronormative, transnational family.

Synanthrolove Architectures. This naturally rich ecosystem currently suffers from serious imbalances. One of the actions that are harmful to the biodiversity of the forest is fumigation to reduce overabundant species, as this affects the related species and also other species indirectly. Perhaps the most common and worrying example of this here is the use of insecticides to reduce the population of the pine processionary moth. Rather than attempting to exclude it from the ecosystem, and understanding it as an inhabitant of the forest, one alternative is comprehensive forest care, including biological control by encouraging biodiversity and caring for the moth’s predators. The current scarcity of predators is partly to do with prevailing forestry practices, which discourage the presence of older, larger trees and dead tree trunks, whose hollows are used as nests by numerous animals.

We have designed a micro-landscape of architecture on this plot to provide nesting boxes and refuges for various species of birds and bats, many of which feed on the pine processionary moth. These are adaptations of the essential, though marginal, work of some of our neighbours, as well as nearby associations of biologists and other environmental activists.

The (Synanthro)Love Shack is a continuation of a series of works through which we explore architecture’s ability to weave alternative relationships with environments both near and far; with those that already exist, and with future environments that can be imagined now.