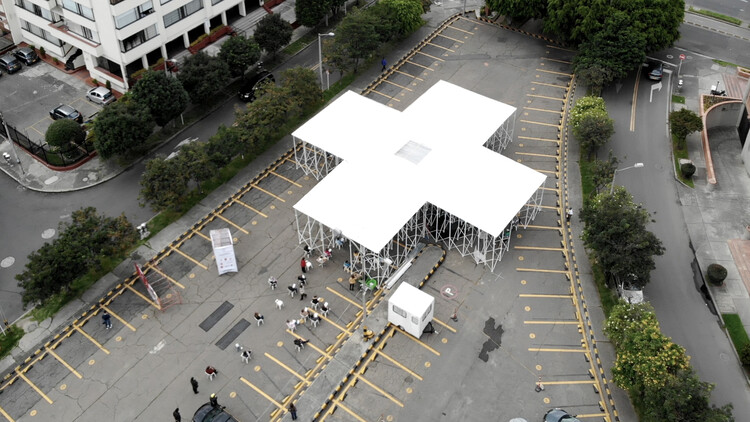 Text description provided by the architects. The people of the Colombian capital saw themselves losing hope in the idea of in-person Easter celebrations as the prospects of a third wave of Covid-19 cases intensified. Colombian culture at large is fundamentally religious, and social distancing measures in response to the pandemic have affected the religious community in particular with the prohibition of large congregations. Believers have seen themselves disconnected from their faith and churches have gone into economic crisis.

As Easter approached, architecture firm Colab-19 contacted the Archdioceses of Bogotá to donate a temporary chapel that could facilitate bio-secure in-person Easter celebrations. The Archdioceses responded with great interest and put the designers in touch with the “Santa Maria de la Alhambra” Church, a community that´s experienced particularly negative repercussions during the pandemic. Covid 19 provoked an economic crisis that made the church unable to host mass gatherings. This congregation needed a space where Easter celebrations could take place in accordance with social distancing protocols.

Colab 19 built on their knowledge of ephemeral architecture made from pre-existing infrastructures in pursuit of a model that could go beyond the vertical framework of scaffolding. They developed a model that could use horizontal formworks as the main compositional element for the chapel´s design. This system has habitability qualities similar to those of scaffolding, but it´s better suited for rapid horizontal growth that leads to a “Column Forrest” aesthetic. The designers considered similarities between this horizontal system and the architectural language present in Christian architecture and arrived at a “Greek Cross” typology that stands out as a landmark within the urban iconography of Bogotá.

Colab 19 decided on a final design and contacted the Colombian Society of Architects in order to fulfill the realization of this project. The firm suggested a donation-driven model similar to the one used for their previous intervention in La Perseverancia. The Society, an institution that supports young architects, was quickly interested in joining the team. They brought in Equinorte, a formwork company that donated materials for the chapel´s construction. Additional donations from other companies such as Andemyc, Inacar, and Ferreteria Granada made the project´s completion possible.

CESCA, a student-collective organization, played an important role in the realization of Colab 19´s proposal. Several CESCA members volunteered to help build parts of the chapel. In return, the students learned how to assemble horizontal formwork and use it as a design element in architectural compositions.

Originally planned for 56 people, the chapel had an average occupancy of 80 people during Easter celebrations. After the chapel´s interior reached its maximum capacity, churchgoers settled into other spaces within the structure; some brought their own chairs and sat outside. The Santa Maria de la Alhambra church was successfully rehabilitated for the most important Christian dates of the year.  This is the first public building in the world made with this horizontal system. The construction materials’ longevity and utility are intact after disassembly and a sustainable cycle is created.