The Double Brick House / ARHITEKTURA / OFFICE FOR URBANISM AND ARCHITECTURE


The Double Brick House / ARHITEKTURA / OFFICE FOR URBANISM AND ARCHITECTURE 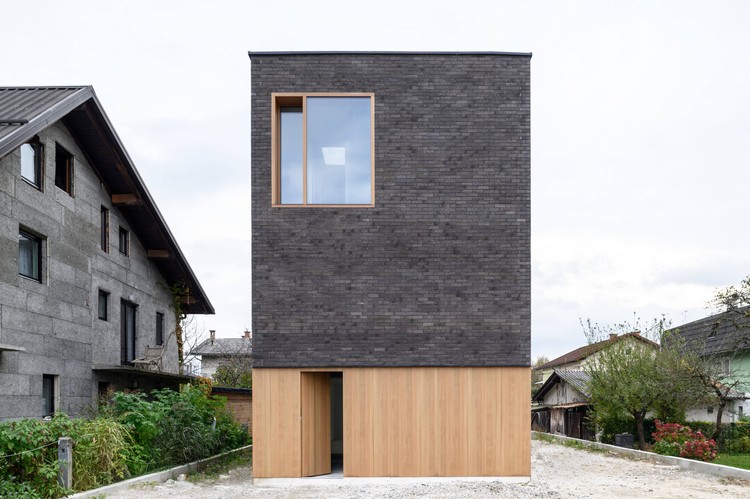 Text description provided by the architects. Rožna Dolina was known for a long time as the most prestigious villa district in the Slovenian capital Ljubljana. However, as early as the 1930s, its periphery slowly began to spontaneously fill with low-quality housing. Today these poorly maintained houses are surrounded by overgrown gardens, woodsheds, workshops and are affecting the overall aesthetic, functional, and hygienic conditions of this once important urban district. In this degraded part of the city, the process of gradual re-urbanization is currently taking place. It has started in the socialist period some 60 years ago with an extensive demolition of the existing urban fabric and the construction of new massive blocks of flats. Today it is continued with an erecting of an increasing number of new buildings, either in the form of luxurious villas blocks or individual exclusive modern villas.

A new urban matrix is emerging that will gradually outgrow the chaotic suburban tissue. This interim period is, however, full of paradoxes and grotesque gaps between the old and the new. Despite the lack of a clear spatial vision and broader strategy, the district is slowly being filled with modern facilities which will raise the quality level of both living standards and urban area. The new residential semi-detached house stands on a long and narrow plot of land, which is sandwiched between older adjacent residential houses. The new house is designed to accommodate two large families of five and it is built on the site of a previously dilapidated residential building, which was of poor quality and low living value.

The unusual building plot dictated a unique narrow floor plan, which measures only 6 m in width and 30 m in length. The height of the building is 9 m and has three functional floors. It houses two identical residential units, each having a usable area of 170 square m. The units are sequentially placed one behind the other with a common parking area in front of the building facing the access street. On the ground floor, there is a large living room with an attached kitchen.

Encompassed with glass panoramic windows the living quarters are well lit and can be fully connected with a 30 m long and 6 m wide outdoor atrium. The first floor is where the children’s rooms, their bathrooms, and a study are located. The master bedroom with adjoining rooms is located on the top floor, with access to a large rooftop terrace. The house acquired its characteristic and recognizable silhouette in the process of stacking together the functional areas.

Visually, the building is conceived as a monolith, a materially uniform cube, which is sculpturally modified, according to the sculptural principle of subtraction. The façade cladding made of dark brown bricks gives the house its desired uniformity of materiality and corporeality. The different rhythms of the windows and the alternation of open and closed surfaces on the facades do not defeat the volume perception of the building, as it is perceived on the scale of a building primarily as its texture and not as a structure.

The further arrangement of the wider spatial environment of the building will be the result of negotiations with neighbors, who may in the future follow the example and replace the dilapidated buildings and improve the general urban condition of the space, among which also such common things as using underground conduction of electrical conductors, repairing the sidewalks, fixing roads, mending fences and revamping green gardens.