The High Design of A Happy Meal: What The Evolution of McDonald’s Tells Us About Architectural Experimentation 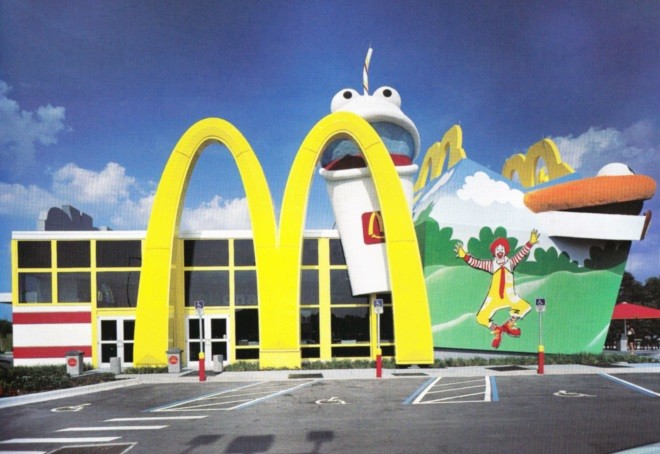 23 Apr The High Design of A Happy Meal: What The Evolution of McDonald’s Tells Us About Architectural Experimentation

The High Design of A Happy Meal: What The Evolution of McDonald’s Tells Us About Architectural Experimentation

You might not think of McDonald’s as the pinnacle of architectural style, but even the world’s largest fast-food franchise has taken some bold design risks. While the literal “secret sauce” has largely remained the same since the inception of the iconic golden arches, McDonald’s has had its fair share of experimentation and has even hired some of the profession’s most prominent names to put their own spin on the design of these restaurants- turning the repetitive and mundane into one of a kind experiences.

With more than 30,000 locations around the globe, the McDonald’s brand is present in nearly every country, city, and suburb. While the majority of restaurants don’t cater to a specific locale, as more brands recognize the need to have an identifiable customer experience and a way to uniquely distinguish themselves, McDonald’s has also begun to break their own standards and reinterpret them. First founded as a simple food stand called the “Airdrome” in Monrovia, California back in 1937, Mcdonald’s was an experiment in the speed of food manufacturing.

But even from its inception, some of its design elements stood out. The yellow arched “M” signs that gave restaurants a monumental feel, the red and yellow (or ketchup and mustard) color schemes that dominated the bespoke qualities of the interior and exterior spaces, were all future-forward ideas that were advanced for the art deco era that dominated that time. From that point through the continued era of the present day, McDonald’s continued to evolve and expand, and the novelty of the restaurant itself paired with affordable and reliable meals created the iconic brand we know today.

Fast Food Slowed Down: What’s Behind the All the Redesigns – and Is It Enough?

In the late 1960s, the fast-food chain abandoned its massive golden-arched buildings and took on a new look with a less iconic mansard roof structure, and has slowly evolved to create “McModernist” design trends, even giving us glass box McDonald’s. But perhaps one of its most important moments in the design realm came in the 1990s when Robert Venturi and Denise Scott Brown took their learnings from Las Vegas and implemented them into a McDonald’s located in Buena Vista, Florida. Their career up to this point was built upon an interest in how architecture communicates itself with the average passersby, regardless of typology or spatial experience. The over-the-top design for this particular McDonald’s was described by them as “a classic example of commercial architecture defined by signage and symbolism whose conventional order we tweaked, in cooperation with McDonald’s.” But “tweaked” may be an understatement. The massive golden arches were placed front and center, and its cast of supporting characters includes a large, floating, anthropomorphic milkshake that features a joyous expression, and a large Happy Meal box that booleans its corner. It’s the embodiment of an architecture that represents a decorated shed and a duck simultaneously, a concept made famous by Venturi himself.

While McDonald’s might not be the most widely-researched architectural topic, it does represent an evolution in the history of a particular typology that has changed little other than the form in which it resides and is commonly known. Part of what makes a place like McDonald’s so successful is how consistent it has stayed, and yet the small risks taken through architecture make it a perfect case story for what happens when design intervenes with the banal. Making McDonald’s into something so radical only expands the profession, and challenging the everyday establishments only broadens the architectural imagination and gives us more ways to experiment and innovate.