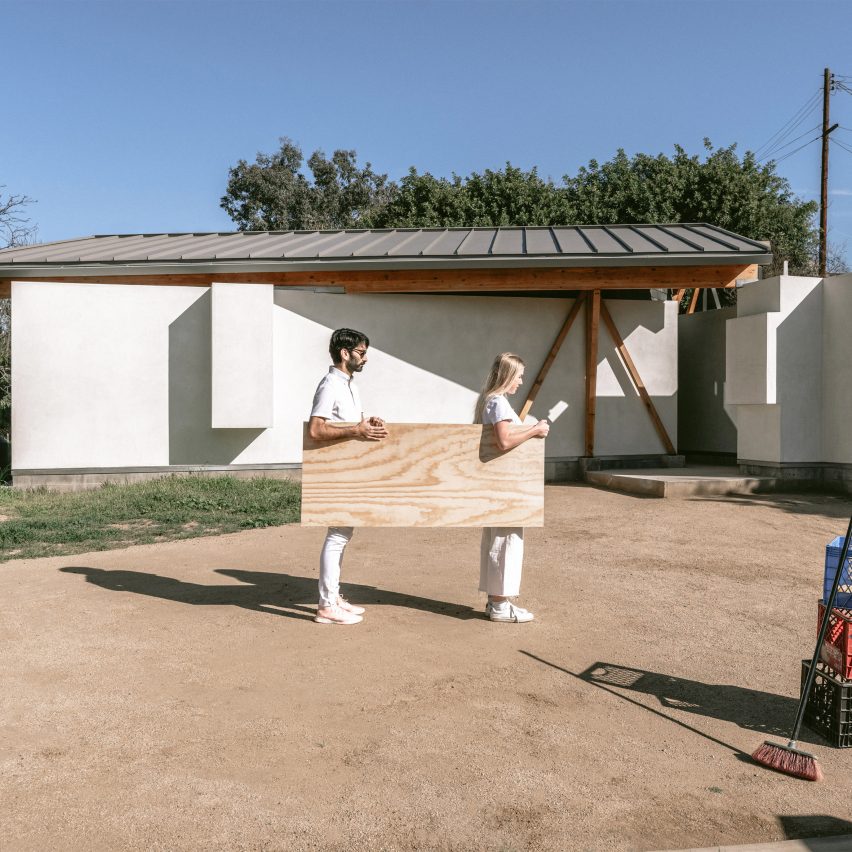 The US studio designed the expansion of the artists’ existing residence to create a flexible live-work complex called House in Los Angeles 1.

In addition to the original home, it now has a guest house that also acts as studio space, and structures for exhibitions and events open to a courtyard.

“Our project defies and reorganises some of the architectural tropes associated with LA suburbia,” said The LADG co-founder Claus Benjamin Freyinger.

“It’s not a single house with a unified programme, meant to contain a sleeping family at night, who commute off to work and school lives in the morning,” he added.

“It’s a collection of buildings that integrates work, living, and communal activities around the livelihoods of two artists.”

The LADG designed the extension to create a seamless space between indoors and outdoors. To achieve this it designed each building so that the layout of the walls does not meet the roofline above. Instead, walls extend beyond to mark areas outside and roofs project to cover nooks.

According to the studio, this principle draws on the work of Los Angeles architect Cliff May, who created a series of post-war “dream homes” in the city.

“May’s residential designs are remarkable because of the way walls and interior elements appear to float free on the ground plane, without simply reiterating the boundary of the roof above,” explained co-founder Andrew Holder.

A more obvious application of this is the roof that covers the garage, designed to also be used as an events space.

Some of the extended walls meanwhile are thick enough to also host functions – such as storage, bathroom utilities, and an outdoor shower.

This idea of double-functionality continues throughout the project, whereby spaces inside create opportunities on the exterior. For example, an indent created for the washbasin in the studio serves as an ad-hoc shelf accessible from the garden.

Drawing on the aesthetic of the existing building, the additional structures are built with simple materials. Cast-in-place concrete marked with the imprint its timber setting boards forms the base of white walls covered in smooth troweled stucco.

The exposed wooden structure of the roof above pops against the white walls. Pale grey metal panels cover the top of the roofs.

Similarly, simple materials are used inside, like white drywall in the studio that provides a backdrop to hang art.

“The finish of the studio tries to make surfaces available for the client to use and modify,” said Holder.

Other live-works spaces designed for artists include a fashion designer’s property in Santa Monica, which was recently extended to include a small studio, and a home and workshop in New York that was originally a garage.

Freyinger and Holder founded The Los Angeles Design Group in 2004, and the studio has offices in Venice, California and Cambridge, Massachusetts.

It has previously designed a bar in Culver City, California influenced by the pubs of Dublin and Belfast and a conceptual concrete pavilion for the Coachella music festival.

The post The LADG designs studio and residence for a painter and a photographer appeared first on Dezeen.