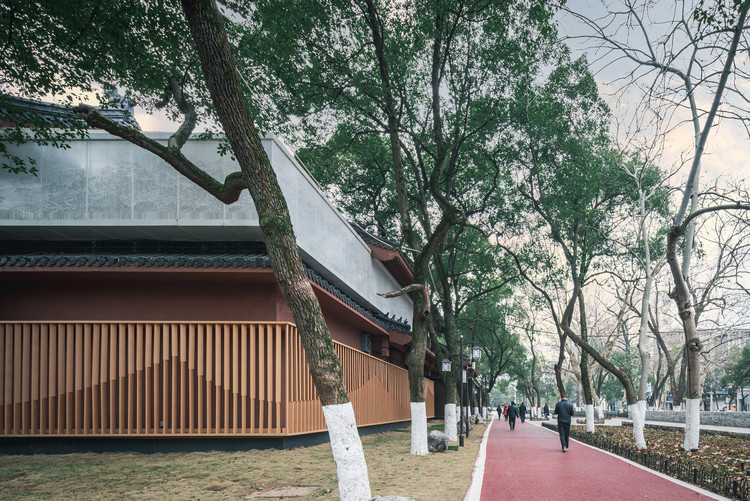 15 May The Renovation of Liangshu Art Museum / XAA

Text description provided by the architects. The renovation of Liangshu Art Museum locates in a historical landscape zone of Nanchang, cohering the Chinese garden and the city. Upon completion, Liangshu Art Museum becomes a public facade of the city, as well as an important context of citizens’ leisure activities. The original building was a tea house of the Bayi Park for years. Although its exterior component suffered different degrees of damages after years of usage and vacancy, you could still easily find its elegant physical temperament from the past.

With the shape of eaves that climbing into the sky, the building feels like an eagle that is about to fly, which reminds people of those remarkable architectures in the Tang dynasty. And after years of weathering, its roof tile appears a thin layer of royal blue color, which brings it a mysterious sense of history. The location itself, Bayi Park, was also a well-known site since more than 500 years ago.

In our preliminary study, we found that even though the original building has lost its function and become old and damaged, its proper shape and scale make it quite unified with its surroundings. Therefore, when facing a combination of a historical site and an old but still elegant building, the attitude of intervention is our first focal point in the early stage. As architects, we decided to intervene with a humble posture, prudently selected our renovation strategy, and tried to avoid disturbance to the site.

“Cautious site intervention”, “representing the elegant form of building” and “Unifying surrounding public space” are the three main strategies that we insist on during this art museum reconstruction project.

In the master plan design, the layout of the original building sits from north to south and in parallel with Supu road. To the west, the building locates right beside the park, which was originally a citizens’ fitness area. A historical remain locates to the south of the building while giant trees and bamboos grow massively in the north. It also creates a leisure and casual activities site for citizens. Its main entrance faces east along Supu road.

Based on the regularity of surrounding citizens’ activities and the requirement of the Art Museum’s functional space, we divide the project site as east and west. In the east section, we focused on restoring and renovating the original building in order to transform it into Art Museum’s exhibition and management space. In the west section, we planned to build a multi-functional space for Art Museum’s operation, expansion, and public activities in the future.

We tried to add a one-story multi-functional building by renovating the low-efficiency public garden which is to the west of the original building, and eventually make it into a well-organized, function transformable public yard, in order to motivate the energy of the site. In idle, it could become a leisure activity site. And while there is a special event, it could easily become different types of activity or performance space by adding a new facade. There are four aged trees in the middle of the west section. In order to achieve a symbiotic relationship between the newly added building and these massively grown trees, we collaborated with the structural engineers and invent a new concrete shear wall structure. By doing this, we successfully combined the structure drop-point of the building’s lighting atrium with pools for the aged trees, achieving the fusion between trees and the new multi-functional building.

In general layout, we opened the north inner space and then combined it with the entrance of park square based on the requirement of new operative functional space and the pattern of surrounding activities. This helps to eliminate the physical boundaries between the Art Museum and north park square. Also, the elegance of the elevation will become the background of the square’s landscape after reconstruction, creating abstract boundaries between the Art Museum and the park square, as well as a natural signature of the park.

The building itself is an important showcase of the city as it sits near Supu road to both the east and the south. Therefore, we restore the original road texture and create a small square for citizens to exercise and rest, in order to help the Art Museum becoming a harmonic part of the city space instead of a new foreigner.

In terms of functional layout design, we divided the tea house’s original structural space into series of exhibition halls. Furthermore, a new box space was added in order to connect the two former independent spaces on the second floor. In elevation design, we used the pictographic method to enhance the original building. To be more specific, we optimized flaws and designs that were neglected in the original building by utilizing a gradual vertical wooden grid and whiteboards with meticulous tiny holes. It recalls the mountain-like curves of traditional Chinese building roofs and remarkable paintings in the Liangshu Art Museum.