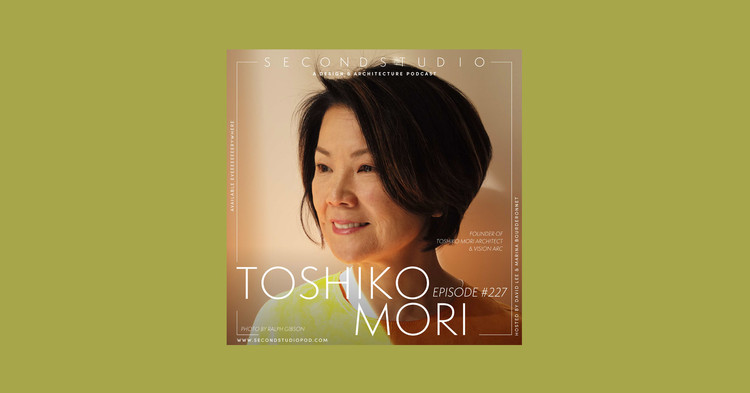 23 May The Second Studio Podcast: Interview with Toshiko Mori

The Second Studio (formerly The Midnight Charette) is an explicit podcast about design, architecture, and the everyday. Hosted by Architects David Lee and Marina Bourderonnet, it features different creative professionals in unscripted conversations that allow for thoughtful takes and personal discussions.

A variety of subjects are covered with honesty and humor: some episodes are interviews, while others are tips for fellow designers, reviews of buildings and other projects, or casual explorations of everyday life and design. The Second Studio is also available on iTunes, Spotify, and YouTube.

This week David and Marina are joined by Architect Toshiko Mori to discuss her moving from Japan to New York City at a young age, attending The Cooper Union for Art and Architecture, starting her own practice and VisionArc, witnessing the 9/11 attack, her design process, creating a temporary concert hall, and more.

Toshiko discusses her moving from Japan to New York City at a young age and studying art and architecture at The Cooper Union, New York City in the 1970s. (00:00)

The era in which I entered art schools as really conceptual. So for somebody transitioning from art to architecture was not such a challenge. It was very spatial oriented and we were working on a lot of installations as artists, and [they were] interactive. As you can imagine it was a very lively time in terms of art and performances and this was also the era in which there was social unrest. That’s when art thrives. So the film, music, art, and all that was intermingled and architecture was just a part of it. It wasn’t like going into a different discipline, but more of a focus. The reason I was more drawn to architecture as opposed to art is it’s much more of a synthetic discipline, in which one is studying sciences, engineering, technical issues, math, as well as philosophical issues and theoretical issues, and art. (11:18)

Toshiko discusses starting her own practice and the freedom of not having student loans. (21:11)

I was lucky because Cooper Union was a free school. One of the reasons why a lot of people a lot of people cannot start their own is financial issues. You owe student loans and so forth which take ages to pay off and you have no choice but to keep working for corporate offices. That’s the reality which I think is problematic. I just have to be honest and say that’s actually one of the reasons why I as able… when I’m sure everybody wants to start his or her own practice. (21:57)

Toshiko answers the question if it was difficult to start a practice at a young foreign woman and talks about how New York has changed in recent years. (23:57)

I started my practice relatively young, I think I was barely 30. Once again, when you’re so young you’re clueless and fearless. And you don’t think about any of it. I didn’t think about me being a foreigner or a woman. I just jumped right in and started to do work. Thinking back, if those labels, which might be given by outsiders, if I considered it, I might not have been that brace. So I would say everybody just forget it, whatever people try to label you as, just throw it away and do whatever you want to do and you like to do. That I think is healthier that way. Everybody wants to try to prevent you to do things by labeling you and to put you into certain small boxes. (23:55)

Toshiko shares the story behind her office’s first project. (35:38)

Toshiko discusses the relationship between architectural theory and her work, and her design process. (40:46)

What’s so fun about architecture is there’s not a single project alike. There are other professions where the work is repetitious, whereas ours is not. Every single project has a different premise, program, client, climate, site… and so we are very lucky. I’m really grateful we’re are working and every project is fresh. However, the challenge is that you can’t repeat. Even if you try to repeat, it’s not possible. You have to get back to zero again and then rethink of it. Even if you start to force what you thought you knew before it just does not work. (44:50)

As a person I like simplicity, I like clarity. In all the architecture projects, I want everything to be aligned both mentally, philosophically but also in terms of execution everything just needs to be in relationship with each other and it’s within alignment. That’s hugely important. It’s a very abstract idea, but it creates a spatial balance and harmony which… how do I say… I just cannot deal with misalignment! […] Alignment is really connecting and creating different relationships, so there’s a dialogue with different elements and one thing informs other things. (54:27)

Toshiko describes her office: Why likes keeping it relatively small and doing competitions. (01:04:00)

Toshiko discusses her proposal for a portable concert hall and the benefits of architecture that is more agile and adaptable. (01:09:17) (01:21:59)

We were looking at eras from Japan’s metabolism to Superstudio to Archigram, in which architecture was really more infrastructure-related and then more adaptable, and then more dynamic entities. Then it really had [become a] more theoretical and image-based manifesto, but maybe we are at a time in which we need to rethink those initiatives as something which can be realizable. (01:23:52)

Toshiko discusses the fragility of architecture as a profession and why teaching is important. (01:16:30)

Our profession is quite fragile and because we, as you said, don’t make much money, some other construction business can completely take over what we do. So unless we instill in the next generation the value of what we do and how we do it, and how we keep driving and thriving… it’s not easy. I mean, we could be written off really easily by anybody with a smart economist as an unsustainable and unnecessary profession. (01:20:30)

Toshiko talks about why thinking abstractly is closely related or necessary for creating well-designed buildings. (01:24:48)