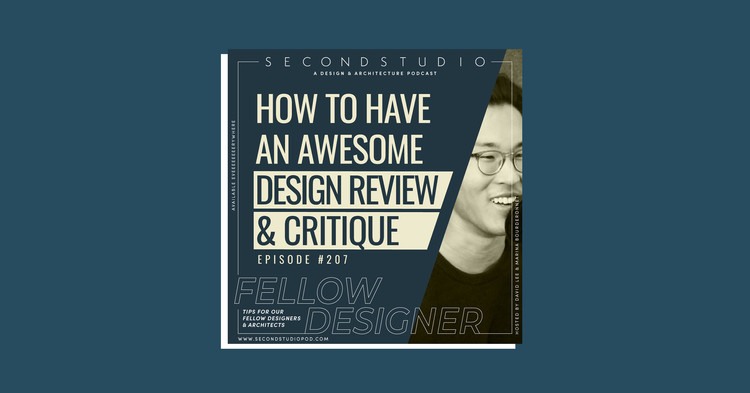 09 May The Second Studio Podcast: Tips for Having a Great Design Review and Critique

The Second Studio (formerly The Midnight Charette) is an explicit podcast about design, architecture, and the everyday. Hosted by Architects David Lee and Marina Bourderonnet, it features different creative professionals in unscripted conversations that allow for thoughtful takes and personal discussions.

A variety of subjects are covered with honesty and humor: some episodes are interviews, while others are tips for fellow designers, reviews of buildings and other projects, or casual explorations of everyday life and design. The Second Studio is also available on iTunes, Spotify, and YouTube.

This episode is also available on iTunes, YouTube, and Spotify. This week David and Marina discuss the best strategies for getting the most from a design review. The two cover when not to listen to critics, the two essential parts to any critique, why design reviews are often a complete mess, crying at reviews, controlling a review, bad feedback, how to structure a productive review, and much more. Enjoy!

The Second Studio Podcast on What Architects Do

Why are reviews important? How much pressure should students put on design reviews and the feedback they receive? (00:00)

Being a designer is finding a weird balance between listening to everyone and listening to nobody. Students tend to want to go one end or the other. Why? Because it’s easy. It’s really difficult to listen to everyone, but also listen to no one at the same time. It’s difficult, but that the threshold and the fence you need to balance on. You should absorb what the critics say, but don’t let it define you, don’t let it destroy, and also, don’t let it make you think your god’s gift to the world. (06:57)

The importance of displaying your work and showing up to the review. (09:35)

Why students need to understand the review from the perspective of the critics and educators. (12:03)

Are reviews supposed to be easy? Taking feedback. (13:44)

If I pin up at a review, I want to know what’s wrong. It’s the same thing if you hire a tutor or coach. I don’t go to a tutor expecting them to just praise me. I don’t want a ‘yes man’. I want to know what’s wrong and how I can improve. […] If you get critics who say only great stuff, that should make you angry, because they’re wasting your time. They’re wasting your money or your parents money. That’s not what the critics are there to do. (15:14)

There’s a difference between speaking bluntly and attacking someone. Usually, for most people, it’s pretty obvious the differences and it’s not good when we allow ourselves to blur those lines either as the person who is assaulting or as the student or educator. Speaking honestly and succinctly is not the same thing as being mean. (17:20)

‘Leveling the playing field’ of the review: Turning the review into a conversation. (18:10)

Often times after students done presentation, they’re just on the receiving end of the critiques and it’s not really a back and forth. But, you (students) are free to ask questions and respond to what the critics are saying about your project. You’re not just there to take punches, you can also poke or punch back if you have to. Often times that’s an opportunity that’s missed… maybe because the students are too much under the emotion of receiving critiques and they shut down when they’re done presenting. You (students) have to respond to the critiques. You have to ask them questions. You have to disagree if you strongly disagree with them. (18:10)

Your time presenting is so limited and so small, but at the same time you have all of these critics, meaning resources, available to you at this moment. You have to squeeze as much juice as you can from that exchange. You cannot be passive and attached. You really have to get engaged with them. (20:25)

Why design and architecture reviews can be incredibly unfair and how students can fix the situation. (22:10)

Putting the critics (and their feedback) up on a pedestal and trying to please all of them. (25:45)

What does it mean to be a designer? It means to always be surrounded by a bunch of questions and then when you feel like you’re about to get the answer you force more questions on yourself. So you’re always in a state of being lost to a certain degree. For students, when they are starting off, it’s uncomfortable; it’s super uncomfortable to be like this and students always looking for something to latch onto to give them assurance. “This critics is a professional, he said this. Let me just clamp on to that because at least I know if I do that, then one: there’s a higher chance it’ll be right because this ‘professional’ told me and two: I don’t have to take responsibility. (27:12)

When students change their project by addressing all of the feedback the critics gave:

Translating the critic’s feedback to meaningful and helpful information for the project and the student and why teachers should always have to do a post-review analysis. (32:20)

All of times students think that after they’re done presenting and done with her critiques, that that’s it. The work is done. But no, it’s not really done. You have did that extra step after you are done presenting: taking those notes down and thinking about what happened to really use that information for the next review. That might sound like, “Oh wow, these people are crazy no one does that after reviews.” Well guess what? Everyone should be doing that because it’s really what’s going to help you. (34:25)

You (student) are going to do your best, but it’s not going to be perfect. You are going to have criticism, because that’s what a review is about. It’s not a graduation ceremony where you have a gown, and you get candy and money, and everybody is cheering you up. It’s not graduation yet. It’s a review. It’s a critique. I feel like a lot of students expect it to be a mini-graduation. (41:22)

How to know if feedback is constructive or correct: Understanding the two parts of any feedback and whether or not the critics know the design. (43:00)

Should review feedback be more focused on the student or the building? (52:25)

There tends to be too much focus on the artifact itself, the building itself. But, the building actually doesn’t need help. The building is indifferent to what any of us think. Help the creator figure out how to make something better. (55:17)

When critics have discussions that are beneficial and interesting for the critics, but understandable or helpful for students. (58:55)

Why using building references is a bad way to give feedback. Different types of critics to be aware of. The feedback doesn’t give design answers, but a design direction. (01:01:20)

Where’s your north arrow? You should look at this in the section. Two common critiques. (01:10:10)

The politics and social dynamics between critics and why it shapes the feedback given. Critics who push their own agenda. (01:15:55)

Critics who get too excited during reviews and how to control them as a student. (01:19:45)

Some tips for giving feedback: Listen and try to understand how the student views their project. (01:24:10)

The worst thing a teacher can do during the review. Should teachers give feedback or defend students during mid- and final- reviews? (01:38:45)

Critics and teachers think their job is to talk. We think that teaching and helping someone as a critic means spewing out information. Of course that’s partially true, you need to say something, but that’s maybe half of it actually. […] The real trick is to get the student to engage. (01:43:51)