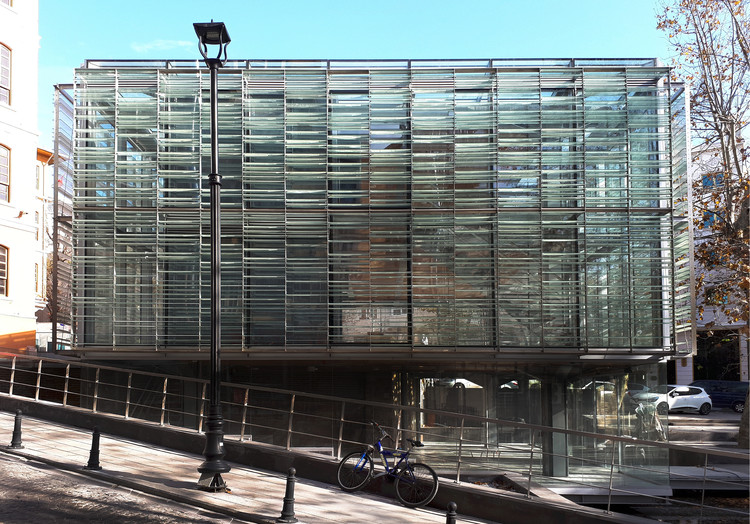 Text description provided by the architects. The Theodosius (Şerefiye) Cistern in the Sultanahmet area of the Historic Peninsula of Istanbul is a 1. Degree Historical Monument and well-preserved specimen of Byzantine Water Infrastructure dating back to the late 5th century. Built by Emperor Theodosius II, the brick domed roof of the 42.5m x 42.5m cistern is supported by 32 marble columns with Corinthian capitals.

Succeeding the 1992 and 2015 restorations of the underground cistern structure, this architectural project features a contemporary Entrance Building to the monument and the design of the surrounding urban landscape. Situated in a dense urban context, this small public space opened up after the buildings previously located right above the cistern were demolished in 2013 with the approval of the IV. Historical Heritage Committee of Istanbul. This project expands cultural and temporal frontiers by generating awareness and heightening visibility of the heritage layers that lie below. Today, this small-scale urban design project gracefully fulfills its initial aim to create a contemporary urban space and to provide both visitors to the museum and passers-by an appropriately reflective space to appreciate the surrounding historical context.

Located in the middle of the site, in between these two levels, is the new Entrance Building perched right on the corner of the underground cistern structure; in other words, it is situated partly atop the newly revealed main exterior wall and door leading down into the cistern.

The key principles of the project include uncovering, restoring and improving the perception of the underground cistern. In this context, after the removal of accumulated debris from atop the historic monument, the geometry and plan structure of the Theodosius Cistern, including material, color and texture properties, are projected up into the hardscape above, reflected as it were, onto the surface of the Cistern Plaza. On the other hand, the Pierre Loti Plaza, in continuation of the geometric order and alignment of the cistern, offers a gathering area in front of the Entrance Building and exposes the old Pierre Loti Street axis using the spatiality of the existing trees. This square is detached from the Entrance Building with a reflecting pool. The entrance to the cistern takes place via this water element as a reference to the water reservoir that lies underneath, thus allowing for a subtle transition from the busy public sphere into the dark and quiet historic space underneath.

The New Entrance Building is designed as a highly transparent, light and contemporary structure of glass and steel, in order not to compete with the architectural materiality of the Historical Cistern. Besides responding to the architectural program and housing all the needs of the museum entrance, café, restrooms, service and technical spaces, the design and size of the ‘glass box’ is determined in proportion to the surrounding open spaces and relevant buildings, especially historic buildings such as the Köprülü Mehmet Pasha Mosque and Tomb, that are architecturally remarkable geometric solitaires.

Four main steel columns support the new structure, one of which is situated right on top of the old stone corner column of the original cistern structure. The load-bearing weight of this particular steel column is engineered to be less and work as a partial cantilever, as part of the overall structural consideration in a high-risk earthquake zone.

The steel structure, wooden floors, metal roof and glazed façade are selected so as not to obstruct the historic structure underground. The second façade consists of horizontal glass louvers as solar control elements. Ventilation shutters located along the edge on the roof allow passive air cooling in the hot summer months, to support the interior climate control. All the mechanical installations and appliances are planned so as not to disturb the landscape design. The wet spaces, service areas and kitchen of the café are hidden out of sight in an opaque wooden service-box inside the ‘glass box’ building.