What Is NFT Architecture and How Is It Different from Regular 3D Models? 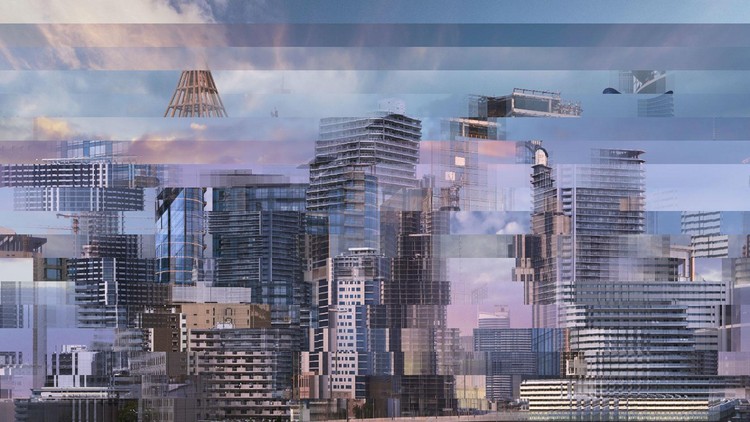 06 May What Is NFT Architecture and How Is It Different from Regular 3D Models?

What Is NFT Architecture and How Is It Different from Regular 3D Models?

Imagine yourself welcoming your colleagues to a business meeting at your home. The table is set next to the infinity pool, under the shadow of a huge curved metal structure reminiscent of Zaha Hadid‘s most audacious designs except for the complete absence of pillars. Hovering in the air, the roof completes an idyllic setting for this mansion on a rocky hillside. The house was recently acquired as an NFT and is digitally accessed via encrypted code. That’s right, this is your virtual home. The physical one is a small 40m2 apartment in the center of one of the busiest and most polluted cities in the global south.

This futuristic scenario is much more real than we might think.

The first NFT digital house was sold last month for $500,000. Designed by artist Krista Kim, the Mars House is composed of translucent surfaces and covered with magenta and blue gradients, set in a mountain landscape with an everlasting sunset. Kim describes it as a light sculpture and, in her own words, she wishes to sit in MH with friends in AR and drink Champagne, wants to have her zoom meetings in Mars House, and expects to eventually be able to transpose MH over the physical environment whenever she fancies. While such interaction is not yet possible, she intends to create a meditative environment, accessible from a computer screen or mobile phone, like a digital Zen garden, according to Kim. This strongly relates to the COVID-19 pandemic by reinforcing a virtual parallel universe with fantastical representations that highlight the desire to escape from the physical world through digital instruments of well-being.

The sale of MH marks the beginning of a new era, referred to by experts as hybrid reality, made possible most notably by the creation of NFTs, non-fungible tokens. In a nutshell, NFT is a virtual certificate of authenticity based on blockchain technology that certifies a digital file’s origin and ownership. It can represent any digital asset, image, video, music, social media post, meme, etc., making it unique in the eyes of the world. This strategy of commodifying digital assets ultimately attracts many investors and collectors. The creation of NFT has revolutionized the production of virtual art by allowing original digital artworks, which can be easily duplicated, to be traded on third-party marketplaces just like non-digital pieces.

Our grandmothers collected plates and now, we can collect memes.

NFTs are becoming increasingly popular in the media with million-dollar transactions such as the sale of the Nyan Cat meme, the ‘deal with it’ sunglasses, or the first tweet in history made by the founder of Twitter, which recently went up for auction. Also in the architectural field, designer Andres Reisinger made $450,000 by selling his digital furniture collection. Unlike MH, Reisinger’s furniture already allows some degree of interactivity since it can be placed in any shared 3D space, including virtual and augmented reality apps, games, animations, and films.

However, despite not yet allowing much interaction, Mars House sets a precedent for a new branch of architecture. Unlike the 3D models that we are used to, NFT architecture is more than just an instrument for project presentation but rather a form of art, even before it is built. And precisely because of this disconnect with the material world, it enables a creative and artistic rebirth with an ethereal aura where beauty and value lie in the freeness of unfounded and impossible structures, which can nevertheless be virtually inhabited and experienced. One could walk through the enormous and impossible sphere of the incredible Cenotaph for Newton and have a glimpse of what this utopia could be without worrying about whether or not it can be built. This allows us to develop concepts that take the profession to other levels.

Austrian architect and NFT enthusiast Chris Precht recently stated that NFT architecture creates opportunities, especially for young architects and small offices that could sell digital versions of their designs and raise money to build them in the future.

Although NFT architecture is not yet fully interactive, we are just a step away, judging by the exorbitant price at which the Mars House was sold. It sounds like another episode of Black Mirror, but it is nothing but reality – virtual reality.

This article is part of the ArchDaily Topic: Rendering, proudly presented by Enscape, the most intuitive real-time rendering and virtual reality plugin for Revit, SketchUp, Rhino, Archicad, and Vectorworks. Enscape plugs directly into your modeling software, giving you an integrated visualization and design workflow.’ Learn more about our monthly topics. As always, at ArchDaily we welcome the contributions of our readers; if you want to submit an article or project, contact us.