Talking to the Louisiana Channel, iconic Japanese architect Kengo Kuma discusses the many influences that have shaped his work – and also delves into the impact that the ongoing pandemic has had on the architectural field. In the interview, Kuma describes how influential his early upbringing was to his architectural career. Growing up in a small wooden house in the 1950s – originally built in 1942, would go on to guide his architectural perchance of using wood in his projects. Kuma also mentions Japanese architect Kenzu Tange as a key inspiration and cites Tange’s Yoyogi National Gymnasium – constructed for the 1964 Summer Olympics in Tokyo – as a project that would influence him towards an architectural career. 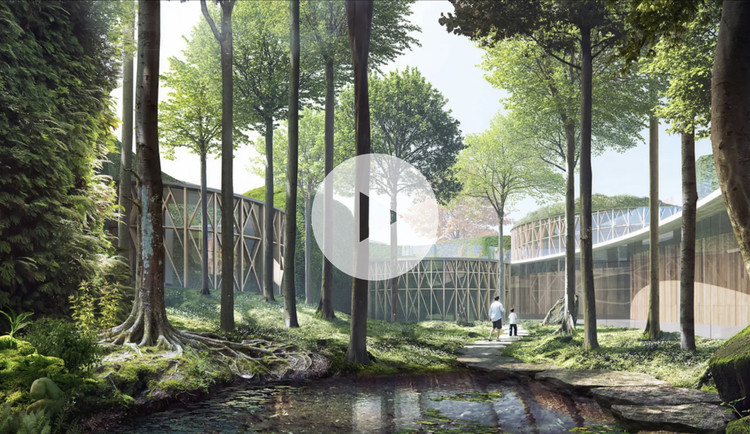 Explaining his architectural philosophy, Kuma details how he is most passionate about creating architecture “that cherishes its surroundings.” He goes on to outline the intensive contextual analysis that goes into putting together his architectural projects, explaining how he analyses the natural characteristics of a site’s location in order to inform the form of his designs. In line with the holistic nature of Kuma’s analysis stage of projects, Kuma then goes on to discuss the sustainable potential of wood as a construction material. “Wood is the most promising material right now,” he says, describing his fondness for wood as a desire to break away from the prevalence of concrete as a building material in the 20th century.

The interview sees Kuma also further elaborate on the concepts that influence his projects – most of them rooted in the natural world. He mentions being inspired and impressed by bird’s nests in particular, how birds “collect materials and make their own houses without much ado”. The “original form of the house”, he says, can be found in bird’s nests. Kuma then pivots in the interview to the current global Coronavirus pandemic, explaining how the pandemic affords an opportunity for a rethink in design – from making sure that cities are better designed for the pedestrian to stronger advocacy for environmentally-conscious design.

I am really impressed by birds’ nests. You find the original form of a house in the nest.
We have gotten this pandemic because we are spoiling the earth. And now when we have spoiled the environment, we can see that our lives are at stake. This pandemic could be our chance to change our way of thinking. After the pandemic, I want to change my architecture to be even more kind to nature. We cannot as before only think of what is inside. People have to get out and walk in nature. Cities hardly have any places to walk outside.” — Kengo Kuma

Finally, Kuma explains in the interview the design of the recently completed Olympic Stadium in Tokyo. Originally inspired by Kenzo Tange’s 1964 Olympic Stadium, Kuma instead decided to eschew the monumental nature of Tange’s project and create a structure that, whilst still being a prominent landmark, blended in with its surroundings. The Olympic Stadium is located in Meiji Jingu Gaien – a prominent forest in Tokyo – and Kuma mentions how in particular he is looking forward to seeing the movement of marathon runners as they come through the forest and enter the stadium.

“But what people need in our time is not something with an interesting form, but something which is in harmony with the forest. Our idea with that building is to show that we live in a time of harmony with nature.” — Kengo Kuma

One of the most significant contemporary Japanese architects, Kengo Kuma founded the Spatial Design Studio (now Kengo Kuma & Associates) in 1987. He has also involved himself in academia, currently a professor at the Graduate School of Architecture at the University of Tokyo, and previously serving as a visiting professor at the University of Illinois at Urbana-Champaign and professor at Keio University in Tokyo. Kengo Kuma & Associates have recently designed the Hans Christian Andersen Museum in Denmark, scheduled to open in the summer of 2021, and October 2021 will also see the opening of The Waseda International House of Literature – a public library that will house the archives of celebrated Japanese author Haruki Murakami.