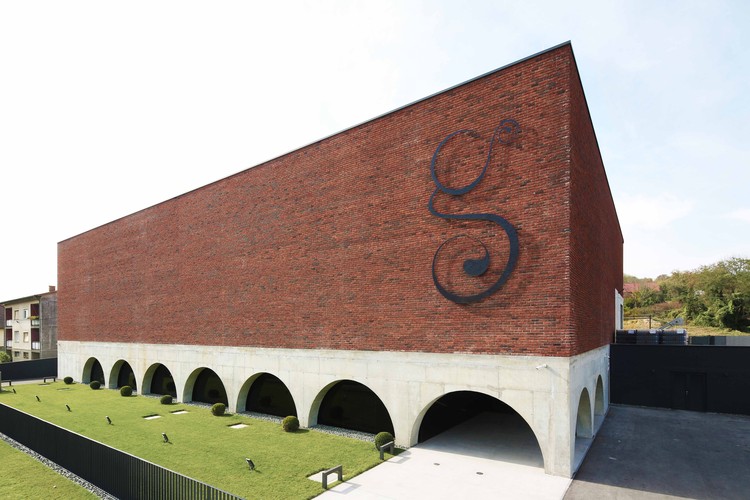 Text description provided by the architects. The winery in Kutjevo appears as the development of a previously designed winery in Radovanci. The new building is located in the center of Kutjevo town and due to a switch from a completely natural environment to a very urban one, there has been a complete turn in the architectural design as well. A simple and clear architectural design is inspired by the traditional wine cellars and the indigenous country houses. The surrounding houses are built on concrete pedestals, which mostly remain unfinished and rough; on the other hand, the walls are made of brick that eventually gets patina and a robust appearance. By applying these principles and materials, the house attempts to fit in the main city street where it is built.

A shift from tradition occurs in the layout of the winery. The barrels are traditionally placed under the ground in the wine cellars; however such design was not possible due to the natural configuration of the terrain, but also because of the desire for the direct contact of the barrels and the interior space with the street and people passing by.  Therefore, the barrels are placed in the shade of dark glass and massive concrete arches that open the winery towards the street. The oak barrels within the “shop window” form a buffer zone between the interior and exterior.

Above the concrete pedestal, which houses facilities for the storage, presentation, and wine tasting, there is a production and storage area “dressed in brick” that is completely hidden from the street and only makes contact with the street through the backyard.