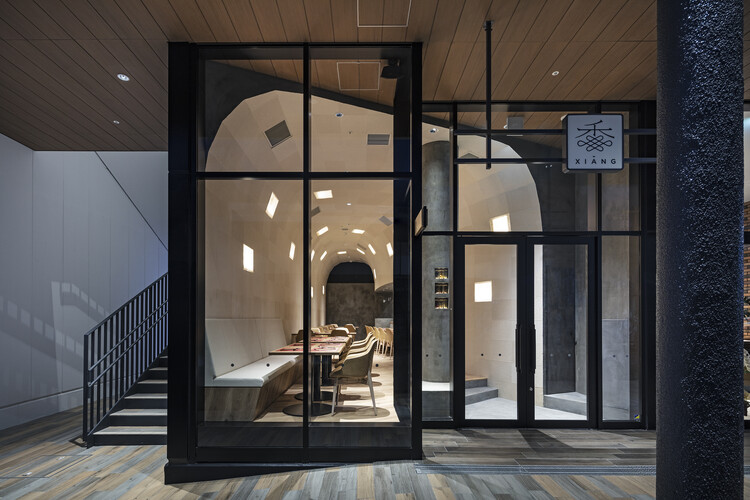 Text description provided by the architects. The interior design project for a Chinese restaurant recently opened in the new shopping mall located just in front of Matsuiyamate Station in Kyo-tanabe City, Kyoto. The design concept of the shopping mall is “the garden of the town.” The passage garden in the shopping mall is designed to create the continuity to the town, and it will be filled with greens in the future so the garden will be the forest that connects people with the town.

The restaurant that has the direct access to the passage garden is designed as the cave, full of the flavor of special spices, that can be the good background of the genuine Chinese cuisine. The cave has a wide opening at front and is gradually constricted to the other end so it achieves two things: inviting people passing by the restaurant and making guests feel comfortable with the encompassing interior.

Although the cave looks a complicated shape, it is geometrically calculated and made into the cluster of 2D polygons. This makes easier in terms of the preparation of the construction work, and consequently makes the construction work quicker. This grid system is also easier in terms of the allocation of inevitable additional elements, such as the louver of ventilations, that tend to look disordered in complicated interior walls and ceilings.

The name “xiang” has a meaning of flavor in Chinese. Instead of stones or clay, the finishing of the cave is made of the combination of several types of Japanese paper to reflect the image of flavor that can be associated with warmness or steams. All the Japanese papers used in the project are handmade, and there are slight differences in thickness or pattern of the surface in every single cut of each type. The unevenness of the Japanese paper embodies the flavor, and the lighting behind the Japanese paper further emphasizes the texture. Other parts of the interior consist of black ink mortar or flat-grained wood to consistently create the unevenness.