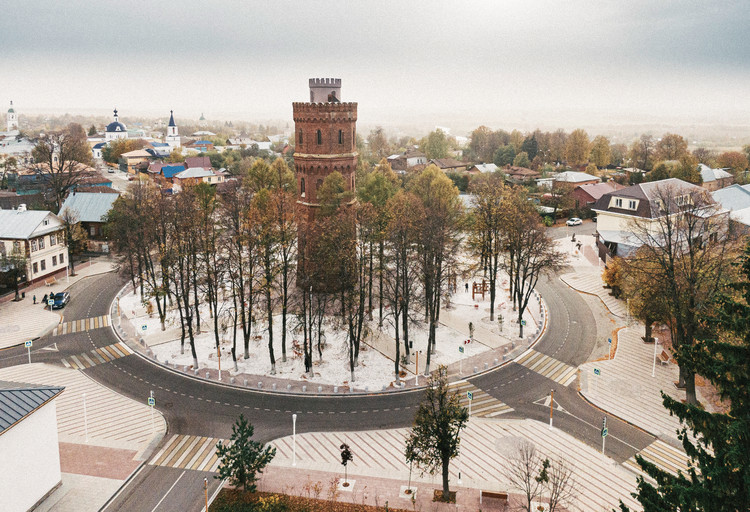 Text description provided by the architects. The year 2016 became the turning point in Zaraysk’s urban history. The administration and the investment center have launched the program for the revitalization of the historical center of Zaraysk. It implied the establishment of the municipal project office for tourism development. The key point of the program was to involve business in this sphere by offering them favorable conditions for investment in historical buildings. Another focus was on urban renewal. The latter began with the restoration of the hundred years old water tower, which happened through donations from local businesses.

However, the most impressive and complex project was the extensive reconstruction of Krasnoarmeyskaya (former Ekaterininskaya – named after tsarina Catherine the Great) street which was once the main pedestrian and merchant arteria of the town.

The urban renovation planning concept by Peter Gordeev, Igor Chirkin, Paul Prishin and Alexander Pchelintsev has attracted the donation of the All-Russia competition of the best projects for developing a comfortable urban environment in small cities and historical settlements as well as the donation of the Moscow region government. 300 million rubles (about 4,3 million euros) were invested in the urban renewal thus creating an increased demand for real estate at the planning stage.

Krasnoarmeyskaya street is one of the main town streets, which links two 18th century squares. The first one is the square with the water tower, which forms the city landscape. Another one, Revolutsia square (former Market square), has been serving as the oldest market place in the town, where the 18th-century shopping arcades still can be found. The planning concept included the renovation of three main parts: two squares and the street connecting them.

Market Square. The first decisions were made to revitalize the square. The traffic on Sovetskaya and Krasnoarmeyskaya street has been restored. It also helped to reduce the huge and empty triangular area size. Thus, the square was linked to the only side of the triangle where the historical buildings remain, whereas roadways go along the sides of the square that are empty. This gave the space the potential to steadily develop and build capacity.

Water tower square.  The brick water tower, which resembles a middle ages donjon, is one of the main tourist attractions. A few planning decisions have significantly changed the nature of the space. Previously, this square was just an asphalt field, which was not that easy to cross. To do so, one should go straight across the road with no “legal” crosswalk. So first of all, several pedestrian crossings were added; then the roads were narrowed so it gave some space for parking places. At the same time, sidewalks were widened at the expense of non-functional green areas along with them. This decision helped to create a united long pedestrian route that crosses the square and connects the city center and the park named after war hero Victor Leonov and, on the other hand, gave some free space near the houses in front of facades.