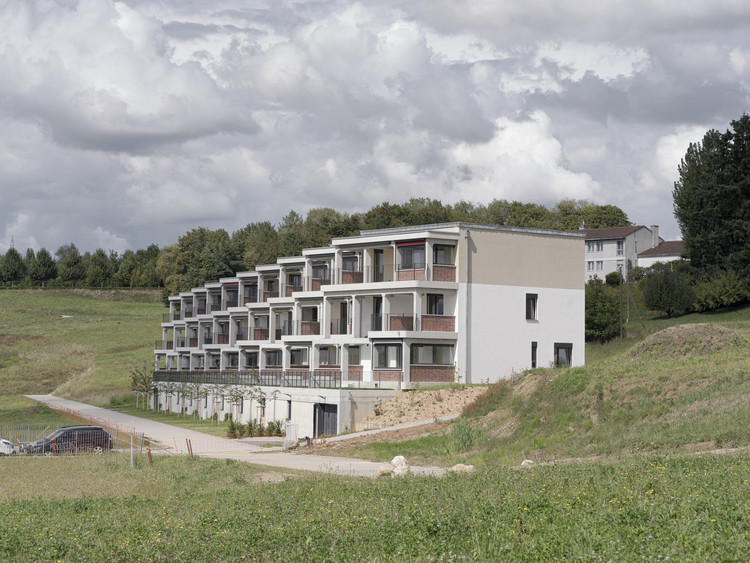 Context. Following the development of West Bussigny in the suburbs of Lausanne is planned for 3,000 inhabitants by 2030, the project is developing an alternative to densification and to the individual house by “grouped” type housing while avoiding a morphology of housing segmented only on the verticality. A mix of simplex and duplex typology while keeping a clearly distinct identity of housing units.

Concept. Ten volumes of 3 levels are deliberately oriented at 65° in order to optimize the orientation of the facade to the southwest. This volumetric play also makes it possible to create privatization of each exterior space of the dwellings. This offset means that the corners of these volumes are home to independent winter gardens. The architectural concept rigorously follows the will to mark volumes plastically in a suite or a repetition of units voluntarily marked on the street side so that the future inhabitants identify their dwellings not with a housing bar but with small houses of 3 levels joined together. The building thus develops linearly and parallel to the street over a distance of almost 100m. A grid structures the project and is reflected in the structure of the building for the stairwells and is identified by the structural entablature of the in-situ and prefabricated concrete terraces.

Typology. Within this framework, a multitude of typologies simplex or duplex is developed according to certain systematics. These different apartments can be superimposed, overlapped, or built into each other. This diversity of typology favors the social mix of all generations that responds to the challenges of our society.

Materiality. On the North-West side, the composition of the façade seeks a certain balance between volume, repetition, and a regulating layout of the openings. On the southwest side, a first plan is presented by a structure of pillars and entablature offset to the rhythm of the concrete grid as well as the filling with clinker brick and metal railings.

Environnement. The two air-to-water heat pumps avoid fossil fuels and supply the heating solely with the electrical energy from the photovoltaic panels. A double-flow air mechanical ventilation system will be installed to promote quality air and reduce micro-pollutants. The green roof of the building and the various meadows in the landscaping will encourage the development of biotopes while guaranteeing exemplary thermal comfort for the future inhabitants. In addition, personal vegetable gardens allow the land to be appropriated by all the apartments and promote social contacts.

This project, which is both individual and grouped, seeks to create a social and community myth almost in the form of a new, contiguous small village of yesteryear.