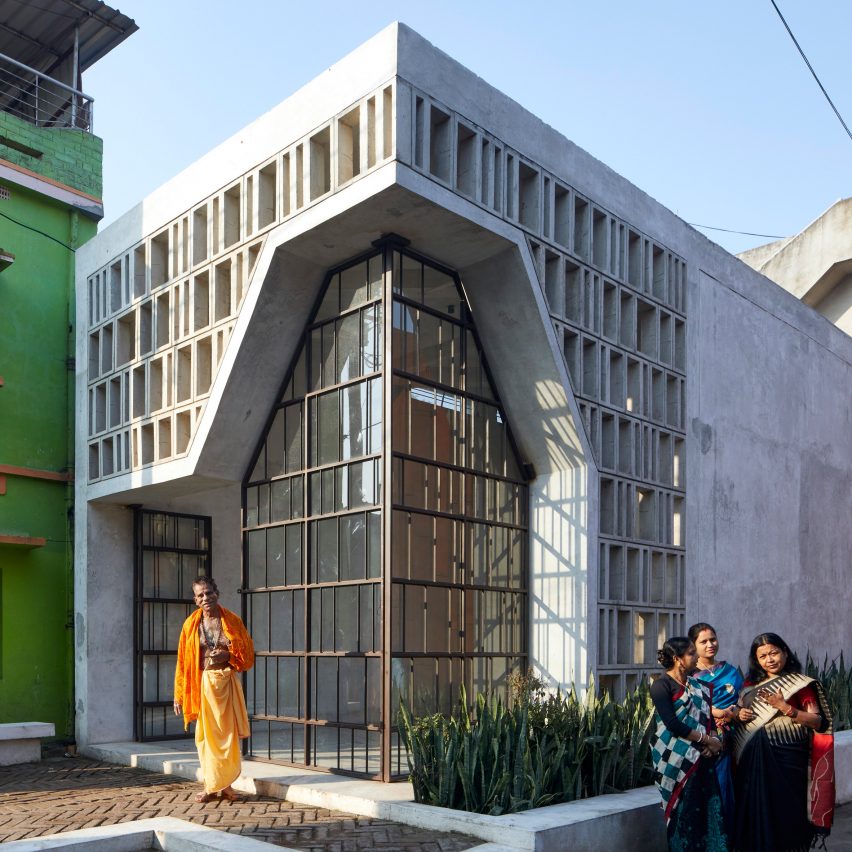 Narayantala Thakurdalan by Indian practice Abin Design Studio is a concrete Hindu temple with a glazed corner that opens onto the street in Bansberia.

Precast concrete jalis, or lattices, are stacked to create a screen wall around part of the shrine.

The column-free space allows for unobstructed access for worship, and during festivals, via a wide door on one side.

If all the glass doors are opened, the whole external corner can be opened up to turn the interior and the plinth into a larger gathering place.

Abin Design Studio was working on a residential project called Wall House next door on this busy intersection when it was asked to redesign the existing thakur dalan.

This covered courtyard is next to the house but open to the public and hosts local religious ceremonies.

The architecture studio studied how people were using the space before presenting their proposal.

“Some people would offer their prayers twice a day while many visited only occasionally, how a few devotees spent considerable amounts of time offering obeisance while others simply bowed their heads from their cycles as they rode past,” said Abin Design Studio.

“This place of worship played a different role in each person’s daily life and this provided cues for the design of the space,” added the studio.

The porous facade allows people to have a visual connection with the shrine even in passing while maintaining a dedicated space for daily worship at a slight remove from the bustling intersection.

On high days and holidays with the open doorway, the temple can accommodate a crowd.

“Although the existing structure held immense sentimental value to the people of Bansberia, they were quick to take on our suggestion to rebuild completely when they saw how the new proposal respected the same idea and sentiment of the place,” it said.

Local craftspeople cast the concrete bocks according to specification.

While well-received by Bansberia, some local people took a while to acclimatise to the new temple.

“While the final outcome was well appreciated by the community, it must be noted that some feedback was received where it was felt that the previous structure, having had a long-term association with the members, seemed more ‘at home’ than the new one,” said the studio.

Abin Design Studio was founded by Abin Chaudhuri in 2005. The studio’s recent project Wall House was longlisted for ArchitectureAwards 2019.

More design for temples includes a stepped Hindu temple made from black limestone in Andhra Pradesh and a top-heavy concrete Buddhist temple in Tokyo.

Photography and video are by Edmund Sumner, music is by Craig Pruess.