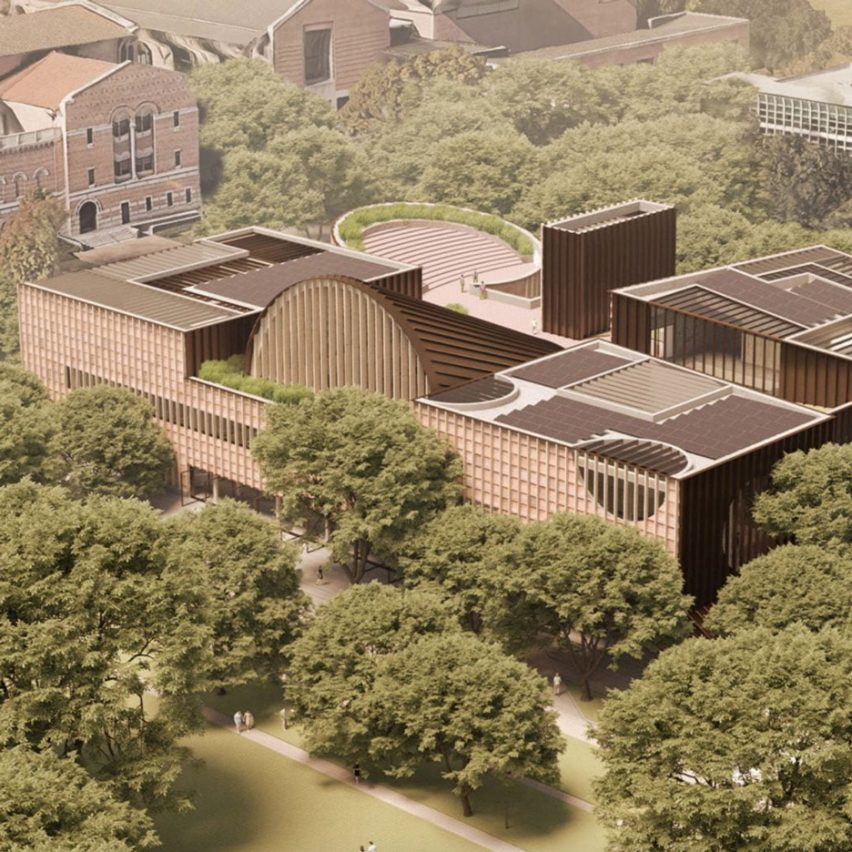 An outdoor auditorium will top the student centre that Adjaye Associates is developing for Rice University’s forested campus in Houston, Texas.

Adjaye Associates’ proposal is hoped to become the new heart of the 121-hectare campus and will incorporate a distinctive rooftop auditorium, alongside a multicultural centre that supports the diversity and inclusion of students.

“This is an important and inspiring project for Adjaye Associates and we look forward to collaborating with Rice to imagine a new campus anchor point that engages its community in the most inclusive way possible,” said the studio’s founder, David Adjaye.

“Responding to the architectural history of the university, the city of Houston and the region, the student center will come to embody its position at the heart of the campus, fostering catalytic connections between undergraduates, graduates, faculty and staff activated in both the threshold and formalized spaces of the new building,” Adjaye explained.

Adjaye Associates’ proposal for the student facility was the winning entry of competition held by Rice University for which there were three finalists.

Though the university has requested that the majority of the existing student hub will be demolished, Adjaye Associates’ design will incorporate its original chapel and a memorial to 10 Navy Reserve Officers Training Corps students who died in a plane crash in 1953.

This reflects Adjaye’s well-known interest in memorial architecture, which was the subject of his recent Making Memory exhibition at the Design Museum in London.

Adjaye Associates has disclosed few details about the student centre’s design, though the visuals reveal its massing will be broken into a series of smaller volumes, unified by an earthy-hued gridded facade.

Alongside the oval-shaped auditorium, the rooftop will also incorporate green space and solar panels.

A visual of the multicultural centre reveals that it will have a neutral material palette, lined with curving timber walls.

Construction is expected to begin on site in 2022, with Adjaye Associates working alongside Kendall/Heaton Associates and Tellepsen.

British-Ghanian architect Adjaye was named as the recipient of the RIBA’s Royal Gold Medal 2021 in September.

Once Rice Memorial Center complete, it will be the second building at Rice University to have been designed by a winner of RIBA’s Royal Gold Medal, following the completion of Anderson Hall by James Stirling in 1981.

Last year, Adjaye’s firm completed a contemporary art centre Ruby City in San Antonio, Texas. The building has an angular, red concrete skin based on a dream of its patron, philanthropist Linda Pace.