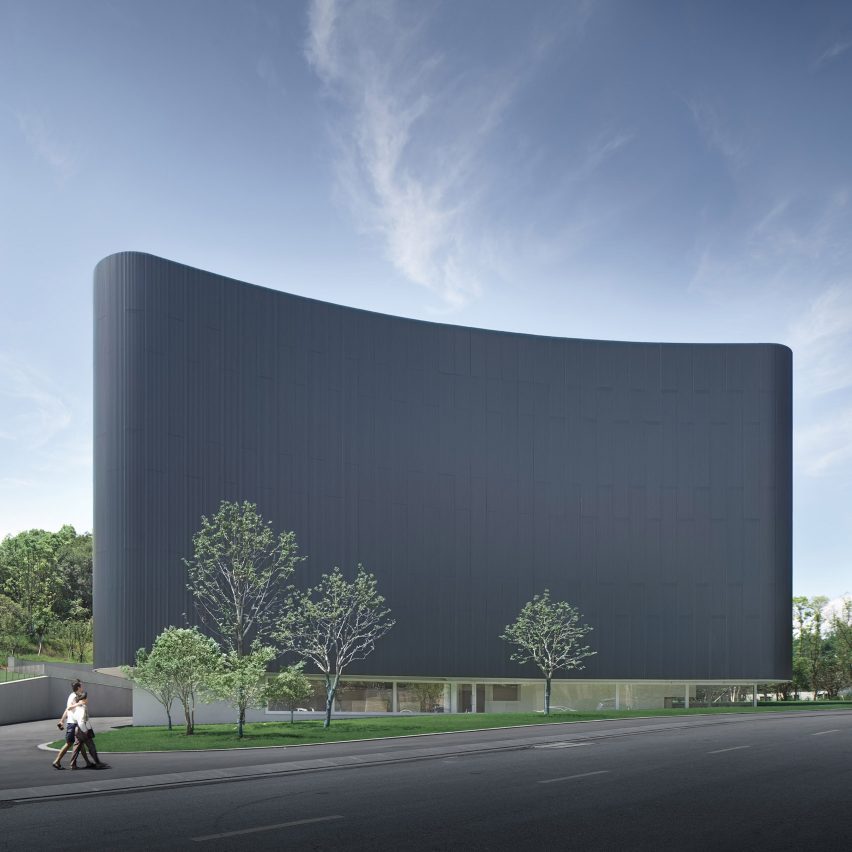 Black corrugated metal wraps the undulating, windowless walls of the Humao Museum of Art and Education that Álvaro Siza and Carlos Castanheira have completed in Ningo, China.

Set on the banks of Dongqian Lake, the minimalist museum was designed by Pritzker Prize-laureate Siza with fellow Portuguese architect Castanheira to evoke an ambiguous floating object.

Its black metal shell, which is elevated on a concrete plinth, conceals unexpectedly bright and spacious interiors that include a maze of ramps and white-walled art galleries.

“It’s is a small museum that is immense inside,” said Castanheira. “Leaning against on the hillside, its undulating form hovers above the ground.”

“It is intriguing in its elegance and in its mystery,” he continued. “Nothing is obvious in this little building.”

The only glimpses of activity inside are offered through slithers of glazing along the building’s set-back concrete base that contains a foyer and basement.

MoAE’s distinctive curved facade works in tandem with the external landscaping to guide visitors around the site to locate its small, discreet entrance.

The entrance opens into the heart of the museum, where there is a large white-walled void. This extends the full height of the building and is encircled by a maze of ramps.

According to Castanheira, the stark contrast between the museum’s exterior and interior is intended to give visitors a feeling of being “released into a vast space” upon entering.

“The public entrance is reached after passing around the form of the building and experiencing an imposed, absorbing compression, to then be released into a vast space, the full height of the building, where a snaking ramp links all the floor levels,” he explained.

“This diversity in routes and the interconnection of spaces makes this small building vast inside.”

The ramps that wrap around the void form the museum’s main circulation route and provide access to the art galleries, which contain a range of old and contemporary Chinese paintings and sculptures.

A large oculus at roof level illuminates the void.  With the help of the white surfaces, it filters natural light into the windowless exhibition spaces through geometric openings in their walls.

The museum is complete with a secluded rooftop area, set-back from the edge of the museum to create a hidden roof terrace overlooking the lake.

Portuguese duo Siza and Castanheira’s completion of the Humao Museum of Art and Education follows their collaboration on the red sandstone International Design Museum of China in Hangzhou, eastern China.

They also previously created the Mimesis Museum in South Korea, which features a sinuous concrete wall that wraps around a central courtyard.

Elsewhere, Siza also recently completed a travertine housing development in Lombardy with COR Arquitectos and the built a ceramics pavilion with a thatched roof for the artist retreat Casa Wabi in Mexico.